The Fatah movement has been growing closer to Turkey while its ties with Cairo seem to be deteriorating. 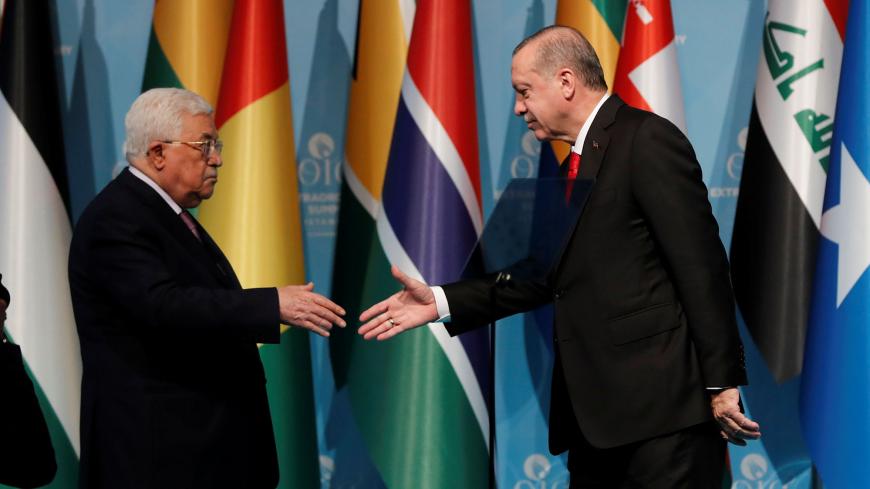 It's no love affair yet, but the relationship between Turkey and Fatah seems to be warming up.

Fatah’s branch in Turkey held its general congress March 20 in Istanbul, drawing Fatah members from various Turkish cities. The congress focused on the political situation of the Palestinian cause and stressed Palestinian President Mahmoud Abbas’ rejection of any political project that undermines national rights. The talks also called for optimizing relations between Palestinian and Turkish institutions in general.

The summit's location highlights the coordination and improved relations between Fatah and the Turkish government and Fatah leaders have made numerous trips to Turkey in recent months. Members of the Palestinian Legislative Council representing Fatah visited Turkey in January and met with President Recep Tayyip Erdogan and Foreign Minister Mevlut Cavusoglu to address Israeli policies in Jerusalem and ways of countering the US decision to recognize Jerusalem as Israel's capital. Israel, despite its favorable economic relations with Ankara, has been a uniting factor between Fatah and Turkey.

Erdogan also gained popularity among Palestinians by holding an extraordinary Islamic Summit in Istanbul in December during which Abbas gave a speech in response to Washington's Jerusalem decision. Also, Cavusoglu announced Dec. 15 the opening of the Turkish Embassy to the Palestinian Authority in East Jerusalem, while much of the world refuses to recognize the Palestinian state.

The warming hasn't smoothed all the relationship's bumps: Fatah criticized Turkey in February, accusing it of deepening the Palestinian division by hosting a mass conference for Palestinians abroad without the knowledge of the PLO. But by and large, Fatah and Turkey appear cozy.

Turkey could be seen as a supporter of Fatah's rival Hamas and hosts dozens of the Hamas movement's cadres, but “Turkey has close relations with the various parties in the Palestinian arena because it deals with them … as a state, not as political parties," Faed Mustafa, Palestinian ambassador to Ankara and a member of the Fatah Revolutionary Council, told Al-Monitor. "Turkey seems to be on good terms with all Palestinian parties, especially Fatah and Hamas, and doesn't favor one party over the other. … Turkey has strived to bridge the rift between conflicting parties and achieve reconciliation since the start of the Palestinian split in 2007.”

Still, ties between Fatah and Turkey improved significantly when both disapproved of the June talks between Hamas and dismissed Fatah leader Mohammed Dahlan, which were held under Egyptian auspices.

Those talks focused on community reconciliation in Gaza to provide compensation to families of Fatah and Hamas members killed or wounded in the armed conflict between the movements in 2007 ahead of Hamas' takeover of the Gaza Strip. The meetings between Hamas and Dahlan won no acclaim within Fatah or in Turkey, which are both hostile to Dahlan. He was dismissed from Fatah in 2011 for allegedly conspiring against Abbas and was never allowed back. Meanwhile, Ankara has accused Dahlan of taking part in the 2016 failed coup against Erdogan.

Mahmoud al-Rantisi, a researcher for the SETA Foundation for Political, Economic and Social Research in Turkey, told Al-Monitor, “Turkey perceives that the Fatah-led PA is a legitimate representative of the Palestinian cause before the international community and that it is easy to communicate with.”

He added, “Although Turkey's relations with Hamas are very strong, especially when it comes to Erdogan’s relationship with the former head of Hamas’ political bureau Khaled Meshaal, the US recognition of Jerusalem as the capital of Israel in December 2017 has brought Turkey and the Fatah-led PA closer, which has not negatively affected Ankara’s ties with Hamas.”

A Hamas official told Al-Monitor on condition of anonymity, “The Turkish policy toward Palestinians sets a positive example on how to deal with all parties to better serve the Palestinian cause. We are pleased to see channels of communication open between Turkey and Fatah as well as all other Palestinian factions.”

The source added, “Turkey’s vision exceeds a mere relation with a single party. This is why Hamas has no issue with the Fatah-Turkish relations; on the contrary, our movement welcomes such ties.”

Tayseer Nasrallah, a member of the Fatah Revolutionary Council, told Al-Monitor he also believes Hamas and Fatah both accept the other's relations with Turkey. “We feel that Turkey maintains balanced relations with both Fatah and Hamas, although the [Justice and Development Party] is close to the Muslim Brotherhood’s ideology, of which Hamas is a wing, but the Turkish state deals with the PA and Fatah as official bodies [representing Palestinians] before the world. Add to this, there is chemistry between Abbas and Erdogan.”

Nasrallah noted Palestinians' interest in remaining close to Turkey, "given that it is a pivotal regional state with great importance in international politics."

The PA welcomes Turkey’s role in relief and development. Ankara's annual assistance to Palestinians ranges from $10 million to $20 million. In 2015, the two had a bilateral trade volume of about $84 million, according to the Turkish Ministry of Foreign Affairs. Turkey reaped the lion's share of benefits, exporting $82 million in goods to the Palestinians while importing only $2 million of their goods.

It seems that as Fatah's relations with Turkey have improved, the movement’s ties with Egypt are growing weaker, as expressed most recently March 1 by Fatah Central Committee member Jibril Rajoub in his criticism of Egypt's role in the languishing Fatah-Hamas reconciliation.

After Rajoub was denied entry to Egypt in February, a good number of Fatah leaders were banned as well. It's a sign of the tension prevailing over Egypt-Fatah relations and explains the movement’s willingness to enhance ties with other countries in the region such as Turkey.