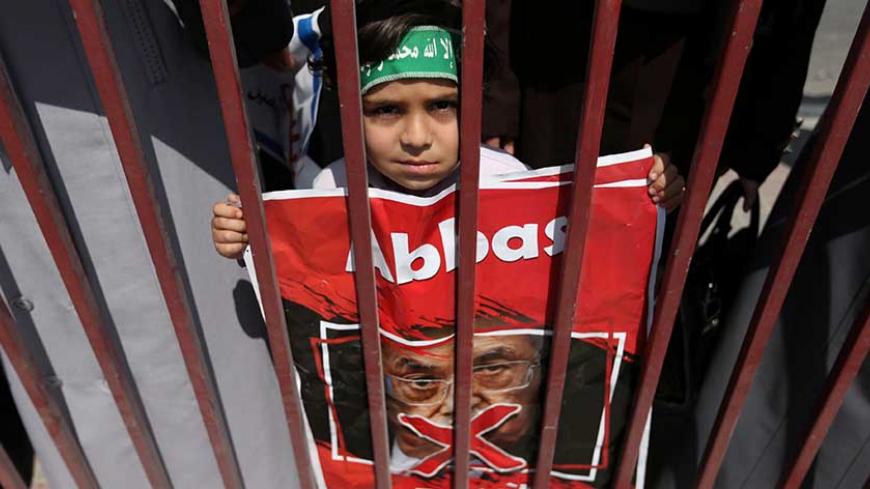 A Palestinian boy holds a poster depicting a crossed-out Palestinian President Mahmoud Abbas during a protest against the blockade on Gaza, central Gaza Strip, May 2, 2017. - REUTERS/Ibraheem Abu Mustafa

One can understand and respect the refusal of Palestinian President Mahmoud Abbas to revoke the law requiring the PLO to financially support the families of Palestinian prisoners serving time in Israeli jails. After all, why should the sin of a Palestinian terrorist from the West Bank town of Jenin be visited on his son when the family’s breadwinner is put away? Why should the daughter of a Palestinian woman who stabbed an Israeli soldier go hungry? On the other hand, it’s hard to understand and respect the campaign by Israeli Prime Minister Benjamin Netanyahu against the Palestinian payments to the prisoners’ families. The descendants of Israel’s biggest terrorists, among them the children of Baruch Goldstein who massacred 29 Muslim worshippers in Hebron in 1994, and the son of Yigal Amir, who assassinated Prime Minister Yitzhak Rabin in 1995, were rightfully entitled to child support from Israel’s National Security Institute.

One can also put up with the Palestinian custom of commemorating the names of friends they consider “freedom fighters” and “heroes of the struggle for Palestine,” although Israel views them as “terrorists” and “murderers.” Netanyahu, who regards this tradition as "sedition," obviously knows that dozens of town squares and major streets throughout Israel are named after “members of the undergrounds.” That is the term used for Jews who murdered women and children in mass terror attacks against the British rulers of Palestine and the Arab enemy before Israel gained independence in 1948. In addition, members of the “Jewish Underground” who murdered innocent Palestinians in the 1980s are not serving several life sentences. They received pardons, and one of them is even the editor of a well-known Israeli newspaper: Haggai Segal, editor-in-chief of Makor Rishon.

Just as one should understand and respect Abbas’ attitude toward prisoners’ families and the commemoration tradition, one should harshly condemn the cruelty he displays toward 2 million of his own people living for the past decade in the world’s biggest prison: the Gaza Strip. Did his hand not shake in April when he signed the order that effectively shut down the only power station operating in Gaza?

How evil does one have to be to ask the same country occupying his people’s land for 50 years to reduce the amount of electricity it supplies the Strip down to three hours of power a day? This is in addition to existing Israeli restrictions on Gaza that limit bringing in power generators, transformers and vital equipment to repair the grids that have collapsed under the heavy load on the power lines in the Strip. What crime did newborn Gazan babies commit for Abbas to cut off power to their incubators and to patients whose lives depend on medical equipment? Is everything acceptable in the struggle against Hamas?

The humanitarian crisis in Gaza did not bring out masses of Palestinians to protest in front of Abbas’ home to demand the resumption of power supplies to Gaza. The campaign against the evil Israeli-Palestinian initiative was actually launched by 16 civil society nongovernmental organizations in Israel. In a letter to Attorney General Avichai Mandelblit, the organizations warned that the Defense Cabinet’s decision to accede to Abbas’ request regarding the reduction of power supplies to Gaza was illegal under Israeli and international law. At the end of the letter, attorney Osnat Cohen-Lifshitz, head of the legal department of Gisha, noted that while it cannot be denied that the Palestinian Authority (PA), the acting Gaza government, Egypt and the international community were responsible for the dire situation in Gaza, Israel also bears significant responsibility. As the letter underscores, the Supreme Court has ruled in the past that the 2005 Israeli withdrawal from the Gaza enclave that it occupied for 38 years did not absolve the Israeli leadership of all responsibility for its residents.

While formal legal responsibility lies with Israel, the Palestinian leadership bears the greatest moral and ethical responsibility for the situation. How will Abbas be able to claim that Israel is abusing his people by imposing on them collective punishments in the name of security reasons, when he himself is asking it to use the very same means for political reasons? How does he expect the Israeli public to place its trust in a leader who treats his people so cruelly, and to demand that its elected representatives take the necessary risks entailed in handing him territories for a future Palestinian state?

Israel and the PA do not seem to have learned a thing from the bitter lesson of the first Lebanon War (1982) that external pressure on civilians was not the way to unseat those in power. The crisis in Gaza is far more complex than the situation was in southern Lebanon in the 1980s. The odd couple, Netanyahu and Abbas, find themselves damned if they do and damned if they don’t. On the one hand, if they keep up pressure on Gaza, its Hamas rulers might conclude that they have nothing to lose. When the volcano erupts, the burning lava will pour into the West Bank and reach Israel’s doorstep. On the other hand, if pressure on Gaza is lifted without any diplomatic advancement, Hamas will gain power in the West Bank. This, in turn, will result in the PA’s collapse, an end to security cooperation with Israel and an outbreak of violence. The recent Hamas victory in elections held in the West Bank Birzeit University, despite the organization’s shaky status, is indicative of its strength, at least among young Palestinians, who constitute a majority in the West Bank.

It’s time Israel recognized that its policy of segregating and isolating Gaza has failed. Hamas has not surrendered, and the Strip’s 2 million besieged residents are not going to overthrow it. The right and just way to weaken Hamas and ease the distress of Gaza’s population was and still is in advancing a diplomatic arrangement with Abbas. In this respect, lifting the blockade on Gaza and even building a seaport there could rehabilitate the PA’s standing in the Strip and slightly ease the anger at Israel. If Israel has accepted Abbas as a partner in punishing Hamas, why is Netanyahu going out of his way to rule him out as a partner for a negotiated arrangement with Israel? After all, one makes peace with enemies, but one doesn’t get to choose them. US President Donald Trump appears to understand this old adage. Otherwise, he wouldn’t have sent his close adviser Jared Kushner to Israel this week (June 21) to try and jumpstart negotiations.