Much more than power at stake in Israel-Hamas electricity standoff

With Palestinian President Mahmoud Abbas announcing that he will stop financing Gaza's electricity needs, Israel must decide whether to save Gaza's residents and the Hamas regime with them. 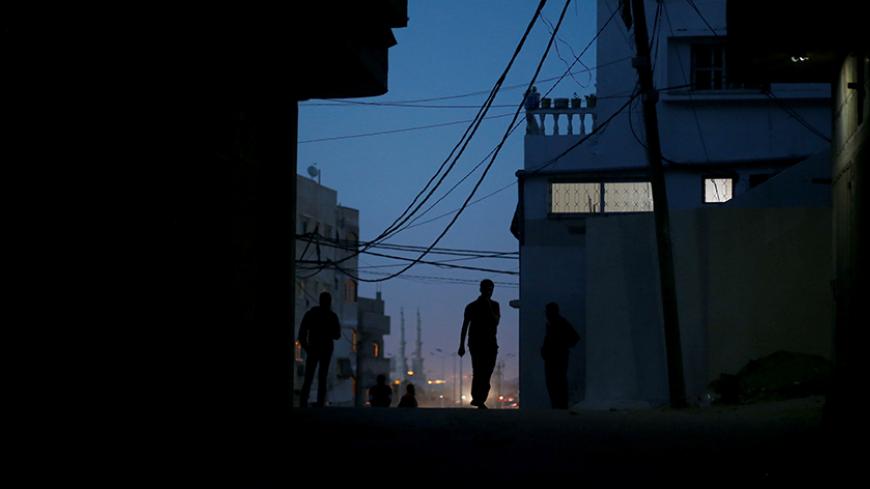 It seems real this time. Barring a last-minute turnaround, the Gaza Strip will find itself in the worst humanitarian crisis it has known since the 2007 revolution that brought Hamas to power, with disastrous repercussions for its 2 million residents and for Israel.

On April 27, the Palestinian Authority (PA) informed Israel’s Coordinator of Government Activities in the Territories that it was immediately cutting off funding for Gaza's power supply. Not only will it no longer buy diesel fuel to operate the Gaza Strip’s one and only power station — the PA stopped doing so several weeks ago — it will stop footing the monthly bill for the power supplied by the Israel Electric Corporation to Gaza.

Data published by the Israeli human rights group Gisha indicate that Israel currently uses 10 high-voltage power lines to provide 80% of Gaza’s electricity consumption — some 120 megawatts — at an estimated monthly cost of some 40 million Israeli shekels ($11 million). Israel deducts the cost from the taxes it collects for the PA. In September 2016, the PA signed an agreement with the Israeli Finance Ministry on resolving a debt of 1.78 billion shekels ($491 million) it had accrued to the Israel Electric Corporation, in installments to be spread over five years.

The PA’s announcement is not necessarily the result of economic constraints. Palestinian President Mahmoud Abbas made the dramatic decision to cast off all responsibility for Gaza after the new Hamas leader there, Yahya Sinwar, established a committee to run the daily affairs of the Gaza Strip. Thus, Hamas effectively completed the removal of the PA from Gaza. It is not entirely clear what got Abbas so angry, given that since the revolution, the PA has not been allowed to exercise any military or civilian power in the enclave. The prevailing view is that Abbas got sick and tired of propping up the Hamas rulers: While the PA was transferring money each month to pay the salaries of tens of thousands of its former employees in Gaza, fund power supplies and maintain public facilities, most of Hamas’ financial resources were being used for its military buildup and the digging of tunnels to be used for terror attacks against Israel.

And so, this month, the PA started to gradually cut the pay of the tens of thousands of its unemployed former staff. It also announced that it had stopped paying for the maintenance of the medical facilities in Gaza and for medical equipment and medicine. “This is undoubtedly the start of a humanitarian crisis, which the Israeli defense system did not take into consideration even in its worst-case scenarios,” a source in Israel's civil administration of the West Bank told Al-Monitor on condition of anonymity. Israel will have to quickly make a series of decisions on this issue, he added.

On one hand, clearly Israel cannot fund Hamas' rule — for example, by providing it with free electricity and money for the maintenance of Gaza’s medical and civilian institutions. On the other hand, turning off the lights there and now is not feasible. “People will die there,” said the Israeli source. “Disease will break out from contaminated water because they won’t be able to purify drinking water and treat waste. And that’s just one example. A total blackout will result in a collapse of all the civilian systems in Gaza, which means a health and environmental threat to Israel, too, not to mention its military implications.”

Abbas has presented Israel with a major dilemma. Any move it makes to forestall a humanitarian crisis in the Gaza Strip will serve as a lifeline for Hamas. As it is, the Hamas government has already become Israel’s only option. After the 2007 revolution, Israel formulated a defense strategy that views the removal of Hamas by economic or military pressure as having graver consequences than keeping it in power. That’s why in the 2014 Operation Protective Edge, Prime Minister Benjamin Netanyahu decided on the advice of defense officials not to target the collapse of Hamas but rather to create deterrence. Deterrence was achieved, albeit at a heavy loss of life. And the cease-fire between Israel and Hamas has been maintained for the past three years, though occasionally some renegade groups manage to fire off a few rockets at Israel and disrupt the peace.

Now that Abbas is cutting himself off from Gaza, Israel’s strategy is unlikely to hold up. “Hamas will not give up power,” a Palestinian source in the West Bank city of Ramallah told Al-Monitor on condition of anonymity. “They will do all they can to maintain their rule,” including engaging in another round of fighting with Israel, whatever the cost.

“An economic crisis will not bring down Hamas. They will not give in and tell Abbas to come and take back the keys,” a senior Israeli civil administration official told Al-Monitor on condition of anonymity. The official said Hamas would even prefer to be brought down by an Israeli military operation, gaining a heroic excuse for failing to take care of its people as promised. “This is the extent to which the insanity prevails there,” he added.

The Palestinian source believes a solution will eventually be found. He said, “Israel would not dare cut off power, and in cooperation with Egypt, the international community will be mobilized to pressure Abbas into taking back responsibility for Gaza.” Indeed, Hamas has called for international intervention to resolve the crisis.

But even if the humanitarian crisis is settled, it will only be a temporary measure. The PA itself is mired in debt and barely keeps its own institutions afloat. After 10 years, Abbas understands that he cannot and should not continue to fund the organization that kicked him out of Gaza. Meanwhile, Israel, which imposed a blockade on the Gaza Strip 10 years ago in hopes of bringing Hamas' rule to an end, is also now finding itself at a dead end. Sooner or later, it seems, Israel will be forced to suffer the consequences of its own ill-advised actions.