With the Palestinian Authority unwilling to pay for electricity in the Gaza Strip, Israel has become solely responsible for providing electricity to Gaza free of charge. 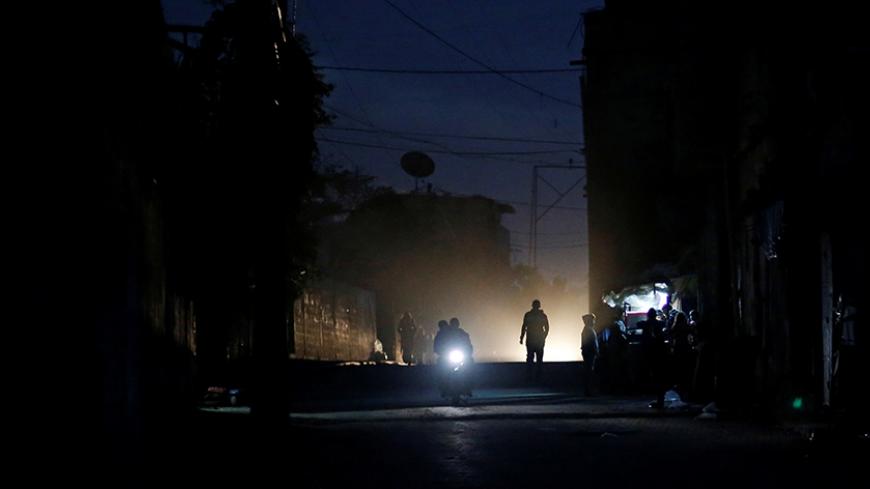 Palestinians ride a motorcycle during a power cut on a street in Beit Lahiya, northern Gaza Strip, Jan. 12, 2017. - REUTERS/Mohammed Salem

Maj. Gen. Yoav Mordechai, coordinator of government activities in the territories, is warning that Israel cannot keep supplying Hamas with free electricity, and in the coming days it will reduce the power supply to the Gaza Strip. In an interview with BBC Arabic, Mordechai explained that Israel is the sole power supplier to the coastal enclave because Gaza’s only power station has been crippled, due to a dispute between Hamas and Fatah regarding payment for the diesel fuel needed to get it running.

Mordechai said that Israel supplies Gaza with 125 megawatts (MW), enough for only four hours of power a day for residents, and had adopted a decision to increase the amount by 100 MW. Last month, Mordechai accused Hamas of stealing electricity from residents to fulfill its operational needs and for use by the movement’s senior officials.

Ever since the Palestinian Authority (PA) in Ramallah stopped paying for Gaza’s power in the wake of the decision by Palestinian President Mahmoud Abbas to cease PA involvement in Gaza, Israel has in fact been supplying Hamas' leaders in Gaza with power, for free. In the BBC interview, Mordechai claimed that top Hamas official Fathi Hamed, for example, has four wives, and power runs to the four separate homes he maintains 24 hours a day. Other residents have to make do with their four or so hours a day.

In January, Qatar transferred $12 million to the PA to buy diesel fuel for Gaza. At the same time, Turkish President Recep Tayyip Erdogan volunteered to help resolve Gaza’s persistent power shortage. These were all temporary measures. Last month, the money ran out, and the Gaza power station was shut down. By the way, none of the countries helping Gaza has offered to pay Israel for the 125 MW that it provides and that enables its residents and Hamas to survive, for the time being.

With Abbas having disengaged the PA from Gaza, Israel finds itself in a dilemma. On the one hand, Israel clearly should not be funding Gaza’s power consumption in lieu of Hamas and the PA. On the other hand, totally cutting power to Gaza would result in immediate humanitarian and environmental crises, which could deteriorate into a threat to Israel’s security. Hamas has threatened that should its grip on power be imperiled by a power cut, it would not hesitate to initiate an armed confrontation with Israel. This is how the absurd situation came about that Israel alone funds electricity in Gaza and indirectly keeps Hamas in power.

Mordechai’s remarks indicate that the Israeli military has decided that “enough is enough.” His threat is designed to force the issue, to generate a power crisis in Gaza that, Israel hopes, will result in international intervention and a solution to the problem. Although Mordechai points an accusing finger at Hamas, judging by past experience he knows that the organization will not lift a finger to resolve the problem and will not pay for the power.

As of this writing, none of the countries that have in the past helped pay for Gaza’s electricity are willing to assume responsibility for the situation. None of them are willing to engage as the sole party responsible for paying for the electricity of some 2 million Gaza residents.

In coming days, Israel will gradually reduce the extent of its electricity supply to Gaza in an effort to exert pressure on Hamas, Abbas and, to a large extent, the Arab states, which currently benefit from Israel alone funding Gaza’s power consumption. Israel hopes the induced crisis will result in the establishment of an international fund, with the participation of Arab states, Turkey and the European Union, that will ensure a permanent and steady power supply to Gaza.

Israel’s military authorities claim Hamas is totally unperturbed by the plight of the Palestinian population in Gaza. Hamas, which was formed in Gaza at the start of the first intifada in 1987, was initially perceived as a welfare organization dedicated to caring for the Palestinian population there mired in a perennial state of poverty and distress. In the 2005 elections, the Hamas Change and Reform list garnered a majority based on its leaders’ pledges to take care of residents and fight the corruption endemic among Gaza's rulers from Fatah. Those promises went unfulfilled, however.

The Hamas of today is unable to look after its constituents. The movement holds on to power by the use of force and looks to others to fund its activities. In this regard, Abbas is not blameless: It took a whole decade for him to wise up and stop paying the salaries of Gaza residents who worked for the PA but were made unemployed after Hamas threw him out of power in Gaza.

“In the case of Gaza, there’s a difference between the desirable and the factual,” an Israeli defense source concluded, speaking on the condition of anonymity. Since Hamas won’t pay for the power, he said, the only realistic way forward is to create an international fund to ensure a regular flow of electricity for the residents of Gaza.