Following his first meeting with US President Donald Trump at the White House, Palestinian President Mahmoud Abbas announced his intention to take unprecedented measures against Hamas, raising questions about the timing of such threats. 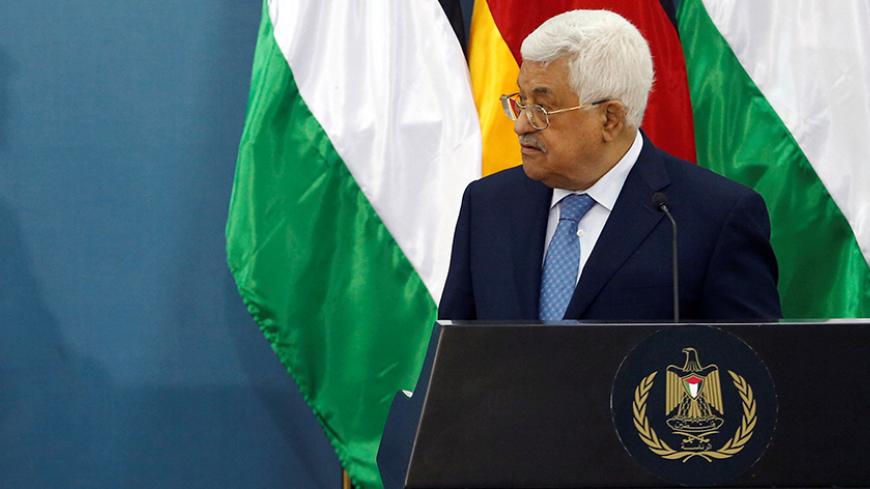 Palestinian Authority (PA) head Mahmoud Abbas met with US President Donald Trump in the White House for the first time on May 3. Shortly after, Abbas announced during his meeting with Arab ambassadors in Washington on May 4 his decision to take unprecedented and painful steps against Hamas, which Washington considers a terrorist organization.

Abbas said during his meeting with the Arab ambassadors, “I will take unprecedented steps against Hamas since it halted the [Fatah-Hamas] reconciliation. The measures will be painful if the movement does not take back its actions,” in reference to Hamas’ refusal to hand over the Gaza Strip to the consensus government.

The White House wrote in a statement issued after the meeting between Abbas and Trump: “President Trump emphasized the importance of making a clear commitment to preventing inflammatory rhetoric and to stopping incitement, and to continue strengthening efforts to combat terrorism.”

The Palestinians have many questions about the measures that Abbas will take against Hamas, and they are wondering why his threats coincided with his visit to Washington.

Although Abbas did not reveal the measures he would take against Hamas, Israeli Defense Minister Avigdor Liberman said in an interview with Army Radio on the evening of May 4, “Abbas is serious about halting power and water funding in the Gaza Strip, and he has every intention to stop paying the salaries of Palestinian Authority employees in Gaza.”

The PA pays Israel around 70 million shekels per month ($19.4 million) to supply Gaza with Israeli power, which provides 30% of the power in the Gaza Strip. Several media outlets, including Israeli Channel 10, revealed April 27 that the PA asked Israel to stop supplying power to the Gaza Strip through Israeli lines.

Hamas official spokesman Hazem Qassem condemned Abbas’ threats to the movement and told Al-Monitor, “Abbas made these threats when he was in Washington, which proves that they were the result of American demands.”

He added, “Abbas is trying to get Trump’s approval by punishing Hamas. Since Abbas received an invitation from the White House to visit … Abbas threatened to take punitive measures against Gaza to prove that he is the legitimate and sovereign leader of the Palestinian territories.”

On April 4, the consensus government made the sudden decision to slash PA employees’ salaries in Gaza by 30%. Observers considered this an attempt to ruin Gaza’s economy.

Israeli writer Zvi Bar’el, who is an expert on Palestinian affairs, wrote in an article published in Haaretz newspaper on April 29 that Hamas’ rule in Gaza and its refusal to empower the consensus government to control the city do not justify the PA’s measures against Gaza. Bar’el believes that Abbas’ measures served as dowry for Trump, who has made the war on terrorism one of his key foreign policy principles.

Bar’el said, “If Abbas wants to punish Hamas as part of a political process rather than a domestic step, this will help him convince Trump that he is fighting terrorism and that Israeli Prime Minister Benjamin Netanyahu is deluding Trump and the world when he claims that there is no Palestinian partner to negotiate with on peace. Abbas’ steps can also serve as a suitable response to Israeli allegations that Abbas does not represent Gaza and, therefore, cannot be a negotiating party.”

Qassem noted, “Clearly, the United States, Israel and Abbas want to remove Hamas from the political scene to give the negotiations the needed public and international momentum. But this will fail now, just like it always has.”

Abbas claimed that his threats were prompted by Hamas’ objection to the reconciliation, but Qassem refused this justification. He said, “Abbas is effectively impeding the reconciliation because he does not want to solve the Gaza employee crisis or activate the Temporary Leadership Framework of the PLO as per the reconciliation agreement signed in 2014. For this reason, I do not think the reconciliation deadlock prompted these threats. Abbas is trying to please Trump and push for resumption of settlement negotiations, which we refuse.”

Qassem added, “Hamas will not make any concessions under such pressure from Abbas. It will form a popular national front to reject the siege that Abbas is threatening to impose and will take regional steps to mobilize political and financial support for the Gaza Strip.” The term "siege of the Palestinian Authority" is a metaphor used by Hamas to describe Abbas' threats.

Political analyst and former editor-in-chief of Felesteen newspaper Mustafa al-Sawaf told Al-Monitor, “Abbas’ threats to Hamas are love letters to Trump. Abbas wants to be included in the US-Israeli alliance to eliminate Hamas and put Gaza at the mercy of his [Abbas’] settlement project.”

Sawaf expects these unprecedented measures to have life-changing effects, which means that “Abbas will take measures that affect the lives of people, like cutting power and water supplies, halting treatment abroad and banning welfare payments in Gaza in order to push people to reject Hamas.”

He added, “Abbas also wants to prove to Trump that he alone represents Palestinians and is the sole ruler and decision-maker in the West Bank and the Gaza Strip, knowing that Abbas’ legitimacy as Palestinian president has been over since 2010.”

Talal Okal, a professor of political sciences at Al-Azhar University in Gaza, agrees that Abbas’ threats aim at regaining legitimacy over Gaza and ending Hamas’ rule there to prove that he has the final say in any new negotiations.

Okal strongly ruled out a remarkable role for Trump in the history of negotiations with Israel. He probably can’t force Israel to implement international resolutions that are in the Palestinians’ interest, like UN Security Council Resolution 242, which states that Israel must retreat from the Palestinian territories they occupied in 1967.

He added, “My expectations are low for any new negotiations between Israel and Palestinians under Trump’s auspices.”

It seems that Abbas’ threats to punish Hamas will not benefit him much, as Hamas is still facing the Israeli blockade. He can’t even prove himself as the sole representative of the Palestinian people because Gaza is still under the rule of Hamas, which won the most parliamentary seats in the 2006 legislative elections.