Analysts fear the escalating tension between Hamas and Fatah will lead to an irreversible separation of the Gaza Strip and the West Bank. 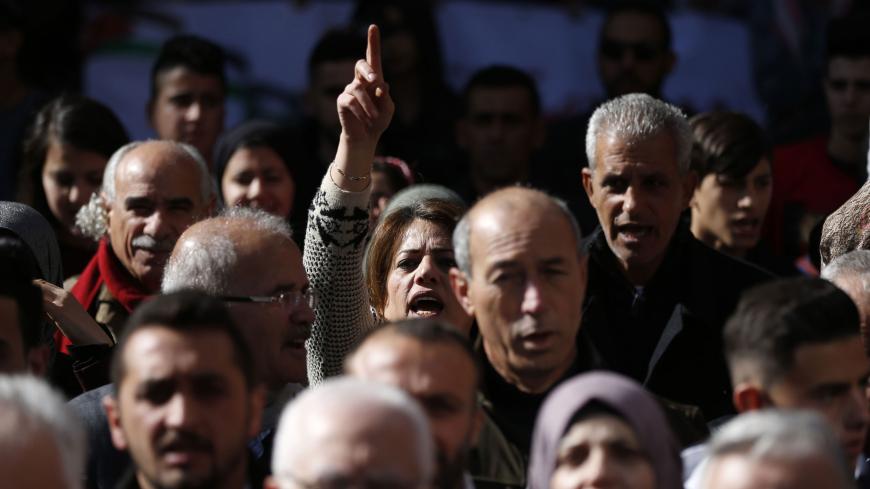 Palestinians march in the West Bank city of Ramallah, calling for the cessation of divisions between Fatah and Hamas and the unification of the West Bank and the Gaza Strip, Jan. 12, 2019. - ABBAS MOMANI/AFP/Getty Images

GAZA CITY, Gaza Strip — Tension between Hamas and Fatah has been surging, particularly since the latter accused Hamas’ security services in Gaza of cracking down on Fatah leaders and cadres after the Interior Ministry in Gaza refused to allow Fatah to hold a 54th anniversary celebration in the Gaza Strip.

Fatah spokesman in Gaza Atef Abu Seif said in a press statement Dec. 31, “Security services in Gaza have arrested more than 500 Fatah leaders and members since Dec. 30, 2018, against the backdrop of the movement’s activities for its 54th anniversary, which falls on Jan. 1 of every year.”

But on Dec. 31, a spokesman for the Interior Ministry in Gaza, Iyad al-Bozm, denied that Fatah members had been arrested, saying, “Thirty-eight people were summoned in order to maintain order and calm, and they were later released.”

On Jan. 2, Hamas accused the security services of the Palestinian Authority (PA) in the West Bank of arresting over 60 activists and leaders from the movement, but the PA did not comment on the accusations.

On Jan. 4, gunmen broke into the headquarters of the PA-affiliated General Authority for Radio and Television in Gaza City and destroyed its equipment.

On Jan. 5, the Hamas-run Interior Ministry announced in a statement the arrest of five “people involved in the attack,” all of whom were PA employees whose salaries had been recently cut off.

In early January, local media said the PA had cut off the salaries of a number of its employees in Gaza for supporting dismissed Fatah leader Mohammed Dahlan.

However, on Jan. 5, the General Authority for Palestinian Radio and Television held Hamas fully responsible for storming the broadcasting facility and destroying its contents.

Given the prevailing tension, the PA withdrew its staff from the Rafah border crossing in the southern Gaza Strip on Jan. 6. The Palestinian Civil Affairs Authority justified the withdrawal, saying it was a response to Hamas actions that hindered the staff’s work.

Hamas spokesman Fawzi Barhoum said in a statement Jan. 6 that the PA decision to withdraw its staff from the Rafah crossing falls within Palestinian President Mahmoud Abbas’ attempts to gradually separate the Gaza Strip from the homeland.

In November 2017, for the first time in 10 years, the PA took over the Rafah crossing from Hamas after the reconciliation agreement was signed the month before in Cairo. This was the only item in the agreement to be implemented at the time.

Mounir al-Jaghoub, a media official in Fatah, told Al-Monitor, “Hamas has crossed all the red lines by arresting hundreds of Fatah cadres in Gaza without any justification, in addition to preventing them from celebrating the movement’s anniversary.”

He blamed Hamas for what is happening in the Gaza Strip, including all the arrests as well as the attack on the headquarters of the General Authority for Radio and Television.

Jaghoub said Fatah contacted Egypt regarding the recent tension in the Palestinian arena to make sure efforts for reconciliation are ongoing in order to end the division, stressing that his movement will not allow any plan to separate the West Bank from the Gaza Strip.

He believes that accusations against Hamas are “false allegations to cover up the main crime of punishing Gaza and cutting salaries for many of its people.”

Qassem said the movement is always communicating with Egypt regarding reconciliation and keeping it in the loop about all developments. He said Hamas and Egypt also discussed the withdrawal of the PA’s staff from the Rafah crossing, and demanded that the movement handle the crossing’s administration at the present time.

Following the withdrawal of the PA staff from the Rafah crossing, Hamas immediately took over Jan. 6 and Cairo kept it open for only one direction, for those returning from Egypt.

Meanwhile, the Palestinian reconciliation remains stalled despite the great efforts exerted by Egypt and Arab countries in recent years to achieve it. They aim to end the division and the political estrangement between Hamas and Fatah that prevailed in the wake of the armed clashes that took place between members of the Palestinian security services and Hamas militants in June 2007, after which the movement took over the Gaza Strip.

Palestinian writer and political analyst Mustafa al-Sawaf told Al-Monitor that the steps taken by Abbas increased the ever-growing tension between Fatah and Hamas, and represent a prelude to separating Gaza from the West Bank, which would put an end to the Palestinian reconciliation altogether.

“Egypt is making an effort to end the division, but it does not want to take a decision that could show that President Abbas does not want reconciliation. On the other hand, it is keeping in touch with Gaza officials normally,” Sawaf said.

The Egyptian delegation is regularly visiting the Gaza Strip to discuss and reach an end to the Palestinian division. Most recently, on Jan. 10, it held a meeting with Hamas and another with Ahmed Halas, a member of Fatah's Central Committee, to discuss reconciliation.

Hussam al-Dajani, a professor of political science at Al-Ummah University in Gaza, told Al-Monitor, “Tension between Hamas and Fatah will lead to separating the West Bank from Gaza and destroying the Palestinian state project.”

Dajani said that should tensions persist, they will negatively affect Palestinian reconciliation and the division will turn into total separation; he said there must be immediate intervention from Cairo to stop this.

Meanwhile, citizens in the Gaza Strip fear that these differences will take their toll on them, especially as Fatah leaders and close associates of Abbas warn about further punitive measures against Hamas, which could affect every citizen in the Gaza Strip.