Palestinian President Mahmoud Abbas was already in trouble, before Israel’s campaign against Hamas in response to the murdered youth. 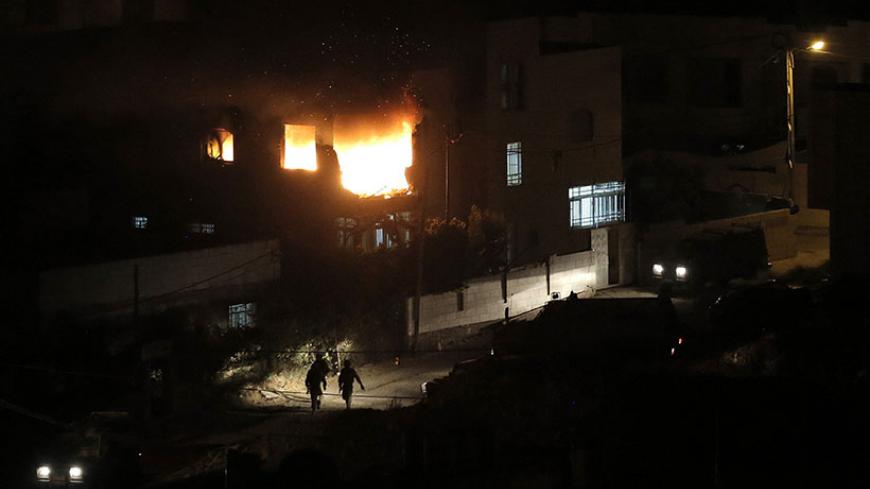 Israeli soldiers in Hebron patrol as flames are seen at the family home of an alleged abductor, July 1, 2014. - REUTERS/Ammar Awad

Can the Palestinian Authority (PA) survive an Israeli campaign to destroy the infrastructure of Hamas? This question is front and center on the agenda while Israel weighs its response to the murder of three settlers in the West Bank.

“This tragic ending must also be the ending of Hamas!” declared Deputy Minister of Defense Danny Danon shortly after the discovery of the victims was announced. “We have to destroy the homes of Hamas activists, wipe out their arsenals everywhere and stop the flow of money that directly or indirectly keeps terror alive. … Make the entire Palestinian leadership pay a heavy price.”

These are terrible times for the PA. Already attacked by Israel for reconciling with Hamas and criticized by its own people for cooperating with Israel’s ongoing campaign of arrests and closures in the West Bank, the notable resilience of the PA is facing its greatest challenge since Operation Defensive Shield in April 2001 erased the security boundaries that had acted as a brake on Israel Defense Forces (IDF) action in Area A, nominally under Palestinian control.

From the moment of its announcement, Israel’s Prime Minister Benjamin Netanyahu has demanded that PA President Mahmoud Abbas walk away from the reconciliation agreement with Hamas. Abbas’ criticism of the kidnapping and killing — actions that were welcomed in Israel — was counted as an “Israeli achievement,” according to Knesset member and former Shabak official Israel Hasson. “Abu Mazen [Abbas] is close to making a decision to end the relationship with Hamas. Our interest is to turn this failure [the killings] to our political advantage by dividing the PA and Hamas.” No matter who was responsible for the abduction and killings.

The need for what Minister of Construction Uri Ariel describes as an “appropriate Zionist response” to the murders sets the stage for an even more volatile confrontation. Zvi Hauser, former director of Netanyahu’s office, told Channel Two that Israel’s response in the coming days must be a “game changer. Israel must order the PA to dismantle all missiles in Gaza. If Abu Mazen won’t do it, then Israel must. The PA cannot stand aside and not do anything. The good cop-bad cop routine will not work.”

As this combustible situation unfolds, how vital is it to Israel that the PA continues to exist? Important to be sure, but less so than you might think.

There are three centers of power and influence regulating Israel’s interest in the PA’s existence: right-wing politicians, budget overseers and, most crucially, the security system.

All share the view that the PA’s value is measured solely against a yardstick of Israeli interests — at the top of which are security and settlement expansion.

And all agree, without any sense of irony, that Israel’s presence in the West Bank — that is, a continuation of its occupation — offers the PA its best, indeed, its only chance for survival.

In a speech on June 30, Netanyahu repeated this article of faith, noting that the evacuation of Israeli forces from the West Bank would lead to the collapse of the PA.

The most vociferous, and for now least decisive Israeli opponents of the PA, are politicians who regularly incite against it as a murderous organization obstructing Israel’s designs on the West Bank. The prime minister himself often finds himself in this club, whose membership has grown with the discovery of the dead teenagers. Others, like Minister of Economy Naftali Bennett, have long found a politically comfortable and permanent seat at this table.

Bennett often sets the tone for this camp. Emerging from a recent meeting of Israel’s security cabinet, the economy minister called Abbas a "mega-terrorist."

"A person who lines the pockets of murderers with tens of millions of shekels each month [referring to payments made to families of prisoners] is a mega-terrorist, who has not changed his ways," Bennett told Israel Radio. In his first reaction to the killings, he said, “Now is the time for actions; not talk."

Two authoritative and decisive voices for moderating Israel’s treatment of the PA and promoting its continued operation — the security establishment and the treasury — are arrayed against this lobby. Both argue that the PA’s existence, for all of its shortcomings, allows Israel to enjoy the best of all worlds … indeed a deluxe occupation. Israel settles without regard to ineffective Palestinian opposition. It enjoys the security advantages of competent Palestinian policing, trained and equipped by US and European officers — all this at no cost to hard-pressed Israeli taxpayers. And when deemed necessary, the IDF goes anywhere and everywhere, as it has in recent weeks, without so much as informing its vaunted Palestinian security partners.

“While we have undermined the PA repeatedly and constantly, this was no reflection of lack of concern with its possible collapse,” explained a former top Israeli official. “Indeed, time and again the announced withholding of taxes was preceded by delivery of future remittances. … Likewise, the 'under consideration' menu of 'penalties' for 'misbehavior' always exceeds actual deprivations or other punishments.”

“On security,” he continued, “it is the unanimous position of all security agencies that our ability to provide security shall be undermined to an unacceptable degree should the PA's coordination be undone. And these agencies are a powerful lobby” — and one that Netanyahu and his right-wing fire-breathers, for all their bluster, have not yet challenged. The popular Israeli fury at Palestinian responsibility for the killings, however, will no doubt increase the pressure on Netanyahu to act decisively against them.

Unlike Washington, Israel does not view the PA as a strategic destination, but rather as the latest, and if necessary dispensable, way station on a very long road in its campaign to defeat the ability of Palestinians to act in a sovereign manner. But the Obama administration’s views on the need to preserve the PA cannot be ignored by Israel. “Keeping the PA alive is a US redline,” explained a former top defense official.

Israel’s support for the PA is nevertheless conditional on PA actions that complement Israel’s drive to subordinate Palestinians — most importantly security cooperation, recently described by Abbas as “sacred.”

Abbas’ remarks were pilloried across the Palestinian spectrum. And public disenchantment with continuing security cooperation has resulted in public assaults on the Palestinian police themselves.

Such actions erode popular Palestinian support for the PA. As Israel’s campaign moves into high gear, continuing support by the PA leadership and institutions like the police for Israeli actions will become increasingly untenable, even personally risky. At best, such acts may win grudging acknowledgement from Israel but nothing more, even as they alienate the PA from its seething popular base.

For the last 50 years Israel has empowered — and discarded — a series of Palestinian partners in the West Bank and Gaza Strip, starting with the pro-Hashemite mayors it inherited after 1967. Israel has proven able to adapt very well to the challenge of enlisting Palestinians; the PA is only the latest and most successful partnership according to Israel's yardstick. But as the conflict between Israel and the Palestinians threatened to escalate, it would be a grave error to assume that Israel remains wedded as a matter of principle to the partnership with the PLO in place since 1993, or that policies of occupation and settlement won’t survive the passing of the PA.