Ten years after the Palestinian Authority was overthrown in Gaza, President Mahmoud Abbas has made it clear that he is tired of using PA money to keep Hamas afloat. 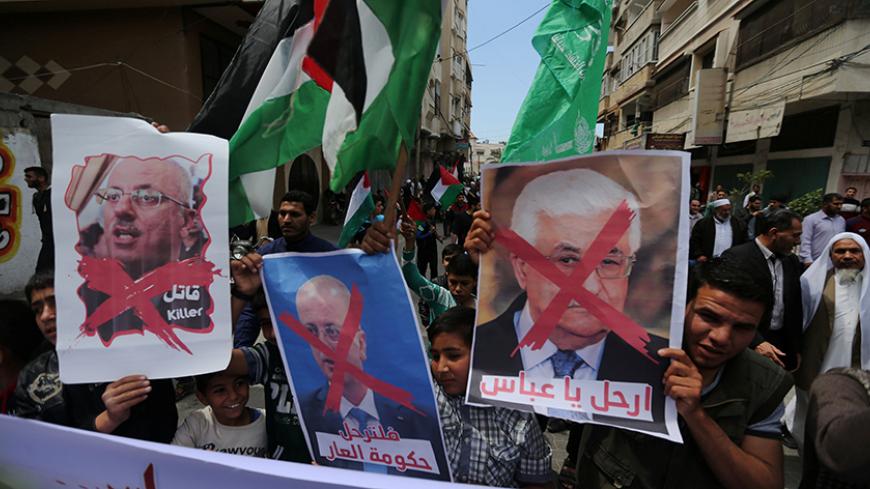 Even before the arrival of the Palestinian Authority's (PA) delegation to the Gaza Strip to discuss reconciliation between the Fatah and Hamas movements, the two sides had begun exchanging threats.

The delegation representing Fatah originally planned to travel from Ramallah in the West Bank to Gaza once Israel re-opened the Erez crossing that had been closed last week for Passover. But Palestinian President Mahmoud Abbas dropped a bombshell on Hamas leaders. Addressing Palestinian ambassadors gathered in Bahrain on April 13, Abbas said he was about to make far-reaching moves that would cement the split between Gaza and the West Bank. Abbas noted that Hamas had set up an administrative committee to run affairs in Gaza to replace the Palestinian government headed by Rami Hamdallah, and was thus perpetuating its rule in the Strip.

A senior Palestinian source in Gaza identified with the Fatah movement told Al-Monitor on condition of anonymity that Abbas is using the administrative committee established by new Hamas ruler Yahya Sinwar as an excuse for long-planned moves. According to the source, Abbas decided to cut the Fatah-ruled West Bank off from Gaza more than a year ago after concluding that Hamas would not cede its rule over the enclave. He was no longer willing to fund the regime that had overthrown his government in 2007.

Indications of Abbas’ moves to sever the West Bank from Gaza have long been evident. “Only a blind person would not have seen what we, the veteran Fatah people, clearly saw,” said the source. The first sign, he said, was the PA’s refusal to pay for the diesel fuel needed to operate the Gaza power station, resulting in a crisis caused by the ensuing power shortages. But the most significant indication was the pay cuts for PA staff in the Strip.

Since the 2007 Hamas takeover of Gaza, the PA has continued to pay its employees there, providing de facto funding for Hamas and helping ease its dire financial straits. Without the wages for tens of thousands of PA workers — including officials and members of the Palestinian security forces — who have not been allowed to work since the overthrow, the economic crisis in the Strip would have been much deeper and Hamas would likely have been unable to survive.

This arrangement, whereby the PA continued paying salaries of employees who are unable to work, was intended to be temporary. But a decade later, reconciliation between Hamas and Fatah does not appear likely. And so, as far as the PA is concerned, there’s no point in paying people who will probably never work in that position again. There’s certainly no point in making life easier for Hamas and helping it stay in power.

Hamas did, indeed, exploit the fact that PA headquarters in the West Bank city of Ramallah kept paying tens of thousands of unemployed Gaza residents who once worked for the PA. Hamas employed only those identified as Hamas loyalists. According to World Bank data, the 2014 unemployment rate in Gaza stood at 43%. Were it not for the salaries paid by the PA to its former employees, that figure would likely have reached 60% of the workforce.

This is the stick that Abbas has held over Hamas' head for years. But at the beginning of April, the PA cut 30% from the pay of its Gaza employees, and according to senior Fatah officials in Gaza on that payroll, their salaries will gradually reach zero. They say that Abbas has concluded that the continued funding of tens of thousands of unemployed Gaza residents for whom Hamas has shirked responsibility is a threat to the PA’s survival, and he must therefore divert all the funds at his disposal to the West Bank.

“This is his way to bring down Hamas,” said the Gaza source. “To create pressure on them in order to make them understand that they cannot continue … to rule Gaza and to get money that frees them from responsibility for health, education and welfare institutions. If Hamas wants to rule Gaza forever more, it must then assume responsibility.”

The question is why Abbas announced his unprecedented moves just as the reconciliation delegation was about to set out for Gaza. Fatah leaders in Gaza claim that it was a tactical decision designed to demonstrate that he wants reconciliation only on his terms — that Hamas accept his conditions for handing over control of the Strip to the PA.

The Fatah leaders in Gaza don’t believe Abbas’ threats will achieve the desired results. They are sure Hamas will not agree to cede control of Gaza and will not disarm. Abbas, for his part, will not accept the existence of a second army alongside the PA’s security forces, and therefore the obvious conclusion is to sever ties to the Strip, at whatever political cost that may entail.

The cost will be steep. The PA employees in Gaza who identify as Fatah supporters are furious with Abbas. For a decade they have been claiming that he had not truly worked to restore Gaza to the PA’s control and that he had abandoned its residents to their fate. According to them, now he is taking steps toward a total cutoff from Gaza, which will perpetuate the existence of two separate and disconnected Palestinian entities: Gaza for Hamas and Ramallah for Fatah.

Abbas hopes that the increased economic pressure will bring Hamas to the realization that it cannot assume responsibility for the affairs of Gaza’s 1.8 million residents, but past experience suggests otherwise. After the 2007 overthrow, Abbas and other top Fatah officials also believed that the Israeli blockade on the Strip and the accompanying economic pressure would make Hamas understand that it cannot rule and it would soon beg the Palestinian president to return. That has not happened and is unlikely to happen now.

All that’s left is to rue the fate of the Strip’s residents, who are being held hostage by their leaders.