Five Israeli doctors discuss their recent visit to Gaza, where disease is rampant, medication is disappearing and medical patients have given up hope. 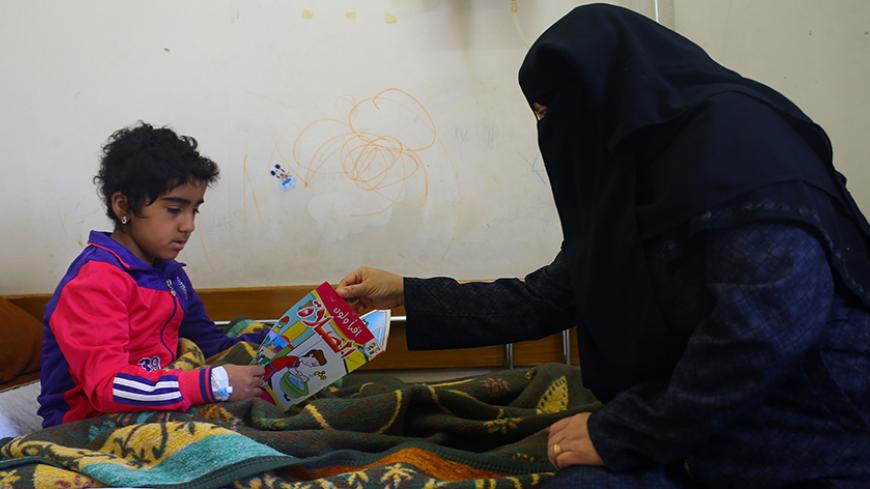 Dr. Ra'ad Haj Yehia, a member of the Physicians for Human Rights-Israel (PHRI) organization, returned June 26 from the Gaza Strip. He says he still hasn’t recovered from the scenes he saw in the hospitals there. Yehia was summoned to Gaza by medical teams in the Strip who asked the PHRI organization “to come and save lives.”

Ever since Palestinian President Mahmoud Abbas decided to sever the Palestinian Authority (PA) from the Strip and stop transferring money to it in April 2017, the health system in Gaza has been collapsing. The Gaza Health Ministry reported at the end of June on infants and children who died because the PA refused to underwrite life-saving medical treatment for them in Israel or other hospitals in the West Bank.

In an interview with Al-Monitor, Yehia says he has not been able to get back into his routine since his return from Gaza after four intensive days of treating patients. “I simply could not bear it; I’m going [home] sick. I saw innocent children who died for no reason, through no fault of their own. The situation is unbearable.” Yehia lives in Neve Shalom, a collective village near Latrun in which Jewish and Arab families live together. Yehia says that although the trip to Gaza from his house takes only 45 minutes, as soon as he stepped foot in the Strip he felt that he was in a different world.

“It is worse than harsh places I had seen in Africa. From the moment you enter [Gaza], your senses are hit with a terrible stench of sewage. Death is in the air,” he says. Yehia, who ordinarily works as a pediatrician in Israel’s Meuchedet HMO, could barely face the mothers of children and infants who begged him to take them to Israel for treatment. “They think that we can take them out,” he says, adding, “There are parents who are so desperate that they told us, ‘Better that our children die — we can’t do anything for them anymore.’”

Yehia says that when he wrote prescriptions for sick children, there were parents who told him not to bother because they have no money to buy the medications. “They don’t even have money to buy milk,” he noted.

The patients who broke his heart more than anything else were those children with cancer. “They are not being treated; they are not diagnosed. All are sick with all kinds of complications,” he says. “The depressing thing is that the parents themselves have given up; they have lost all hope to save their children. It’s terrible.”

Four additional Arab-Israeli physicians went to the Gaza Strip together with Yehia, including a surgeon, an orthopedic surgeon, a neurologist and a psychologist. They were shocked that Gaza hospitals lack even basic meds. According to Yehia, the inventory level for about 170 types of medications is at zero. All perishable medical equipment has run out completely. Since the electricity in Gaza hospitals is supplied by generators, entire hospital wards were closed in order to use the operating rooms.

Already on their first day in the Strip, the Israeli physicians began to carry out urgent surgeries. “The surgeon did five very big operations,” Yehia says. “And while he worked, he also advised and instructed local surgeons who have not been able to participate in continuing professional training sessions for more than a decade.”

PHRI CEO Ran Goldstein tells Al-Monitor that two days before the medical delegation entered Gaza, the organization succeeded in raising about 300 thousand shekels ($85,000) to acquire medical equipment and medicines. According to Goldstein, Gaza’s health system needs 4 million shekels ($1.14 million) a month to run properly — and the PA only transferred about half a million shekels to Gaza in June. It’s doubtful that even this sum or something similar will be transferred in July.

PHRI hopes to raise additional funds to acquire medical equipment and medications, but they know that it is just a drop in the bucket. The chairman of the Cystic Fibrosis Foundation in the Strip told members of the Israeli delegation that there are 321 children in Gaza who have this disease, but they have no way of getting medicine to treat them.

The Gaza residents are aware of the fact that the doctors treating them are from Israel. Yehia says that the residents appreciate them and view them as saviors. “They know that we are from Israel and they tell us, ‘If only we could leave [Gaza] with you; if only you could take us with you.’ That’s how bad the situation is,” he says.

But beyond the problem of people sick with severe and untreated illnesses is the overall issue of terrible sanitary conditions of the residents of the Strip. The members of the delegation were shocked at what they saw and the infectious diseases that have spread like wildfire, especially among the children. Yehia tells us that severe intestinal diseases are rife in the Strip due to the contaminated, brackish water coming from the faucets. The diseases cause severe diarrhea and vomiting. “You cannot help but be horrified by the terrible poverty and inhuman conditions under which the residents live,” he says.

Only recently, professor Eilon Adar of Ben-Gurion University in the Negev had told Al-Monitor that the Strip’s polluted water has large amounts of nitrates that can interfere with the blood’s supply of oxygen to the body. That is what is causing the so-called blue baby phenomenon in the Strip, when the baby’s skin turns blue due to lack of oxygen.

Meanwhile, no solution is in sight for the struggle between Hamas and the PA. A Palestinian source in Ramallah told Al-Monitor that Abbas is still determined to disengage from Gaza, and nothing will change his mind. “It is not logical that Hamas should exist on money transferred to it by the [PA]. Therefore, Abbas has decided to put an end to it,” he says.

When asked how he feels in light of the fact that infants and children in Gaza are dying because of the terrible shortage in medicine and medical equipment, the source blamed Hamas for the dismal situation in Gaza. According to him, the gloomy situation of the Palestinians in Gaza, members of his own people, “given to the brutal regime of Hamas, keeps Abbas up at night with concern. But he has come to the decision that he can no longer continue to transfer money from the [PA's] account to Hamas.”