Callousness on the part of Jerusalem, Gaza and Ramallah alike prevents Palestinians from getting life-saving treatment at Israeli hospitals, writes Akiva Eldar. 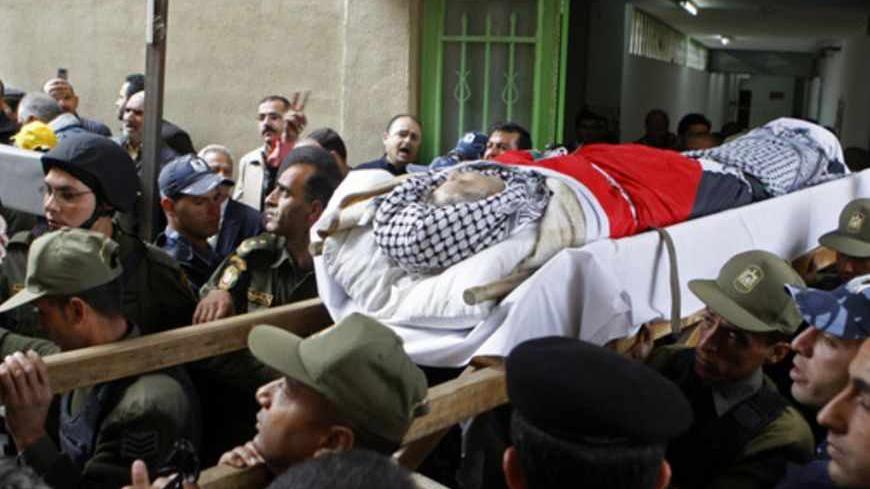 Members of the Palestinian security forces carry the body of Maysara Abu Hamdeya out of a hospital before his funeral in the West Bank city of Hebron, April 4, 2013. - REUTERS/Mussa Qawasma

The reporting on the death of Maysara Abu Hamdieh focused on concern that news of another Palestinian dying in prison would spark a wave of violent demonstrations in the territories. Few wondered why it took six months from the time Abu Hamdieh complained of sharp pain in his throat in August 2012 until he was diagnosed this past February with advanced-stage cancer. Fewer, still, wondered why he was only hospitalized at the end of March, three days before his death.

One can easily imagine the magnitude of public reaction in Israel to a report of an Israeli soldier dying in captivity, heaven forbid. We all witnessed the public campaign surrounding the President Barack Obama visit for the release of Jewish spy Jonathan Pollard, not to mention the Israeli drug dealer who was kidnapped by Hezbollah and freed, several years ago, in exchange for hundreds of Palestinian prisoners.

It’s harder, still, to decipher the system that enables a society blessed with collective concern for its sons and daughters to act, at the same time, with such callousness and hard-heartedness when it comes to similar sensitivities displayed by the Palestinians over 4,700 of their sons and daughters held by Israel as “security prisoners.”

While the issue of prisoner releases and conditions of incarceration occasionally arises — but only following a hunger strike or the marking of “Prisoner Day” in the territories — the fate of “regular” sick Palestinians, whose lives depend on special medical care, is relegated to the sidelines, if at all. Last week my colleague Mohammed Suliman described on this site the manipulative use made by Israeli defense authorities of the permits granted to sick Gaza residents and their escorts seeking treatment in Israel and East Jerusalem.

Stipulating that they or their escorts become collaborators in order to get an exit permit and even arresting those who refuse, constitutes the crudest, most outrageous end point in a series of obstacles placed by authorities in the way of the helpless. ''Physicians for Human Rights,'' an Israeli NGO, reports that the last year saw a certain improvement in the number of entry permits granted to Gazans, but even today entry is refused to some 20% of those needing treatment or to their escorts.

But Israel is not alone in its callousness. Activists of “The Road to Recovery,” an organization that drives Palestinian children to and from hospitals in Israel and East Jerusalem, recount scandalous behavior on the part of the Palestinian Authority in Ramallah and the Hamas government in Gaza toward sick people and their families who require help. Parents who are not fortunate enough to have a cousin or acquaintance in the right places, are forced to pay a bribe for each permit. Occasionally one of those families is informed that it must stop treatment for a baby with cancer in an Israeli hospital, equipped with the best medical equipment, and is directed to continue treatment at a hospital in East Jerusalem or Cairo. Why? “Because it’s cheaper there.”

The Palestinian Authority, which earmarks a quarter of its budget to pay the salaries of its security apparatus, exercises strict budgetary thrift in the supply of medication and ambulances for the sick. A former coordinator of the Authority’s permit office in Gaza complained to the Israeli transportation volunteers of the callousness of the Palestinian Health Ministry in Ramallah toward sick Gaza residents. “This situation is known to all,” one of the organization’s volunteers told Al-Monitor, “but nobody cares about it except the sick and they — the sick and their families — want to safely reach an Israeli hospital and are afraid to say a word.”

The tremendous gap between the level of Israeli medicine and that in Gaza did not come out of nowhere. To a large extent it is the result of decades of oppression and neglect of civilian infrastructure, in general, and of the health system, in particular, under Israel’s occupation regime. In April 1994, the first Palestinian minister of health, Dr. Riad Zanoun, described the condition of the system he had been handed: “When Israel captured the Gaza Strip in 1967, there were 360,000 Palestinians and five hospitals with 800 beds. Today, 800,000 people live in Gaza and we still have five hospitals with 800 beds.” During the rule of the Palestinian Authority, the number of hospital beds has risen by 30%, to 1.3 beds to every 1,000 residents. (The bed average in OECD countries stands at 3.6 beds to every 1,000 people, while in Israel it is 2 beds for every 1,000).

Since then, the population of Gaza has almost doubled, but the relative condition of the health services has worsened further. A ''Physicians for Human Rights'' (PHR) delegation that visited the Gaza Strip in mid-March described a shortage of experts, advanced equipment and medicines. At the end of a long day of intensive activity, which included several operations, the doctors reported that the prolonged blockade of the Strip had caused a shortage in sub-specializations and an urgent need of programs to update doctors in various areas of medicine. An examination of hundreds of patients revealed problems with diagnoses and appropriate treatment. Many patients don’t get adequate medical consultation and are not directed to a further investigation of their condition. On top of that, patients are not given up-to-date drugs and are often forced to make do with ones that have expired. Due to financial difficulties and a lack of knowledge about alternatives, doctors continue to stuff patients with drugs that don’t contribute to their recovery.

Sadly, the practice of providing patients with drugs that don’t improve their condition is typical of the leaders of both injured parties — they also keep prescribing medications past their due dates. As always, the sick, the helpless, the incarcerated, the unconnected, are the first to suffer. Luckily, several hundred righteous people in Israel have been touched by the affliction of their neighbor and are not put off by the authorities’ hard-heartedness. Thus, in the past year, volunteers of “The Road to Recovery” carried out at least 2,000 runs of Palestinian children to Israeli hospitals and back to the roadblocks. Just this past Saturday [April 6], a group of PHR doctors visited the Jenin refugee camp and treated more than 320 residents.

Apart from the important practical contribution, the encounter of sick Palestinians and their families with Israeli volunteers provides a side benefit: building relationships of trust between the people of two nations supposedly divided by an iron curtain. The leaders and senior officials in Jerusalem, Ramallah and Gaza would do well to learn from their anonymous citizens how to treat human life with dignity and freedom. Until then, the detention of thousands of Palestinian “security prisoners” in Israeli jails along with the medical neglect of Palestinian patients is tantamount to holding a burning match to a keg of gunpowder.