Israeli physicians say that many cancer patients from the Gaza Strip are banned from entering Israel, and so they are hospitalized in Gaza where there is no adequate medical treatment. 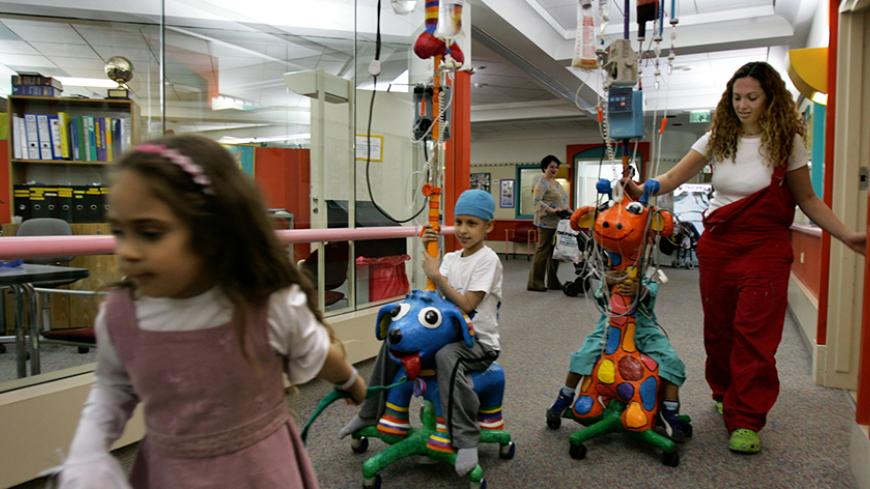 Physicians for Human Rights (PHR) claims Israel has “dramatically toughened” its policy on granting permits to sick Palestinians needing life-saving treatment in Israeli hospitals, among them many cancer patients. This, despite the fact that the Palestinian Authority (PA) pays in full for every patient referred by its Health Ministry for care in Israel.

Attorney Mahmoud Abu Arisha, in charge of the organization’s occupied territories department, told Al-Monitor that over the past six months PHR has received 158 appeals from severely ill Palestinians in the Gaza Strip and West Bank whose requests for treatment in Israel were turned down by the Shin Bet security agency. Naturally, not all people turn to PHR when their requests for entry permits are denied. Thus, the organization estimates that the number of requests refused by the Shin Bet is much higher than that. In 2015, in comparison, the organization received 48 such appeals over the entire year, and only 23 the year before.

Over the past few years, he said, Palestinians have submitted annually about 1,300 requests for entry permits to Israel to benefit from life-saving treatments in Israeli hospitals. According to PHR’s data, during these past years, more than 10% of the requests were turned down on grounds of being a security threat. But in the past few months, the organization has detected a surge in the number of rejections. Absent a medical alternative in the West Bank, and even more so in the Gaza Strip, denying Palestinians medical treatment in an Israeli hospital is effectively a death sentence.

Nonetheless, it should be noted that more than 1,000 severely ill Palestinians reach Israel every year and doctors fight to save their lives, very often successfully so.

“We want to know what it means when someone is denied a permit on the grounds of being a security threat. Often we come across patients who were allowed to enter Israel for treatment one week, but were denied the next week. We sense that this argument is being misused, because if any of the patient’s family members are involved in activity that threatens Israeli’s security, the entire family is automatically turned down by the Shin Bet,” Abu Arisha said. He also noted that the organization has documented cases of Palestinian patients who died while awaiting the treatment denied to them by Israel.

Abu Arisha said that last year, the organization’s repeated appeals to Israeli authorities yielded entry permits to 60% of the cases that were referred to them. And if this is the case, why were these people — considered beforehand a security threat —suddenly cleared for entry? Why were they suddenly turned into people who are no longer a security threat?

Attallah al-Abit, 31, is hospitalized in critical condition at the Rentisi Cancer Hospital in Gaza. All his requests for permission to travel to Israel for treatment have been denied. His father, Ziad, told Al-Monitor his son was injured in Operation Protective Edge in the summer of 2014 by a missile that hit a group of pedestrians in Gaza City on their way to seek shelter from the fighting between Hamas and Israel at one of the hospitals run by the United Nations Relief and Works Agency for Palestine Refugees in the Near East. Two of his cousins, ages 12 and 14, were killed; he was gravely injured. Abit was taken to Israel’s Hadassah Hospital in Jerusalem, where he was treated for three months.

“They told him to go home for a while until his body grows stronger before undergoing another operation. He returned home and then his condition deteriorated and it turned out his liver has been damaged and contained cancerous cells. Since then all his requests for an exit permit [from Gaza to Israel] have been denied,” his father said. He has submitted 12 requests to transfer his son from the hospital in Gaza to Israel, but all have been rejected. Meanwhile, his son is in a medically induced coma.

Even an appeal by the director of the department at Hadassah where his son had been treated, Dr. Haleile, did not sway the Israeli authorities into letting his son be moved to Hadassah to try to save his life, the father said. Abit added that at the liaison office in Gaza that passes on the Palestinian permit requests to Israel’s military authorities, he came across dozens of Palestinians begging for their relatives’ lives.

At the Rentisi Hospital in Gaza he meets even more families in the same situation. “People are dying. Even children. I’m talking about dozens of patients who can't be saved in Gaza. At the Rentisi Hospital all they do is put patients on life support and give them pain killers. Anyone who comes to the hospital cannot remain indifferent to the scenes there. People are crying. These are unbearable sights because death is in the air and there’s no answer to the prayers.”

Abu Arisha told Al-Monitor no treatment is available for cancer patients in Gaza, whereas in the West Bank the treatment is limited. “In Gaza, chemotherapy treatments are not available due to an ongoing absence of chemicals, and there is no radiation therapy at all. In the West Bank, given the financial straits of the PA, often there is no way to supply all the needed substances,” he said. He explained that the situation in the West Bank is slightly better compared to Gaza, because patients are allowed to travel to the Augusta Victoria Church Hospital in East Jerusalem for chemotherapy treatments.

The mother of a 7-year-old boy from Shaati refugee camp in Gaza also wants to save her son’s life. He was treated in the past at the Schneider Children’s Medical Center in the Israeli town of Petah Tikva. She told Al-Monitor on condition of anonymity, “Three years ago they found he had a tumor. At first they prevented me from going with him [to Israel] and his father accompanied him. After his condition deteriorated, the hospital in Israel asked that I come and sit with him, and I was authorized to exit [Gaza]. I came for a while and then had to go back to Gaza. His father stayed with him. After the boy underwent a series of treatments, he was sent together with his father back to Gaza for a recuperation holiday. While they were coming back, I suddenly received a phone call from the Erez checkpoint [between Israel and Gaza]. I was told to come and get the boy because his father had been arrested. He was then sentenced to two years in prison.”

According to the mother, since then the boy’s condition has continued to deteriorate. All requests for him to be moved back to Israel for continued treatment have been denied.

“What has the boy done?” she asked. “Why do they need to abuse him? He is only 7. Now I have put in another request and they tell me it is being examined. Until when? Until, God forbid, the boy dies? When he was hospitalized in Israel, the doctors had already managed to control the disease and stabilize him. Now his health is again at risk.”

The mother also described the liaison office in Gaza full of Palestinian families pleading on behalf of their sons and daughters to be moved to Israel for life-saving care, saying, “For all of them, the refusal of an entry permit means the end; there is no chance of saving them. And that hurts.”