Israeli expert and professor Eilon Adar warns that the electricity crisis in Gaza could provoke an ecological disaster both in the Strip and in Israel. 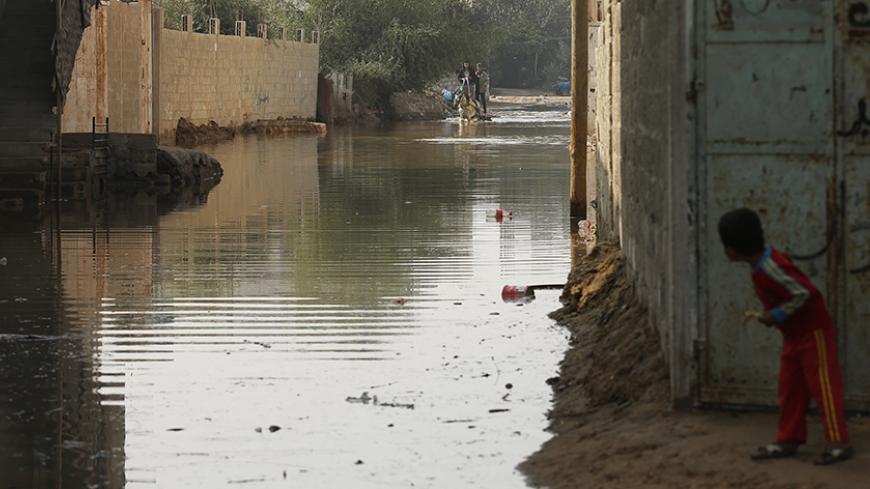 A boy looks at Palestinians as they ride a horse cart on a street flooded with sewage water from a sewage treatment facility in Gaza City, Gaza, Nov. 14, 2013. - REUTERS/Mohammed Salem

Defense Minister Avigdor Liberman keeps insisting that Israel will not supply Gaza with free electricity. He reiterated this in a June 15 interview with the Al-Munaseq website of the Coordinator of Government Activities in the Territories (COGAT), established 10 months ago to provide a direct line in Arabic to the Palestinians, above the heads of their leadership. Liberman explained that Hamas collects 100 million Israeli shekels ($28.3 million) in annual taxes from residents of the Gaza Strip but uses them to fund terror activities rather than the enclave’s education and health systems and its crumbling water infrastructure.

But Liberman’s position has generated criticism within the Israel Defense Forces (IDF), with senior officers telling Al-Monitor that the Defense Cabinet’s decision to scale back power supply to Gaza (with Liberman one of its main instigators) could result in a military conflagration with Hamas.

The crisis over power to the Strip does not only constitute a security threat to Israel but also an environmental and health hazard.

Absent energy sources, all of Gaza’s waste treatment systems collapsed about a year ago. Indeed, the system collapsed well before Israel started implementing its decision to cut back Gaza's power supply. This Israeli May 2017 decision was designed to exert pressure on Hamas following Palestinian President Mahmoud Abbas’ decision about a month earlier to disconnect from the Gaza Strip and stop paying for its electricity supplied by Israel. In fact, Gaza authorities had at the time stopped treating the sewage of all the Strip’s main towns — Gaza, Khan Yunis and Rafah. Operating the waste treatment plants requires quite a large amount of energy, and Hamas opted to use what electricity it could get for purposes it considered more important.

Professor Eilon Adar of Ben-Gurion University tells Al-Monitor that when pumping stations are shut down, oxygen cannot be introduced into the sewage to treat it by aeration (saturating it with oxygen). As a result, raw waste flows and seeps into groundwater and Gaza rivers. The rest of the water in massive amounts flows through pipes from the pumping stations directly into the Mediterranean Sea, and now Gaza’s entire coast is severely polluted.

Al-Monitor has learned that a team of experts recently submitted a paper to the military authorities tasked with civilian affairs in the territories, which was also brought to the attention of Maj. Gen. Yoav Mordechai with COGAT. The paper warns of the consequences of continued raw sewage flowing into the waters of the Mediterranean, which could result in irreparable damage to the groundwater in the Strip and also affect Israel.

There is also concern that channeling waste into the riverbeds in the Strip will lead to an outbreak of infectious disease, especially among babies and children. Adar explains that the polluted Gaza water contains large amounts of nitrates, which can interfere with the blood’s supply of oxygen to the body. “That’s why there’s now a new phenomenon in the Strip of so-called ‘blue babies’ who have ingested nitrate from the polluted water and whose skin turns blue due to lack of oxygen,” he says.

“There’s a significant threat to Israel in all aspects, and fixing the damage will cost more than a decade’s worth of electricity supply,” says an Israeli defense source — speaking on condition of anonymity — who was privy to the experts’ brief. Israel is in a serious bind, he says, because all Israeli authorities concerned realize that it should not continue funding Gaza’s power consumption, certainly not when Hamas is using its resources for a weapons buildup. But no one in the Defense Cabinet or in any other relevant forum has considered what reducing the power supply would do to Israel, he adds. “We can clearly see that the power crisis will result in an outbreak of disease and environmental damage that will affect Israel directly in the immediate and long term,” says the source.

Adar says he does not know exactly how much raw sewage is flowing into the sea, but he estimates that it amounts to hundreds of thousands of cubic meters a day. “The main problem with letting sewage flow into the sea is in creating an ecological change of all the marine fauna,” he says. “A huge amount of seaweed suddenly takes on new biomass that creates mutations.” These mutant algae, in turn, have a negative effect on the water pumped into the desalination plant in the Israeli town of Ashkelon a few kilometers to the north of the Gaza Strip (distillation becomes more complicated because the water needs to be filtrated again).

There’s no telling how long the Gaza power crisis will last. For now, there’s no solution in sight — and the only power station in the Strip that provided 12% of its power needs is completely crippled. Israel, as mentioned, has decided to reduce the amount of electricity it supplies to the coastal enclave.

The expert opinion includes an extensive assessment regarding the danger of epidemics in Gaza as a result of infectious disease. It notes that Gaza hospitals, which in any case are only partially operational due to the power shortage, are unable to treat infectious diseases even now. Will infectious diseases appear in Israel too because of the raw Gaza sewage flowing into the sea? Experts are divided on this. In the short term, there does not appear to be much danger of such an effect, but no one knows how long the crisis will last and when a reasonable solution will be found.

Adar warns that one of the irreversible environmental consequences of the current situation is the excessive use of cesspits that pollute the ground water. Israel’s military authorities are aware of this issue and of the concern that the ongoing shutdown of the sewage treatment plants will lead Gaza residents to use cesspools.

Adar notes that even now Gaza does not have any potable water. Sewage and excessive pumping by the Palestinians have polluted the ground water. Given that the aquifer level has changed and salt water has intruded into the ground water, the water in Gaza is not only polluted, it is overly saline. Adar sums up thus, “I say this as clearly as possible: It is both morally incorrect and politically not logical to have your neighbor thirsty. It could come back to haunt us.”