For Israel, the silence of Palestinian President Mahmoud Abbas following the attack on an Israeli border police officer is part of an attempt to appease hard-liners within Fatah. 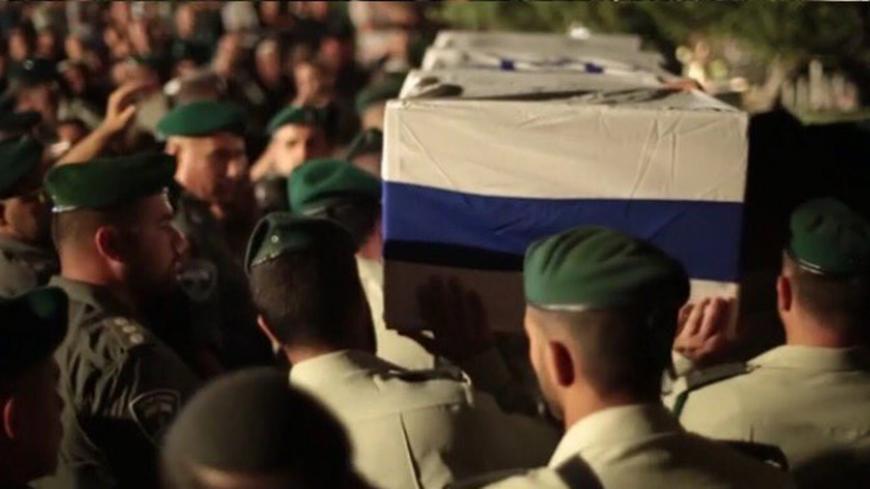 The coffin of Hadas Malka, a 23-year-old female Israeli border police officer who was stabbed to death while on duty, is carried at her funeral in Ashdod, Israel, June 18, 2017. - Twitter/@MickyRosenfeld

“When we see that the Palestinian Authority [PA] not only does not denounce the terror attack, but the Fatah movement of [Palestinian President Mahmoud] Abbas is a partner in backing the terrorists, I think it’s clear we have no one to talk to and nothing to talk about. I hope it’s now clearer than it was in the past,” said Public Security Minister Gilad Erdan. He spoke during a condolence visit to the family of border police soldier Hadas Malka, who was murdered on June 16 in a terror attack in Jerusalem.

Three organizations competed in taking credit for the attack, among them — for the first time — the Islamic State (IS), who dubbed the terrorists “soldiers of the Islamic State.” But a military source told Walla news that the attack was carried out by a local cell in a pattern similar to the terror attack wave of the so-called “individual intifada” that broke out in October 2015.

The reactions of the three organizations — Hamas, the Popular Front for the Liberation of Palestine (PFLP) and IS — are very interesting, but more interesting is the behavior of the Fatah movement. Fatah activists hung the movement’s flags on the roof of the home of one of the perpetrators, Osama Ahmad Mustafa Atta, a resident of the village of Deir Abu Mash'al near the West Bank city of Ramallah. An announcement posted by the movement on its Facebook page condemned the PFLP for what it claimed was an attempt to steal one of its sons and activists, whom it dubbed “a hero.”

“He should be credited with the glory of the movement,” according to the announcement. In other messages spread by Fatah activists, they claimed that “occupation forces” had executed the three assailants for no reason.

In response, Coordinator of Government Activities in the Territories Maj. Gen. Yoav Mordechai issued a harsh statement of condemnation on his Arabic-language Al-Munaseq website: “The three cruel people who undertook this cowardly terror attack received praise from Fatah, which falsely claimed they were innocent. This is incitement to terror. In response to this heinous crime and the incitement by Fatah officials to win popularity, Israel has decided to take action. The first is revoking 250,000 entry permits [for Palestinians visiting family in Israel] and revoking work permits from the kin of the terrorists.”

Israel’s defense establishment has been following Fatah’s change in tone for months, especially since the Fatah convention in November 2016. In the wake of that meeting, Mahmoud Al-Aloul was named as Abbas’ deputy in February 2017 — a move that essentially sparked a war of succession within the movement.

A determined effort has been waged for a while now across the West Bank in a bid to convince young people to join the various Palestinian movements, among them Fatah. This follows years during which the young abandoned Fatah, viewing its activists as members of a corrupt older generation looking out only for themselves. It seems that getting them to join Fatah now entails growing radicalization by the movement. Fatah believes this is the way to win popular appeal and to avoid being left behind in the competition among the various movements in the West Bank for the hearts of the young.

This is why confronting Israel and carrying out actions depicted as a struggle to end the occupation are welcomed by Fatah militants. Thus, for example, during the hunger strike by Palestinian prisoners in Israeli jails — instigated in April by the contender to Abbas’ throne, Marwan Barghouti — Fatah for the first time since the end of the second intifada in 2005 called on young Palestinians to clash with Israeli troops at West Bank roadblocks in what was called a “day of rage.” Paradoxically, PA police were instructed by Abu Mazen, who also heads up the Fatah movement, to ensure that the Fatah rank and file did not heed the call to violence.

The same thing is happening now: Fatah against Abbas. Although the Fatah movement did not assume responsibility for the Jerusalem terror attack, its activists have not missed a single opportunity to cheer the perpetrators on social media, news broadcasts and in formal announcements, and to note that one of the three — Atta — was its own flesh and blood and deserving of glory.

During the so-called individual intifada, Abbas asked Fatah activists to act with restraint and teach young Palestinians in schools that terror attacks were opposed to Palestinian interests, and the chairman and senior PA officials were extremely worried about the lives of the young people who could be killed or injured in such attacks. The activists were also urged to convey the message that the Palestinians must give the diplomatic process a chance to eventually result in the establishment of the Palestinian state.

Israel interpreted these moves as attempts — among other things — to preserve Abbas’ rule, which would be undermined if another bloody intifada were to erupt in the territories and deteriorate into chaos in PA territory. Now that trend has reversed itself.

An Israeli security source speaking to Al-Monitor on condition of anonymity said Fatah’s expression of support for the Jerusalem attack is just as severe as accepting responsibility for it. “This time we are seeing encouragement, support and glorification. The message being conveyed by the Fatah activists to the rank and file is that every terror attack against Israel, even if not directed by the organization, not only is not wrong but is welcome,” he argued.

Abbas, who is working through diplomatic channels to promote talks with Israel through US mediation, did not condemn the attack and did not silence the militant voices within his movement. Although Abbas proved at the Fatah convention that he still holds the reins, it seems he only exercises this control in moves designed to deter his opponents. He avoids confrontation with those leading the militant line, especially because he needs their support in the Fatah institutions to stay in power.

His silence now in the face of the independent militant line is actually opposed to the diplomatic moves he aspires to advance and, perhaps, even to his philosophy. Yet Abbas is hostage to the political forces surrounding him. More so, he must cope with prevailing sentiments within the Palestinian street, by which he is conducting a policy that is too submissive and too lenient vis-a-vis Israel. And so, Abbas’ silence constitutes in fact surrender to the new Fatah forces. “If Abbas thinks that his silence vis-a-vis the forces within his movement will help him maintain his position and power, he will find out he was wrong, big time,” said the defense source. “His silence is being interpreted as weakness, and he will pay a price for it.” Still, it is important to remember that breaking the silence vis-a-vis Fatah militants might actually cost Abbas an even higher price.