Following the tension between Qatar and Saudi Arabia, the relationship between Iraq and Qatar has become strong and many Iraqi politicians support Qatar against Saudi Arabia. 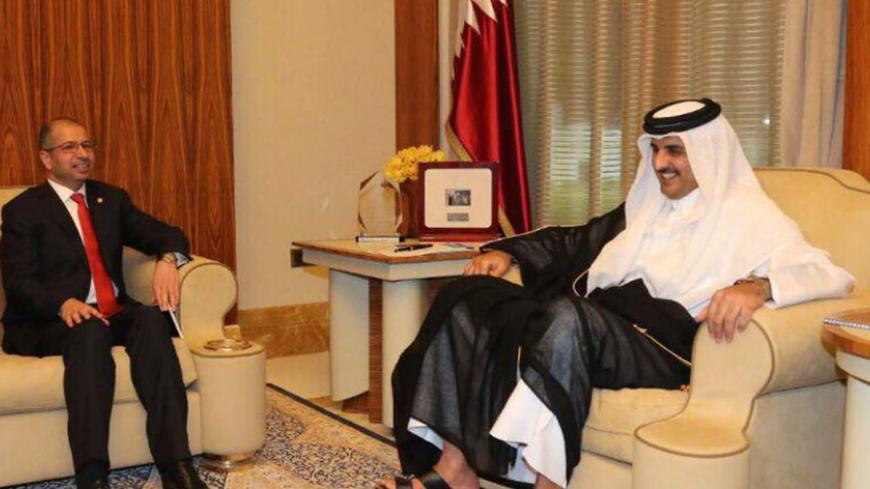 Iraqi parliament Speaker Salim al-Jabouri meets with the emir of Qatar in Doha, Qatar, in this photo posted on June 4, 2017. - Twitter/@MethaqAlFayyadh

Although the official Iraqi position indicates that Iraq has been neutral vis-a-vis the escalating crisis between Saudi Arabia and Qatar, the recent rapprochement between Iraq and Qatar as well as the sympathetic attitudes of Iraqi politicians with Qatar tell a different story.

Iraqi Prime Minister Haider al-Abadi said June 6, commenting on the Gulf crisis, “Iraq is not taking any side. We are maintaining good relations with all countries.”

Meanwhile, Iraqi parliament Speaker Salim al-Jabouri made an official visit to Doha on June 4 to discuss ways for bilateral cooperation between Iraq and Qatar and investment opportunities for cooperation at various levels.

The Financial Times reported that Qatar has been providing substantial financial support to Iraqi Shiite military organizations recently, showing that there is a clear Iraqi-Qatari rapprochement.

The foreign minister of Qatar, Sheikh Mohammed bin Abdulrahman Al Thani, made an unprecedented visit to Iraq at the end of May, where he met with Abadi and said Qatar will open an embassy in Baghdad in the near future.

The timing of Thani's visit, when the crisis was escalating rapidly between Saudi Arabia and Qatar, conveyed a clear message to Saudi Arabia that Iraq is not only taking a stance with Qatar against it, but it is very likely to take advantage of this crisis for regional political interest associated with Iran's axis against that of Saudi Arabia.

Hoshyar Zebari, who served as foreign minister and finance minister, criticized Jabouri’s visit to Qatar. “The timing of the visit was bad,” he said. “The visit had clear goals. What was Jabouri doing in Doha? Is it to mediate to ease the Gulf crisis? Or to make contacts with Iraqis for reconciliation purposes? Did he ask for financial support for him and for his party in the upcoming elections?”

Jabouri, a Sunni Muslim, belongs to the Iraqi Islamic Party, which espouses an Islamic ideology associated with the Muslim Brotherhood, which in turn enjoys considerable support from Qatar. This support is the main bone of contention between Saudi Arabia and its allies the United Arab Emirates and Egypt with Qatar.

Controversial Sunni parliament member Mishaan al-Jubouri went beyond offering Qatar political support, as he announced his willingness to send 10,000 Iraqi fighters among his followers to defend Qatar and stand in the face of “the danger of Saudi Arabia and its Gulf allies.”

He said, “We will not allow Saudi Arabia and its allies to score a win against Qatar or turn its regime to one that is loyalist to them."

Jubouri also considered Saudi Arabia to be the region’s center of evil, saying, “Iraq will not know stability until Saudi Arabia is disintegrated as it is the center of evil." He noted that if Saudi Arabia succeeds in strong-arming Qatar, its threat to Iraq will be greater and therefore it is in Iraq’s best interest to support Qatar.

Supporting Qatar is not limited to Sunni groups in Iraq but to Shiites as well, who until recently were accusing Doha of supporting terrorist groups. They appear to change their views, calling for the need to embrace and show solidarity with the Qataris in the face of the Saudi threats. The State of Law Coalition, led by former Prime Minister Nouri al-Maliki, called upon the Iraqi government in a June 7 statement to stand with Qatar to deter any military aggression against it by the Saudi axis.

Mohammed al-Sahyoud, a parliament member and a leader in the State of Law Coalition, said June 5, “Qatar feels its previous policy supporting terrorism is wrong and is now trying to change it. Qatar ought to be welcomed and embraced by the other axis, including Russia, Iran, Syria and Iraq.”

The sudden change of positions is not something new in Iraq. During Maliki's rule, Iraq issued an official complaint against the Syrian regime before the United Nations, accusing it of harboring Baathists who fled Iraq and of being involved in recruiting suicide bombers. Iraq reneged on its position after the outbreak of the Syrian revolution in 2011. Maliki and his affiliated parties and groups became the biggest supporters of Syrian President Bashar al-Assad against his opponents.

In contrast to the calls of supporting Qatar, another camp in Iraq is calling for the role of mediator between the two sides without any bias, as this could place Iraq in a critical position, at a time the country is suffering from security, economic and political crises.

The Shiite National Alliance announced that its leader Ammar al-Hakim intends to visit three Gulf countries including Qatar to mediate to end the conflict.

Adel Abdul Mahdi, a leader of Hakim's Islamic Supreme Council, also called for a unilateral stance in the current crisis. "Iraq must play a unifying role, finding a common ground with all Iraqi components," he said.

Al-Monitor learned from a source in the National Alliance’s supreme political committee that Baghdad has submitted a proposal to hold a meeting between the conflicting parties in the capital in an attempt to reach a peaceful solution that would be satisfactory to all parties.

The head of Iran's Expediency Council Mohsen Rezaei also proposed a meeting in Baghdad upon the official invitation of the Islamic conference to discuss the crisis in Qatar with the Gulf states.

It does not seem that Iraq has a unified strategic policy toward the current crisis in order to invest it to enhance its national interests.