With Qatar isolated by GCC, Iran steps in

After Saudi Arabia asked Qatar to cut relations with Iran, Iranian and Qatari leaders said they plan to expand ties. 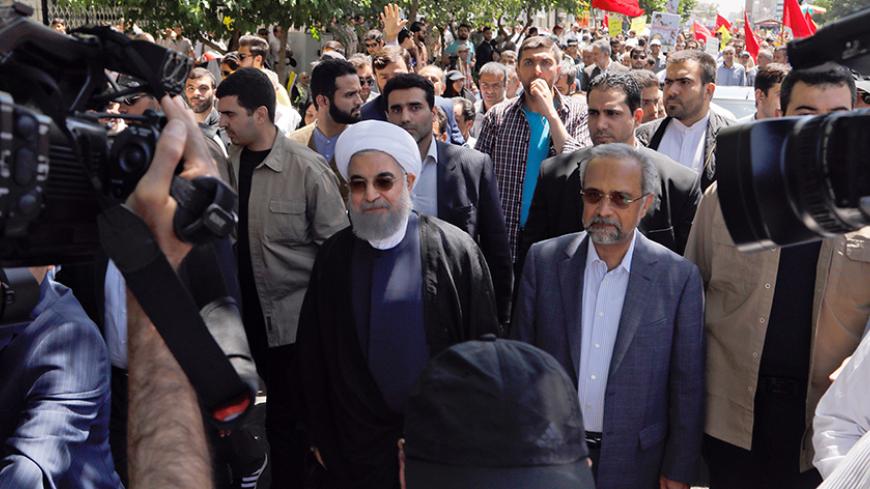 Iranian President Hassan Rouhani spoke with the emir of Qatar, Sheikh Tamim bin Hamad Al Thani, and stressed the expansion of their ties amid a Saudi-led effort to politically and economically isolate the tiny country in the Persian Gulf.

During the phone call on June 25, Rouhani said, “Helping Qatar’s economy and expanding relations — especially in the private sector between the two countries — can be a joint goal.” Iran has been reportedly sending 1,100 tons of fruits and vegetables to Qatar daily ever since Saudi Arabia blocked off its borders to the country, according to Iran’s directors of ports in Bushehr province. Qatar’s only land border is with Saudi Arabia.

Rouhani noted that he sees a “continuous relationship” between Iran and Qatar and that there is “a great deal of capacity to strengthen ties.”

On the crisis between Qatar and Saudi Arabia, which has dragged in regional states as well as Western countries, Rouhani said, “We believe if a dispute takes place between regional countries, pressure, threats and sanctions is not the path to resolve the dispute.” He added that Iran is ready to help to reduce tensions.

However, one of the 13 demands that the team of Saudi Arabia, the United Arab Emirates and Bahrain presented to Qatar is that they cut all relations with Iran. Other demands included they shutter Al Jazeera news network, suspend cooperation with those groups designated as terrorists and pay Saudi Arabia reparations.

Rouhani also said the blockade on Qatar “is unacceptable for our country. Our airspace, seas and land will be open to Qatar as a brotherly and neighborly country.”

Based on the phone conversation between the Iranian and Qatari leadership just days after the Saudi list of demands was published shows that Qatar so far is refusing to cut ties with Tehran. The Saudi demand that Qatar stop plans to build a Turkish military base in the country has irked Turkish President Recep Tayyip Erdogan, who said the demands were “against international law.” Erdogan continued that to ask “Turkey to pull out its troops from Qatar is disrespectful behavior toward us.”

Ankara’s reaction has caught the attention of Iran’s media. Erdogan’s comments in support of Qatar made headlines on a number of Iranian websites. Comments by Turkish Foreign Minister Mevlut Cavusoglu that the “imposed blockade on Qatar is a humanitarian mistake” also made headlines.

Some Iranian websites even had fun with the new trade relations between Qatar and Iran. Mashregh News published the tweet from a popular Qatari account that showed a picture of an Iranian yogurt drink with the caption, “Iranian Safavid yogurt is delicious” — a joke in reference to sectarian slurs that refer to Iranians as Safavids, the 16th-century Iranian dynasty that expanded Shiism.