Head-spinning developments in the region have lead to interesting realignments as a cautious President Recep Tayyip Erdogan works to deploy Turkish forces in Qatar and meets with Iranian Foreign Minister Mohammad Javad Zarif in Ankara. 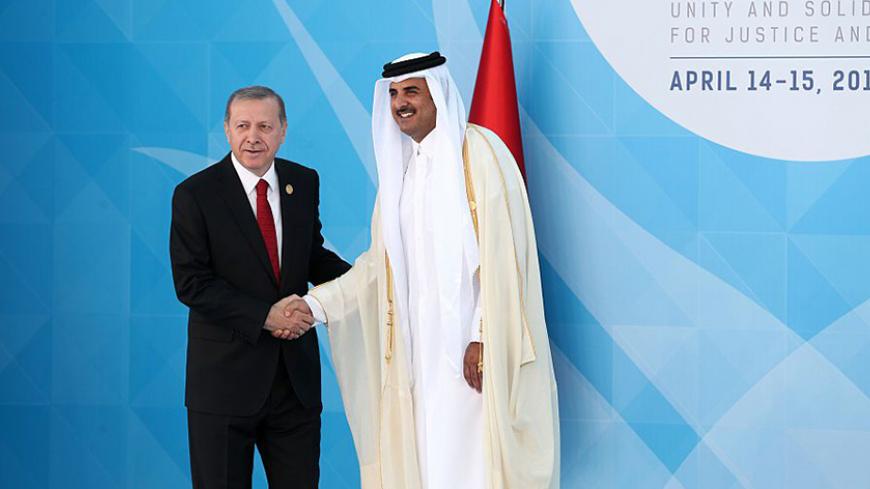 Turkish President Recep Tayyip Erdogan broke his silence over the crisis engulfing his country’s closest Arab ally Qatar today, condemning the actions of the group of Gulf countries that cut off ties with the emirate over its alleged support for extremist groups and Iran. In a related move, Erdogan’s ruling Justice and Development Party (AKP) has decided to fast-track bills to deploy Turkish forces in Qatar and train Qatari troops in its legislative agenda. Turkey is building a base in Qatar that will eventually host up to 10,000 troops under an accord in which Turkey pledged to defend the Gulf state.

Erdogan was, however, uncharacteristically mild in his rebukes. “I’d like to say that we don’t find sanctions against Qatar right,” he said at a gathering in Ankara. He added, “The most appropriate way for the Gulf Cooperation Council countries to solve their internal problems is through dialogue. In this respect, we admire Qatar’s constructive and level-headed approach.”

Erdogan also renewed an earlier offer by Foreign Minister Mevlut Cavusoglu to mediate between Qatar and the group of countries led by Saudi Arabia and the United Arab Emirates that are squeezing its independent-minded leader, Sheikh Tamim bin Hamad Al Thani. “We are ready to do everything to resolve other countries’ problems with Qatar," he said.

His comments came before a surprise meeting with Iranian Foreign Minister Mohammad Javad Zarif in Ankara. Iran's envoy is believed to have requested the meeting to discuss the dispute. Speaking to reporters in Ankara amid news of today’s terrorist attack in Tehran, for which responsibility has been claimed by the Islamic State, Zarif underlined the need for greater cooperation between Turkey and Iran.

The head-spinning developments in the region have made for interesting realignments. Until recently, Erdogan was lambasting Iran over its alleged Persian nationalist and Shiite sectarian policies in Iraq and Syria, where Turkey and Iran are backing rival blocs.

But US President Donald Trump’s courtship of Saudi Arabia followed by his recent tweets suggesting that he backs the actions against Qatar have set off alarm bells in Ankara.

Erdogan had invested high hopes in Trump, but his meeting with the American president last month yielded little. Overriding Turkish howls of protest, the United States is arming the Syrian Kurds and is unlikely to extradite Fethullah Gulen, the Turkish preacher whose disciples in the armed forces are accused of taking part in the failed July coup in large numbers. Nor will it hand over Reza Zarrab, the Iranian-Turkish gold trader with close ties to key members of Erdogan’s AKP who is accused of busting US trade sanctions on Iran. On June 6, the US House of Representative unanimously approved a resolution calling for members of Erdogan’s security detail who were involved in the violent suppression of pro-Kurdish protesters outside the Turkish ambassador’s residence last month to be brought to justice.

Erdogan and his inner circle apparently believe that there is a broader US-orchestrated conspiracy to squeeze him together with Qatar and Iran. The conspiratorial mindset was palpable in Erdogan’s comments at an iftar gathering of foreign ambassadors in Ankara: “There is a game being staged behind the Qatar crisis, but we have failed to decipher it thus far.”

Tellingly, Erdogan also mentioned Andrei Karlov, the Russian ambassador to Ankara who was assassinated by a rogue Turkish police officer in December. “He was a regular at our table. We remember a good man and a real friend of our country.”

Turkey has made a big show of drawing closer to Russia in recent months, partly in reaction to continued US support for the Syrian Kurdish group known as the People’s Protection Units, which is closely tied to a militia that is waging a bloody campaign for Kurdish self-rule in Turkey.

Russia is clearly delighted by the growing rift between Turkey and its NATO allies. Germany announced today that it is withdrawing its troops from the Incirlik Air Base in southern Turkey after the Turkish government denied a request from German lawmakers to visit German troops deployed at the base as part of the US-led anti-IS coalition.

Relations between the two countries have soured in recent months, in particular over Germany’s refusal to extradite Turkish officers who allegedly took part in the failed putsch and a declaration by the German parliament that labeled the mass extermination in 1915 of more than a million ethnic Armenians by Ottoman forces a genocide.

All Turkish Prime Minister Binali Yildirim had to say about the German withdrawal was, “They can do whatever they like.”