Hamas hedging its bets in region

Hamas appears to have adopted a new regional policy of avoiding taking sides and nurturing good relations with anyone willing to accept the group. 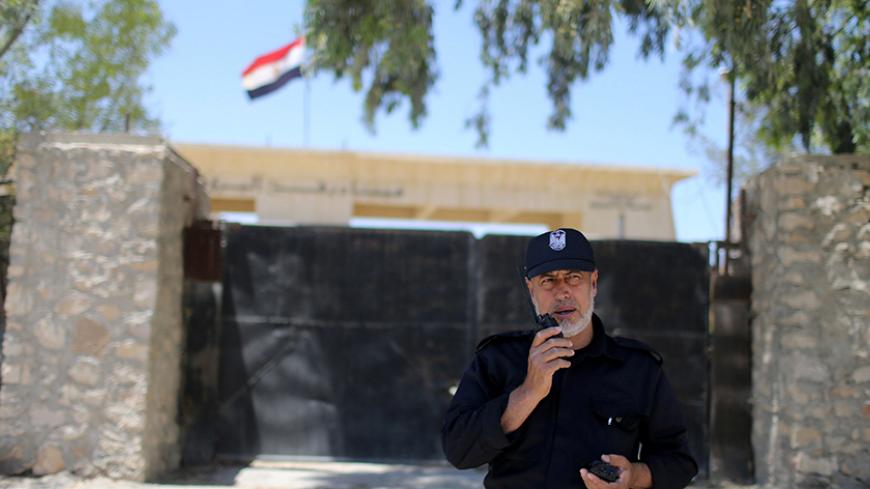 A member of the Palestinian security forces loyal to Hamas speaks on a walkie-talkie at the Rafah border crossing between Egypt and southern Gaza Strip, May 19, 2016. - REUTERS/Ibraheem Abu Mustafa

Senior Hamas official Mousa Abu Marzouk met in mid-June in Beirut with Hezbollah Secretary-General Hassan Nasrallah. Abu Marzouk arrived in Beirut following the expulsion from Qatar of several other top Hamas officials, most of whom had settled in the Gulf state after being freed from Israeli jails in the 2011 prisoner exchange for the Israeli soldier Gilad Shalit. Qatar had recently ordered them to leave, under pressure from Sunni Muslim states that regard the emirate as supporting terror.

Before traveling to Lebanon, Abu Marzouk met in Cairo with Egyptian intelligence chief Khaled Fawzy. In a certain sense, there seems to be a contradiction in these talks: How can senior Hamas officials, who have been assiduously courting Egypt in a bid for improved relations, be meeting with Nasrallah, a Cairo enemy and Iran ally? Moreover, is it possible that Hamas has found a way to extricate itself from the Catch-22 in which it is entangled without having to take sides?

As previously reported on several occasions in Al-Monitor, the armed wing of Hamas has been urging the movement’s political leadership to forge closer ties with Iran, hoping for armaments from Tehran in preparation for a future military confrontation with Israel. In recent months, Tehran has renewed economic assistance to Hamas, albeit on a far smaller scale than in the past. Arms from Iran have become increasingly important for the military wing given Egypt’s anti-Islamist activities in the Sinai Peninsula and along the Gaza border and its view of Hamas as a terror organization that requires monitoring. The Egyptian government is making it virtually impossible to smuggle weapons and ammunition into Gaza, unlike the days of former President Hosni Mubarak.

A senior Hamas source in Gaza told Al-Monitor on condition of anonymity that the movement’s various factions are engaged in a fierce debate about its future. The source said the disagreement is far deeper than the question of where the political bureau will establish its new headquarters now that it has been forced out of Qatar.

Abu Marzouk, founder of the movement's political bureau at the end of the 1980s, has for more than 20 years been seeking refuge and sponsorship for the department. For a time he lived in Virginia, but the United States expelled him to Amman, and from there he went to Damascus, then to Qatar, and now it appears, to Beirut, the bureau’s next destination.

The movement’s top brass could have headed to Gaza after Qatar but chose not to for two reasons. The first is the strategic decision the movement made, after Israel’s 2004 assassinations of Hamas leaders Sheikh Ahmed Yassin and Abdel Aziz Rentisi, not to have its leaders in one place to make it harder for Israel to target them. The senior Gaza source said the second reason is a growing realization among the movement’s leadership that it must not repeat the mistakes of former leader Khaled Meshaal, who put all the organization’s diplomatic eggs in one basket.

Hamas' new approach, being led by Meshaal’s successor, Ismail Haniyeh, calls for the political leadership to develop and maintain good relationships with anyone willing to accept the movement. In other words, it should avoid falling into the rift dividing the Arab world and therefore steer clear of controversy. That means no complete and exclusive relations with one side, such as with either Egypt or Iran, but measured relations that will allow Hamas to maintain its organizational independence and open channels to all sides.

Even as movement representatives were meeting with Nasrallah, Hamas was promising Cairo that the organization would adhere to all the understandings recently reached with Egyptian intelligence and the National Security Ministry. Accordingly, Hamas must work to preserve Egypt’s interests and thwart threats against it from jihadi and Salafi organizations in Gaza. Hamas also pledged not to smuggle ammunition and military equipment across the Egypt-Gaza border at Rafah. These demands were made clear to Hamas' new leader in Gaza, Yahya Sinwar, during a June 10-11 visit to Egypt.

The Egyptians told Sinwar that it would only allow tanker trucks to enter Gaza and deliver diesel fuel to restart the only power station in Gaza under these conditions and with the supervision of former senior Fatah official Mohammed Dahlan. Hamas understands, and Egypt even more so, that any deviation by the movement from these understandings will result in the closing of the Rafah border and the return of the existential threat to Hamas’ hold on power in light of the electricity crisis gripping Gaza.

The Egyptians' carrot-and-stick approach is clear to Hamas' leaders, and they will have to deal with this situation, at least for the near future. The movement has also promised Egypt that even if Hamas' leadership is based in Beirut, Cairo officials will still be able to observe the organization's activities.

It is hard to tell whether Hamas' attempt to have its cake and eat it too will last. In the coming days and weeks, the group will set up its headquarters in Beirut. Abu Marzouk will for the fifth time rehabilitate the movement’s political institutions in a new country. The big question is whether the Hamas leadership will be able to implement the strategy it has adopted to avoid falling again into the diplomatic abyss that it remembers well from Meshaal’s term or whether it will again run afoul of Egypt as the organization attempts to please its hosts in Lebanon.

The Gaza source believes the lesson has been learned, but experience shows that Hamas always ends up giving in to the desires of the country hosting its political leadership. Nonetheless, this time it is facing the Egyptian sheriff, who is threatening to plug up Hamas' only lifeline to the world through the Rafah-Gaza border.