Despite the legal issues that emerged in the prosecution of three men convicted of killing a Hamas military commander, Hamas carried out their execution in a matter of days of the trial's conclusion. 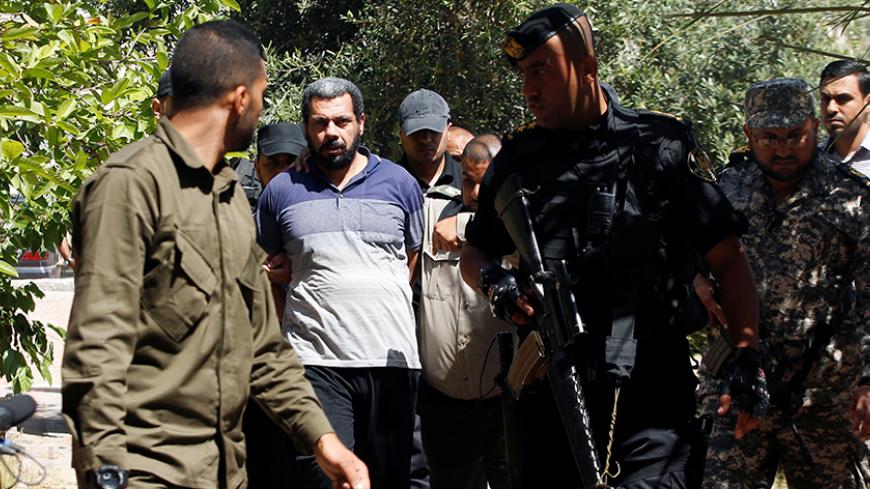 Members of Palestinian security forces loyal to Hamas escort an alleged collaborator with Israel convicted in participating in killing senior Hamas commander Mazen Faqha as he arrives at a Hamas-run military court in Gaza City, Gaza, May 21, 2017.

During a press conference to reveal the identity of Faqha’s killers May 11, Ismail Haniyeh, head of Hamas’ political bureau, said he considered the discovery of details about the assassination “a military, security and strategic accomplishment.” However, there have been issues raised surrounding the trial's speed and legal proceedings, all of which happened in the space of only 15 days.

Haniyeh said the killer confessed to committing the crime on Israeli orders. Haniyeh indicated that Hamas' penal code calls for the formation of a field military court in emergencies and times of war, both of which were applicable in this specific case. Such courts were defined in the 1979 Revolutionary Penal Code as a judicial entity with absolute powers whose verdicts are not subject to appeal.

The Palestinian Center for Human Rights criticized the death sentences, saying in a May 21 press release, “The verdict came out a week after the trial began and after only four sessions were held, a first since Hamas took over the Gaza Strip in 2007.” The center expressed fear that the accused were not granted their right to self-defense or a fair trial and wondered why there was such a rush to issue the sentence.

Bakr al-Turkmani, coordinator of the unit responsible for investigations and complaints at the Palestinian Authority-affiliated Independent Commission for Human Rights, condemned Hamas’ execution of the three men without fair trials.

Field courts are meant for times of war, when civil courts cannot convene. Turkmani expressed doubt that such a court was called for. He told Al-Monitor, “There were several legal violations during the trial. The accused appeared before the military courts even though they are civilians, which is against Palestinian law. Besides, forming the field military court to prosecute them violates the law because there was no pressing need for such a court.” Turkmani went on, "The trial should have taken place before the civil judiciary.”

Turkmani said the accused should have had the right to appear before three courts before the final verdict was issued — the Court of First Instance, the Court of Appeal and the Court of Cassation — to ensure a fair trial and appropriate punishment. He said human rights commission called May 25 for a retrial before the appropriate courts. But the authorities did not oblige.

According to a statement issued by the Hemaya Center for Human Rights on May 24, when researchers from the center visited the three men May 23, Nashar did not admit to killing Faqha, but confessed to having links to Israel since 2010. The statement quoted Nashar as saying, “The court appointed a defense attorney to represent me, but there was not enough time to sit with him and discuss the case. My trial was unfair and hasty.”

The head of the military court in Gaza, Nasser Suleiman, defended the prosecution. He told Al-Monitor, “We are in a state of war. Israel’s aircraft are always in Palestinian airspace. When any crime that affects national security is committed, it is legitimate to form a field court to examine the case.”

He added that the court followed proper procedures, saying, “The criminals confessed and the prosecution completed its investigation and prepared its list of charges to present to the court. The court gave the prosecution and the defense ample time before issuing the verdict.”

Yahya Moussa, Hamas representative and head of the Palestinian Legislative Council's Oversight Committee, accused Israel of being behind the assassination. He considers the quick apprehension of those implicated in the assassination and their swift trial and execution “a slap in Israel’s face."

He told Al-Monitor, “The Israeli enemy believes it has the upper hand in Gaza, but it is not aware that the Palestinian resistance is [so] smart and resourceful.”

He said that the quick trial proceedings and execution were the product of the Palestinian political situation under Israeli occupation. He added, “We do not live in a stable and independent country. This is a national liberation struggle requiring exceptional judicial conditions to deal with spies for Israel, firmly and without hesitation, to protect our internal front.”