There are concerns that Gaza's judiciary is being influenced by public opinion, obstructing defendants seeking to avoid a death penalty from receiving a fair trial. 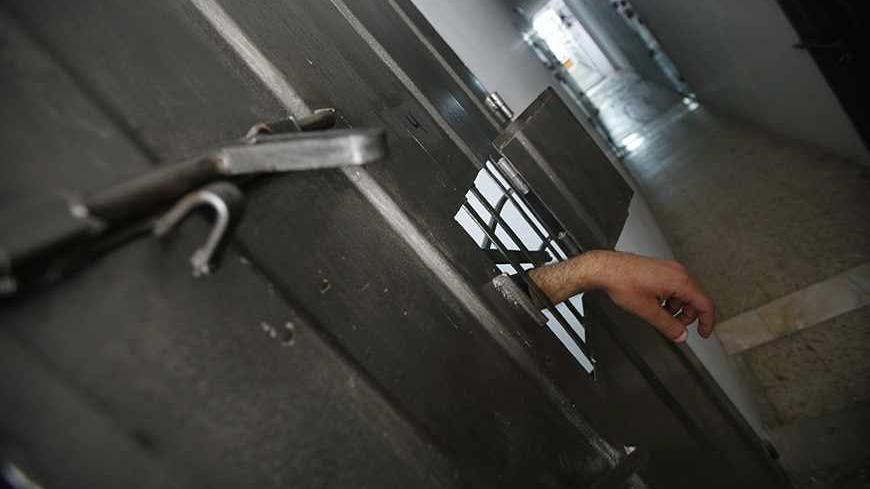 The hand of an alleged Palestinian collaborator hangs out of his cell as he speaks with a security guard inside a Hamas-run prison in Gaza City, April 23, 2013. - REUTERS/Suhaib Salem

KHAN YOUNIS, Gaza Strip — Although Palestinian society largely supports the death penalty against those who perpetrate premeditated serious crimes, there have been questions about the legality of accelerating the procedure for issuing death sentences. These sentences are sometimes issued within short periods of time, not exceeding a few months. This has raised fears that the courts have been influenced by public opinion and are not granting enough time for investigation and prosecution before issuing a sentence.

The most prominent of crimes that aroused public opinion in the Gaza Strip was the killing of young Elian Mohammed Telbani, the son of a well-known Gazan businessman who owns a cookie factory. As a result of this crime, popular pressure has been placed on the government and the judiciary, amid calls for speedy punishment of the perpetrators.

Telbani, 26, of Deir al-Balah in the central Gaza Strip, was killed on July 13, when five armed men robbed his father's factory. His father was wounded during the robbery.

In a written statement distributed to the media then, Khalifa said, "I gave instructions to the head of the Court of First Instance to set a hearing for the trial as soon as it receives a list of charges against the accused. Up to this point, we have been waiting for the charges to be given to the general prosecution so that we can begin work on this case."

Yet, less than two months later, on Oct. 24, the Court of First Instance in Khan Younis in the southern Gaza Strip issued a death sentence by hanging against one person convicted in the case, and issued sentences of life imprisonment with hard labor for the other four who were convicted.

The short amount of time between the crime, the filing of an indictment and sentencing made lawyer Bakr al-Turkmani, legal adviser to the Aman Coalition for Integrity and Accountability, apprehensive about the speed with which this case was addressed, while other cases were postponed.

"Public opinion usually affects criminal cases such as those involving murder and attacks. Thus, a judgment must be revised if its issuance is subject to pressure from the media or public opinion," Turkmani told Al-Monitor.

Gaza Justice Minister Atallah Abu al-Sabah also said that public opinion influences the judiciary in some cases involving violent crimes and murder. This includes cases such as killing a money changer for his money or cases involving the murder and rape of a child. He pointed out that the case involving Telbani strongly attracted public opinion, making it necessary to remain resolute and take a firm decision.

"Cases such as Telbani’s require expediting, especially since the details of the crime are horrific. Instead of adjourning a hearing for six to seven months, the case is addressed in only two to three weeks, while maintaining [the defendant's] rights in reading the files and processing in the courts, all the way to a final judgment," Sabah told Al-Monitor.

Sabah claimed that the government felt that expediting these cases enhances and regulates security in the Gaza Strip, and reduces crime rates. "All we are doing is submitting one case before another, nothing more. There are cases that are more important and more heated than others, and thus we give priority to dealing with them," he added.

Nafid Madhoun, dean of the Higher Institute of the Judiciary in Gaza, said, "Public opinion does not guide the judiciary; it [merely] influences the followed procedures. The state has the right to take into account public opinion within the limits of the law, and without subjecting [these cases] to violations."

Speaking to Al-Monitor, Madhoun noted cases that attract public opinion are granted special procedures in the courts. In these cases, this period is shortened rather than postponing the hearing for a few months.

Madhoun noted that the circumstances of the crime determine the nature of the procedures to be followed in the courts. "Thus, there is no violation of the law, but rather this is using the law to respond to public opinion," he added.

Madhoun said that the Palestinian judiciary suffers from a significant congestion of cases, resulting in long delays between hearings. "We expedite action in some important cases. We act as quickly as possible, to control crime and so that the judgments will serve as a deterrent," he said.

He also pointed out that the government has taken the decision to give priority to cases attracting public attention over other cases. Hence, while investigations and trial procedures follow the law, they are shortened.

In September alone, Gaza’s criminal justice system was involved with three death sentences against those convicted of horrific murders.

In an Oct. 8 statement, Attorney General Ismail Jaber said that the first of the three death sentences was issued by the Court of First Instance against a person convicted of killing former prosecutor Muhammad Ashram. A death-penalty sentence involving the murder of a gold trader was challenged to the Court of Appeals; it protested a capital-punishment ruling to be carried out after ratification by the Council of Ministers. A third case involved a man convicted of poisoning his wife in a premeditated murder.

According to the PCHR, 146 death sentences had been issued in Palestinian Authority areas since 1994. Of these 146 sentences, 119 were issued in the Gaza Strip and 27 in the West Bank.

The statement said 61 of those death sentences had been issued in the Gaza Strip since Hamas took control in 2007.