Citizens in the Gaza Strip are pressuring Hamas to implement the death penalties in cases of murders, robberies and physical attacks, without awaiting the endorsement of President Mahmoud Abbas. 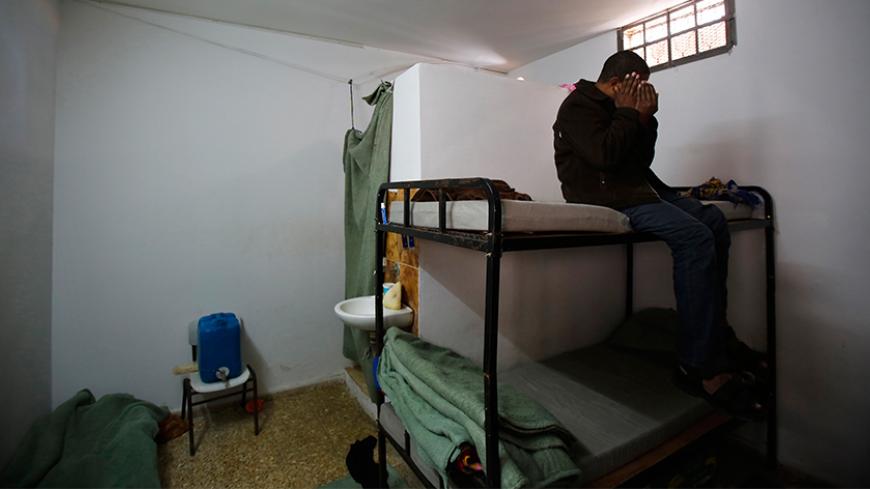 A Palestinian prisoner covers his face as he poses for the camera inside a Hamas-run prison in Gaza City, April 23, 2013. - REUTERS/Suhaib Salem

GAZA CITY, Gaza Strip — Over the last three years, murders in cases of theft, robbery and physical attack in the Gaza Strip have become common. Money changer Ameen Sharab from Khan Yunis was stabbed to death in a robbery attack on May 30, 2013. Mohammed Mahdi and his nephew Anas Tammous from Deir al-Balah refugee camp were killed against the backdrop of a family dispute on June 24, 2013. Aliyan al-Talbani from Deir al-Balah city was killed in an armed robbery on July 31, 2013. Money changer Fadel al-Astal from Khan Yunis was killed in a fight over bank checks in May 2014. Hammad Dughmosh from Gaza City was killed against the backdrop of a dispute with Abed Rabbo Abu Madin on April 25, 2016; and most recently, on May 13, Thouraya al-Badri from Gaza City was killed in an armed robbery.

There has been a significant increase in the crime rate in Gaza over the past few years. According to statistics of the public prosecutor's office, approximately 40 people were murdered in 2013, 168 in 2014 and 28 in 2015. Most murders were committed for purely criminal reasons or due to disputes resulting from bad economic conditions and the spread of poverty and unemployment.

Following search and investigation operations carried out by the investigations unit of the police in Gaza, in general criminals were caught just a few hours after the crime. The perpetrators of these crimes have been given the death penalty, and they are awaiting execution, pending a decision from President Mahmoud Abbas.

The president of the Supreme Judicial Council in Gaza, Counsellor Abdel Raouf al-Halabi, told Al-Monitor, “The death penalty in Palestine was stipulated by law and is only issued against those who deserve it. It is linked to aggravating factors of willful, deliberate and premeditated murder. The courts issued death penalties in 13 cases that met the relevant legal conditions and are awaiting implementation by the public prosecutor.”

In a press conference at the Ministry of Information in Gaza City on May 22, attended by Al-Monitor, Gaza public prosecutor Ismail Jaber said, “The public prosecutor communicates with the [Palestinian] Legislative Council [PLC] to decide on the implementation of death penalties in the Gaza Strip aimed to reduce and deter crime.”

He said, “We sent a letter to Salim al-Sakka, the former justice minister in the unity government, to ask President Mahmoud Abbas to endorse the death penalty decisions in accordance with Article 109 of the Palestinian Basic Law and Article 409 of the Code of Criminal Procedure No. 3 of 2001. But we have not received a response in this regard despite the prior agreement on the endorsement of death penalties in Gaza.”

Jaber said that the public prosecution is currently examining the death penalties to be carried out within the coming days, even if they are not endorsed by the president, although this violates the Palestinian Basic Law.

On May 16, village officials and dignitaries of families in Gaza submitted to Ismail Haniyeh, the deputy head of Hamas' political bureau, a petition urging him to rule with an iron fist by punishing the criminals who violate the law and kill people, and to implement death penalties.

Bassam al-Badri, whose mother Thouraya was murdered on May 13, told Al-Monitor, “The only punishment that would satisfy me is to see the killer of my mother hanged publicly in the presence of his parents, so that this deters anyone who dares to think about killing people and offending the sanctity of private homes.”

Muhammad al-Talbani from Gaza, the father of Aliyan, called for accelerating the implementation of death penalties against the killers of his son, so as to prevent the recurrence of such crimes and prevent people from taking the law into their own hands.

Article 415 of the 2001 Palestinian Code of Criminal Procedure stipulates that executions of civilians must be done by hanging and of soldiers by shooting to death.

The head of the legal committee at the PLC, Muhammad Faraj al-Ghoul, told Al-Monitor, “The PLC will seek to accelerate the implementation of the death penalties against murderers in Gaza and will not allow them to go unpunished.”

He added, “The implementation of the death penalties is stipulated in the Palestinian Basic Law, and the fact that these judgments are not endorsed by the president is a conspiracy aimed to bring chaos to the Gaza Strip.”

It seems that Abbas is refusing to approve execution sentences issued in Gaza because he considers them illegal and issued by courts that are not affiliated with the Palestinian Judicial Council in Ramallah.

Al-Monitor attended the sit-in staged by the families of the victims, citizens, human rights organizations, clerics, reform committees and tribesmen in front of Rashad Shawa Cultural Center in Gaza City on May 22. Head of the reform committees Maher al-Halabi spoke on their organizations’ behalf, demanding to pressure Hamas to promptly implement the death penalties against the murderers so as to prevent the aggrieved citizens from taking the law into their own hands.

Journalist Ismail al-Thawabta, director of Al-Ray media agency in Gaza, wrote on his Facebook page, “Do you support the death sentence for those convicted of murder, drug trafficking and other crimes?” Currently, 143 Facebook users say they do.

For his part, Bahjat al-Helo, awareness and training coordinator at the Independent Commission for Human Rights, told Al-Monitor, “Human rights organizations reject the execution of the death penalties. Palestine is a party to the charters on human rights, mainly the Universal Declaration on Human Rights and the International Covenant on Civil and Political Rights, which call for the abolition of the death penalty.”

Helo indicated that safeguards must be strictly abided by when implementing the death penalty — which is stipulated in the Palestinian law — in accordance with the provisions of the law. He said, “According to the law, the death penalty is final and irreversible and gives the accused the right to defend himself or appoint a defense lawyer and to appeal in court; and therefore the most important safeguard is that the execution of these penalties must be endorsed by the Palestinian president, which is not the case in the death penalties issued in Gaza due to the separation between the government and the judiciary.”

The official spokesman for the Palestinian government in Ramallah, Bassem Youssef Mahmoud, told Al-Monitor that the execution of the death penalties requires a judicial review of the judgment, which is automatically appealed without the need for any appeal to be lodged by the defendants so that it becomes final and cannot be appealed as per Article 408 of the Criminal Procedures, and the president’s endorsement.