The Hamas movement continues to violate Palestinian law in carrying out death penalties in the Gaza Strip. 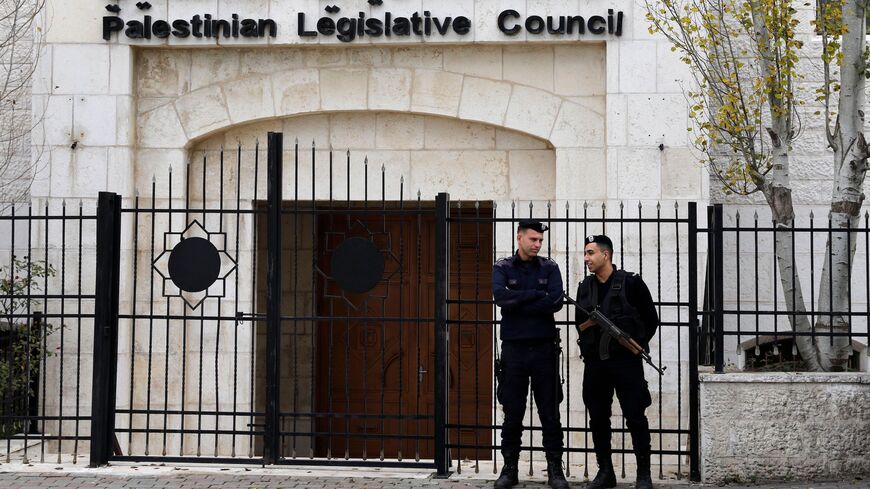 Palestinian security forces gather in front of the Palestinian Legislative Council building in Ramallah in the Israeli-occupied West Bank on Dec. 26, 2018. - AHMAD GHARABLI/AFP via Getty Images

Gaza City, Gaza Strip - The issuance of death sentences in the Gaza Strip by the Hamas-affiliated authorities continues to raise controversy among rights activists.

On Oct. 19, the Court of First Instance in the Gaza Strip issued death sentences for two people convicted of murder in connection with a family vendetta.

On Sept. 4, the security authorities in Gaza executed five citizens at dawn on Sept. 4, two of whom were accused of collaborating with Israel and the other three of murder. It was the first time since 2017 that the ruling authorities in the coastal enclave executed five people on the same day in a move widely condemned by lawyers and rights organizations.

The executions were carried out by hanging and firing squad in the Ansar security complex in the western Gaza Strip.

The Palestinian Center for Human Rights denounced the executions as a violation of Palestinian and international law. In a Sept. 5 press statement, the center said that Hamas is concerned about the spread of crime and implementing death sentences in cases that could lead to acts of familial revenge, preventing families from taking matters into their own hands. The center stressed that justice cannot be served by violating Palestinian law.

Hamas, which controls the Gaza Strip, has issued and carried out several death sentences since the Palestinian division in 2007 without the approval of the Palestinian president, which is required by law.

According to the Palestinian Center for Human Rights, Gaza courts have issued 24 death sentences so far in 2022, including six rulings issued by military courts and five sentences that increased previous penalty judgments by the Court of Appeals.

Meanwhile, the Palestinian Authority has not carried out any execution since 2018, when it joined the 1989 UN Second Optional Protocol to the International Covenant on Civil and Political Rights, which aims to abolish the death penalty.

Muhammad al-Talbani, a doctoral candidate in law, told Al-Monitor, “Given the seriousness of death sentences, the international law differentiates these sentences from other punishments. According to Palestinian law, any death sentence verdict must be unanimous.”

He added, “Therefore, the execution of death sentences by the ruling authorities in Gaza without the ratification of the PA president is a clear violation of the provisions of the Palestinian Basic Law, which serves as a temporary constitution for the state of Palestine," and "In addition, the Palestinian state joined the international protocol that prohibits death penalties.”

Talbani went on, “Hamas seizing and monopolizing power in Gaza in 2007 has led to divisions in the legislative, judicial and governmental powers, affecting the work and independence of the judiciary. Accordingly, division prevailed over the courts in the Gaza Strip whose composition and legal proceedings became politicized, which raised doubts about the credibility of fair trials.”

He further clarified that Reports by human rights institutions in Gaza, the Palestinian Center for Human Rights and the Independent Commission for Human Rights, reject these death sentences due to the lack of guarantees that the trials are fair.

Ahmad al-Khalidi, a rights activist based in Gaza, told Al-Monitor, “The recent wave of executions that are carried out outside the legal and constitutional frameworks in the Gaza Strip is a dangerous indicator. It shows that death sentences could be issued based on the mood and preferences of the judge. It also raises questions about the fairness of trials.”