IS loses ground in Sinai, searches for other foothold in Egypt

The Islamic State has carried out several terrorist attacks against Copts in different Egyptian governorates, raising questions about anti-terrorism laws and the efficiency of the security services. 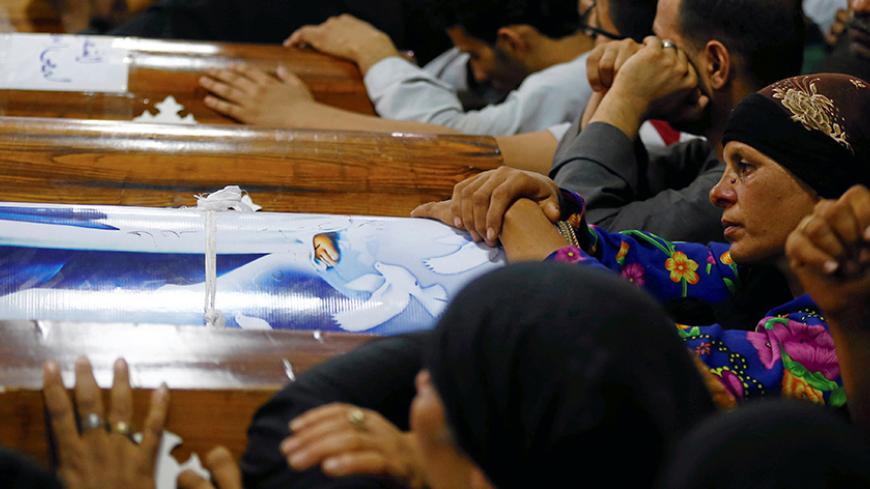 Mourners gather at the Sacred Family Church for the funeral of Coptic Christians who were killed in Minya, Egypt, May 26, 2017. - REUTERS/Mohamed Abd El Ghany

CAIRO — The Egyptian Interior Ministry announced June 22 the killing of seven people it believed were involved in recent attacks against Copts, including church bombings and shootings in which about 100 people were killed. The ministry said in a statement it was “certain that a group of individuals had been stationed in some areas in the Western Desert, where they received military training on how to use weapons and assemble explosive devices in order to carry out more terrorist attacks.”

The latest terrorist attack in Minya governorate May 26 that killed 29 people, mostly Copts, raised questions about the Islamic State’s ability to establish cells with armed elements and a safe network to recruit fighters in Upper Egypt.

Najah Ibrahim, a freelance researcher and writer on armed groups, told Al-Monitor over the phone that IS’ choice of Upper Egypt as its new refuge and target was a not a spur-of-the-moment decision; IS had already tried to launch a new branch two years ago in Upper Egypt through a failed terrorist attack on June 10, 2015, near Karnak Temple in Luxor.

Ibrahim said IS has a safe network to recruit fighters in Upper Egypt, especially in Qena. “Upper Egypt provides a fertile environment for this group to prosper since it is the poorest and least educated area [in Egypt], is marginalized by politicians and lacks security,” he said.

He said the group adopts a method of operation that is specific to IS, which is repeated terrorist attacks that leave a great impact on the local population. When it discovered that its goal to declare Wilayat Sinai (the Islamic State in Sinai) was difficult and would not be achieved, it turned to targets that are difficult to secure, such as churches.

Ibrahim does not rule out the possibility of IS' running a center that manages operations in the Western Desert, as he believes the fighters are highly trained and may have received their training in Libya or Syria.

Brig. Gen. Khaled Okasha, the director of the National Center for Security Studies, told Al-Monitor over the phone that IS is trying to gain a foothold elsewhere in Egypt after its role dwindled in the Sinai Peninsula. IS carried out various terrorist attacks in the Nile Delta, the coastal area and Upper Egypt to showcase that the group is spreading throughout Egypt.

Okasha said it was easy for IS members to hide in Upper Egypt because security control is weak in the area. There they can find logistical support such as supply lines for weapons and passageways for fighters to enter undetected — all of which may not be available in other provinces.

Okasha said that Egypt has a strong legislative support system to counter terrorism, but that there are gaps in security procedures and some security officials are not capable of handing such a responsibility.

Okasha ruled out that the group would have the ability to seize any territory inside Egypt, saying, “Geographically, this can never happen.” IS is only betting on carrying out more operations and inflicting more damage. It chooses the most difficult targets to defend and most harmful for civilians and Copts in particular.

He added, “Egypt needs counterterrorism units to operate in a decentralized manner as well as a unit to collect information, research and analysis — all of which we unfortunately lack.”

Hassan Abu Haniyeh, a resident of Jordan and an independent researcher on armed groups, told Al-Monitor over the phone that IS is expanding inside Egypt through cluster cells that are difficult for security services to track.

Abu Haniyeh said that the laws are not a deterrent to terrorist organizations and declaring a state of emergency in Egypt on April 9 did not have much of an impact. This is why in the near term, the Egyptian security services should focus on intelligence work and strengthen cooperation with other countries. In the long term, Egypt should work on reducing the divisions that followed the ouster of President Mohammed Morsi in 2013 and develop military and security approaches that separate the moderate from the extremist.

Yahya al-Kadwani, a member of the parliament’s National Defense and Security Committee, told Al-Monitor that laws are important elements in a comprehensive strategy to counter extremism. “They also help the security services and we, in fact, have an important legislative framework to combat terrorism,” he said.

Kadwani said that Egypt is striving to strengthen cooperation with Europe in terms of intelligence, but that it is suffering from a “stalemate” with some countries, including Britain, Ireland and Canada — without giving details about the reason behind the deadlock.

He said the committee had made recommendations to the government to pay more attention to Upper Egypt and provide the needed services, but the government can only work with the available resources.

Al-Monitor asked Maj. Gen. Tariq Atiyyah, the director of relations and information at the Ministry of Interior, to comment on this topic, but he suggested that comments should come from the national security apparatus. Al-Monitor tried to contact the latter, but to no avail.

President Abdel Fattah al-Sisi launched May 26 airstrikes on militants in Libya in response to the Minya attack, but reports said these strikes did not target those responsible for the attack. Defense Minister Sidqi Sobhy said June 1 that the goal of the strike on Libya was to deter “terrorist organizations” and the forces supporting them.