Even as the Trump administration says it wants to avoid clashing with Assad and his allies, experts say a lack of a clear US strategy in Syria makes confrontation more likely. 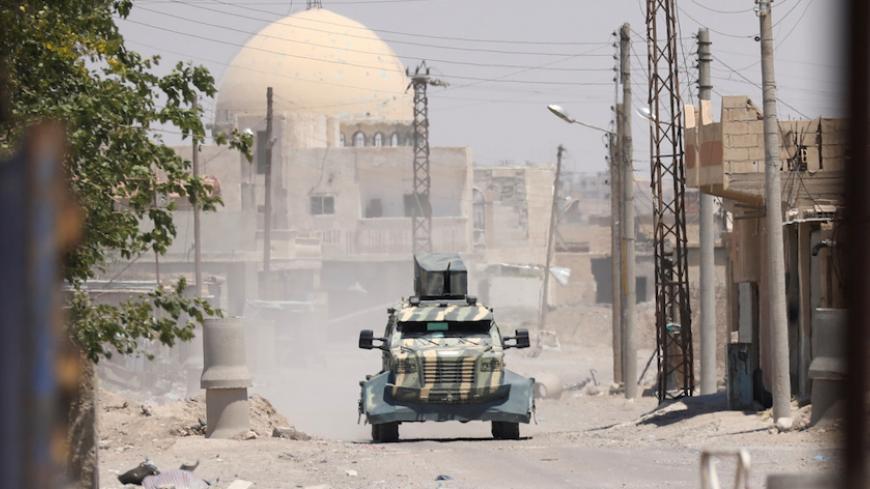 WASHINGTON — The United States scrambled today to calm escalating tensions in Syria a day after the US-led coalition shot down an Assad regime warplane and Iran launched missile strikes against the Islamic State (IS).

Sunday's destruction of a Soviet-era fighter-bomber by a US Navy jet marked the first time that the United States has shot down a Syrian aircraft in the six-year civil war. That same day, Iran fired several missiles at IS targets in Deir ez-Zor, eastern Syria, the first time in more than 15 years that Tehran has fired missiles at a foreign country.

Further escalation between rival forces “doesn’t help anybody,” White House press secretary Sean Spicer told journalists today. "While we want to de-escalate the situation there … we will always preserve the right to self-defense.”

The US-led coalition said Sunday that it had shot down a Syrian Su-22 south of Tabqa after pro-Assad regime forces attacked US-backed Syrian Democratic Forces (SDF) there. In response, Russia said today it was suspending a “de-confliction” communications channel used to avoid accidental altercations with the US-led coalition operating in Syria. The Pentagon expressed patience at the announcement, saying it was available any time to resume communications with Russia.

“The only actions we have taken against pro-regime forces in Syria … have been in self-defense, and we have communicated that clearly,” the chairman of the Joint Chiefs of Staff, Joseph Dunford, said at an event at the National Press Club today.

The US-led coalition stressed in a statement after the downing of the Syrian jet that it is focused only on defeating IS and does not seek confrontation with the Syrian regime or its allies. But the coalition will defend its partner forces, including local allies, the statement said.

“At 6:43 p.m. [June 18], a Syrian regime Su-22 dropped bombs near SDF fighters south of Tabqah and, in accordance with rules of engagement and in collective self-defense of Coalition partnered forces, was immediately shot down by a U.S. F/A-18E Super Hornet,” the Coalition Joint Task Force for Operation Inherent Resolve statement said.

“The Coalition’s mission is to defeat [IS] in Iraq and Syria,” the coalition statement said. “The Coalition does not seek to fight Syrian regime, Russian, or pro-regime forces partnered with them, but will not hesitate to defend Coalition or partner forces from any threat. The Coalition calls on all parties to focus their efforts on the defeat of [IS], which is our common enemy and the greatest threat to regional and worldwide peace and security.”

The clashes come as the State Department was said to have completed a provisional Syria strategy review, Syria experts told Al-Monitor.

The State Department's Syria strategy “is very minimal,” Hassan Hassan, a senior fellow with the Tahrir Institute for Middle East Policy, told Al-Monitor. “It is trying to reassert that the focus is [IS] and [IS] only, and then after that, it doesn’t matter what happens after [IS] is removed.”

The plan “is not finalized,” Hassan said. “It … has not yet been approved by [Secretary of State Rex] Tillerson. It has not reached the White House yet.” The State Department had no comment.

Hassan said there appeared to be a misunderstanding that the Trump administration was seeking to confront Iran in Syria. In his judgment, it is Iran that has been seeking to test and push back against US-backed forces in Syria. US jets last month fired on Iranian-backed militias that the United States said were advancing on a US-backed opposition base at al-Tanf, in southeastern Syria.

Iran’s message to the United States is “we can make things messy for you in Iraq and Syria,” Hassan said.

But the United States risks that its actions in Syria will be misunderstood without a more clearly articulated strategy, said Syria expert Charles Lister.

“Unless the United States declares its long-term intentions in Syria more clearly, we will be faced by many more such acts of ‘self-defense,’” Lister wrote at the Middle East Institute’s website. “Enhanced US assertiveness in Syria is not a bad thing, per se, but it remains dangerous when practiced through such an ambiguous lens.”

“The Iranians are probing US defenses and certainly testing the US,” Aaron Stein, with the Atlantic Council, told Al-Monitor. “The US policy is to bomb them and claim self-defense. But there is no policy after that. This is where it creates a vacuum outside of presidential leadership.”

The Defense Department “is willing to step it up against Iran, but not at the expense of countering IS,” Stein said. “They are willing to put pressure [on Iran] elsewhere at a place of our choosing, so it doesn’t screw up Raqqa.”

Notably, the Trump administration has said little after Iran launched six medium-range surface-to-surface missiles 700 kilometers (435 miles) from western Iran to strike IS targets in the eastern Syrian city of Deir ez-Zor on Sunday. Iran said the strikes were retaliation for the June 7 IS terrorist attacks on Tehran’s parliament and Khomeini’s mausoleum. While the strikes targeted a common enemy, the display of its ballistic missile capabilities also sent a message to US allies that have been emboldened by the Trump administration’s more hostile rhetoric about Iran, analysts said.

“Iran has been able to kill multiple birds with one stone: retaliate against a stunning [IS] attack at the heart of its capital; defy new US sanctions against its ballistic missile program; [and] project power and deter the Saudis from further challenging it in the region,” Ali Vaez, senior Iran analyst at the International Crisis Group, told Al-Monitor.

“The strike further complicates an already complex situation,” Vaez said. “If the US takes measures beyond rhetorical condemnation, tensions could escalate too far too quickly.”

Al-Monitor has learned that the Trump administration offered its condolences to Iran for the June 7 IS attack. On the day of the attack, Trump released a mixed White House statement that offered prayers for the “innocent victims of the terrorist attacks” while adding that “states that sponsor terrorism risk falling victim to the evil they promote.”

"We sent condolences via diplomatic channels after the terror attack,” a State Department official confirmed.

Iranian Foreign Minister Mohammad Javad Zarif, however, told Al-Monitor in an e-mail that Tillerson had not personally called him to convey condolences.

Zarif took to Twitter today to emphasize that Iran’s missile strikes targeted the common enemy of IS and “extremist terror.”

Zarif and the US-led coalition are stressing in their statements that the common fight is against IS, said Randa Slim, a Levant expert at the Middle East Institute.

“I think the coalition statement conveyed, on the one hand, we are not going to let you stop our allies in Syria from finishing the task,” Slim told Al-Monitor. “On the other hand, we have a common enemy, indirectly, we have to work together.”

“Zarif’s statement … is basically emphasizing … that Iran struck [IS], the common enemy,” Slim said. “[It] is sending a message to the Americans, that we share a common enemy and need to work together in defeating and degrading the enemy.”

But Dunford did not acknowledge Iran’s strikes on IS when asked about Iran in Syria today. “Iran is playing an unhelpful role in Syria and elsewhere in the Middle East,” the joint chiefs chairman said. “Iran is not focused on [IS] inside of Syria. Iran is focused on propping up the regime that committed atrocities … in the civil war.”

Correction: June 20, 2017. Because of an editing error, an earlier version of this story inaccurately stated that Iran had not fired missiles at a foreign country in three decades. In fact it has only been about 15 years.