Iraqi factions divided over whether US troops stay

Despite strong opposition from influential Shiite factions ready to engage in military clashes with US forces, the Iraqi government wants an agreement with the United States to ensure that US troops remain in Iraq after the elimination of the Islamic State. 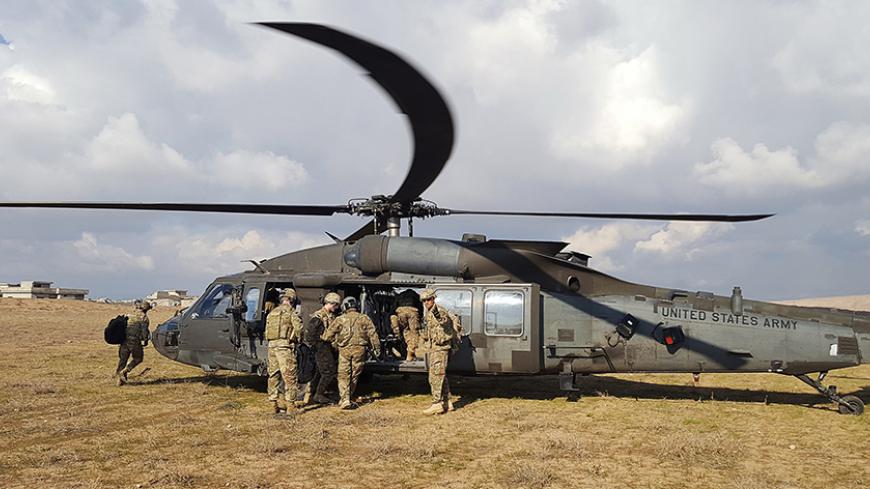 US soldiers board a helicopter at a military base north of Mosul, Iraq, Jan. 4, 2017. - REUTERS/Stephen Kalin

Iraqi Prime Minister Haider al-Abadi is talking with the US administration to keep US troops in Iraq after the fight against the Islamic State (IS) is over, the Associated Press (AP) cited Iraqi and US officials as saying on May 5. US officials confirmed to the AP on condition of anonymity that the United States and Iraq agreed on the need for a long-term US presence aimed at warding off the threat of another armed rebellion. However, the growing polarization in the region and the tightening policy of regional rivalries are hindering the conclusion of such an agreement.

Similarly, Naim Aboudi, a spokesman for Asaib Ahl al-Haq, stressed that his faction rejects the US presence in Iraq. He told Al-Monitor, “The victories achieved by our heroic army and the Popular Mobilization Units [PMU] have given further power to the Iraqi state. And Iraq can use this power to ward off any foreign threat. Iraq does not need any foreign power at the moment. Self-reliance is the best way to maintain the sovereignty of Iraq.”

Asked about the possible targeting of US forces by Asaib Ahl al-Haq in the event that there is a decision to extend their stay in Iraq, Aboudi did not respond. However, the military media office of Saraya al-Salam threatened US forces and stressed that “all options are on the table.”

In an attempt to calm this atmosphere, the Iraqi prime minister's office issued a statement May 5 confirming that “the Iraqi government did not agree with any state about any military role following the decisive victory over terrorism.”

However, Saad al-Hadithi, a spokesman for the prime minister’s office, confirmed in a TV interview on the same day the Iraqi government’s intention to reach an agreement to keep the American troops in Iraq. “We want sustained cooperation with these countries in the coming period in order to meet the security challenges,” he said.

“We certainly need a number of these trainers, experts and advisers, and we hope to develop an integrated coordination system in the coming period, not only with the United States but also with many other countries in the world in a bid to upgrade the Iraqi forces' capabilities and readiness.”

The prime minister's office reiterated, “There are no foreign combat forces on Iraqi soil.” But since the arrival of Donald Trump in Washington and the start of the operations to liberate west Mosul, US forces have stepped up their military role and have been operating closer to the front lines.”

Kurdish photojournalist Rebin Rozhbayane accompanied the US forces that were getting ready to launch an attack on the July 17 district in Mosul on May 2 and filmed a large US military convoy on its way to the battlefront. Rozhbayane told Al-Monitor that he counted 50 US military vehicles, noting that “the US forces backed the Iraqi forces in these operations during the day. But they participated directly in evening attacks on IS areas.”

Former Iraqi Ambassador to the United States Lukman Faily does not agree with the Asaib Ahl al-Haq spokesman who believes Iraq does not need the US forces. Faily told Al-Monitor, “Iraq does not have the needed components to protect its borders. To reach political and security stability, it needs to develop the capacities of its army through US sponsorship and aid, especially in training, preparation and equipment.”

One of the main challenges for the upcoming phase is to control the long Iraqi borders with Syria after IS is eliminated. Since 2003, Iraq has failed to secure these borders, and it does not have well-trained forces and necessary technology to halt the infiltration of IS forces from the borders, especially as IS controls eastern Syria. Iraq needs satellites, military air force and helicopters as well as strong logistic effort to achieve this mission. This must happen without alienating the locals — the Sunni Arabs. Thus, the task must be entrusted to the Iraqi official forces. Shiite factions from the PMU are also trying to reach the borders.

Besides, Iraq needs to build a strong intelligence service that is up to the security challenge. Previous experience and new reports indicate that IS and al-Qaeda will conduct terrorist operations in the coming phase.

Iraq’s needs are not limited to the security and military sectors. The high cost of the war amid falling oil prices necessitates that Iraq ask for help from the international community in which the United States is a key player.

Many Iraqi parties, especially the Shiite ones, believe that the American presence in Iraq aims at supporting the enemy, i.e., Saudi Arabia, Qatar, Turkey and Israel, at the expense of Iran and its allies. Faily asserted that the situation is complicated, saying, "Iraq is now at a crossroad. Different polarization fronts are at play, and they will increase pressure on Abadi.”

Ultimately, the balances in the region will play a pivotal role in Iraq’s future. Any decision that Abadi makes might put Iraq in the eye of the storm again.