After the meeting between the Turkish and US presidents, it seems that the two country's diplomatic problems will continue, but there could be some slight improvements in military cooperation. 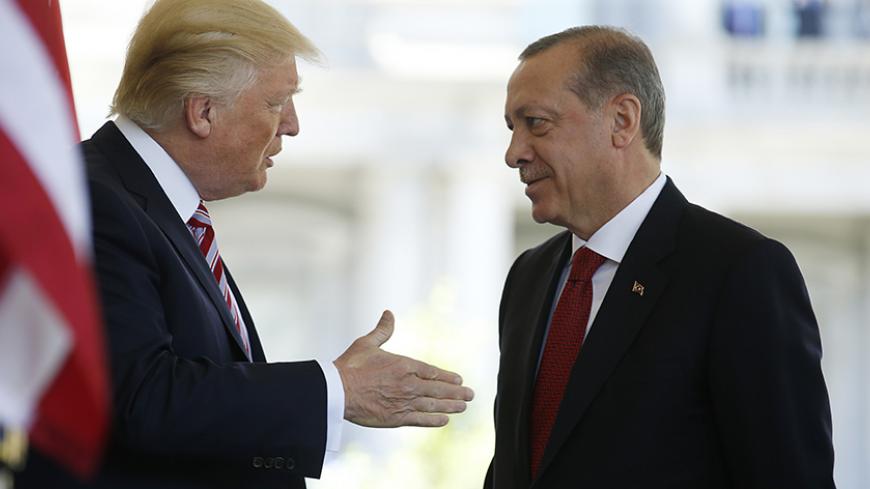 US President Donald Trump (L) talks with Turkey's President Recep Tayyip Erdogan as he arrives at the White House in Washington DC, May 16, 2017. - REUTERS/Joshua Roberts

Turkish President Recep Tayyip Erdogan went to Washington hoping he could end US support for the Kurdish People's Protection Units (YPG), which are affiliated with the Kurdistan Workers Party (PKK), a group recognized by both Turkey and the United States as a terrorist organization. However, neither Erdogan nor US President Donald Trump could change the outcome of their much trumpeted meeting. The problematic US-Turkish relationship will continue.

Turkey created facts on the ground with its April 25 bombing of PKK positions in the Sinjar area in northern Iraq and Karachok in northern Syria. Erdogan has implied the possibility of an operation against Sinjar and the Syrian Kurdish cantons of Kobani and Jazeera by saying "we could come unexpectedly one night" and trying to increase his persuasive powers. Ankara intended to demonstrate that it has the power to take unilateral action against the two Syrian Kurdish cantons and Sinjar. But given the decisive position of the Trump administration, Ankara does not have the initiative to undertake a ground operation or airstrikes anymore.

Erdogan's White House visit consisted of a 23-minute one-on-one meeting with translators, a 20-minute press briefing (of sorts) in which the two presidents gave short speeches without taking questions and a 90-minute lunch attended by Erdogan's eight-person delegation and Trump's six-person team.

Was everyone pleased with the result?

The Turkish delegation did not return to Ankara satisfied. Nobody can claim that the Turkish team came back having received what it wanted from their first face-to-face contact with the Trump team.

Although Trump authorized the delivery of weapons to the YPG immediately before Erdogan's arrival in Washington, the Turkish president did not postpone or cancel his visit, proving that he cared deeply about a photo-op with his American counterpart at the White House. Erdogan's primary goal was to be received by Trump with a smile at the White House. He achieved that.

What, then, did Turkish and American officials take away from this meeting?

Ankara understood that the United States will not give up its alliance with the YPG in the Raqqa operation, which is likely to last at least one year, and that the US side is determined to arm the YPG in the struggle against the Islamic State (IS). So what did Ankara get from the United States in return for staying away from the Kobani and Jazeera cantons that will be empty of its Kurdish fighters, who will be fighting on the Raqqa front for at least a year; for keeping its distance from Sinjar; for not severing the YPG’s main supply lines and not harassing them with long-range artillery strikes from its borders?

Trump did not answer that question, saying briefly in his statement that the United States still considers the PKK a terrorist organization. The US narrative can be slippery when the topic is relations with the PKK and the YPG. The United States may want to underline emphatically that it does not treat the YPG as part of the PKK and may therefore offer more cooperation to Ankara in the fight in northern Iraq.

The United States may decide to share more intelligence with Ankara over the Kurdish-dominated Avasin-Basyan, Zap and Hakurk regions on the Turkey-Iraq border and the Qandil Mountains, where the PKK's main headquarters are located. Washington may even greenlight a cross-border Turkish ground operation against these areas.

In addition, the Trump administration may have promised to provide Turkey with the critical weapons systems it has been unable to buy since such deals have been mired in the US Congress. Since 2008, there has been much complication in Turkey's purchase of Predator unmanned aerial vehicles (UAVs), Sikorsky S-70 general-purpose helicopters and guidance kits for munitions such as MK-82, MK-84 and the bunker buster BLU-109.

Turkey has had problems acquiring these munitions because of their heavy use in recent operations against the PKK.

Sources who spoke to Al-Monitor on condition of anonymity said Ankara wants to procure from the United States optical lenses and spare parts that are not manufactured in Turkey but that are needed for advanced UAV production.

Turkey had also put in requests for the three Oliver Hazard Perry-class guided-missile frigates and a tow boat. Two of the US Navy's Perry-class frigates, the USS Halyburton and the USS Thatch, which have been decommissioned by the US Navy, are slated to be donated to Turkey under a Naval Transfer Act that was submitted to the US Congress in 2012. The Senate, however, shelved the act. It is probable that Trump may have promised to move forward on that front.

Trump may also have promised that the Raqqa operation is being planned with attention to Turkey's concerns and demands; that Ankara will be fully informed of all weapons given to the YPG; that there will be no YPG units in and around the town of Raqqa after the operation and that some elements of Turkish special forces may be allowed to observe the operation on the ground. Turkey also expected a US promise to set up a center in Ankara to be informed of all developments about the operation in real time.

The Turkish side also expects the United States to promise closer cooperation to contain Iran in Syria, Iraq and the region.

In a nutshell, Erdogan's US visit and his meeting with Trump may have momentarily cooled the tension between Washington and Ankara, but "crisis mode coexistence" is likely to prevail. Neither Ankara nor Washington were happy with the outcome of the meeting. The Raqqa imbroglio was not resolved, but the two sides didn't burn their bridges. Divergences between the two capitals continue, but attempts were made to minimize negative sentiments. This tense coexistence between Turkey and the United States will no doubt affect all actors in the region, including the PKK and the YPG.