Does Turkey plan to continue airstrikes in Iraq, Syria?

Turkey’s recent bombings of groups it says are linked to Kurdish terrorists give Russia and the United States something else to agree on. 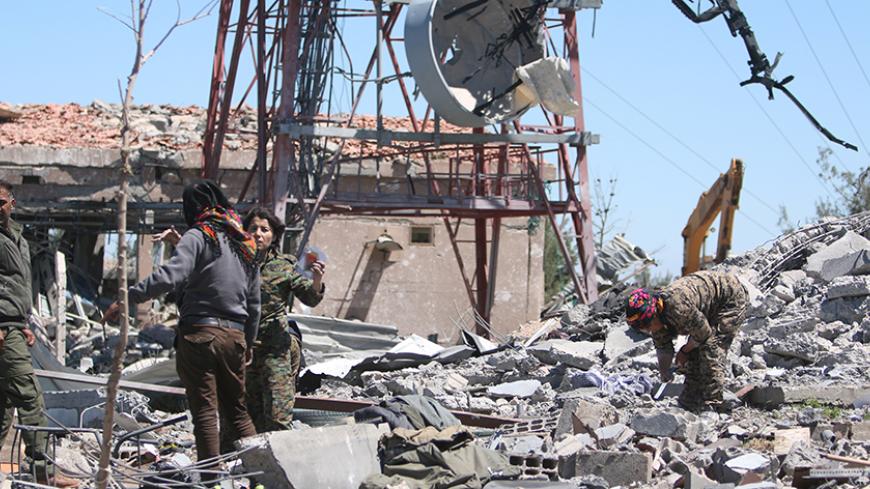 Fighters from the Kurdish People's Protection Units inspect the damage at their headquarters after it was hit by Turkish airstrikes in Mount Karachok near al-Malikiyah, Syria, April 25, 2017. - REUTERS/ Rodi Said

Turkey's airstrikes on Kurdish regions in Syria and Iraq recently raised many an eyebrow around the globe. They left world leaders wondering if there will be more strikes and, if so, how the escalation will unfold. This article is a sequel to Amberin Zaman’s piece on April 25 that reflected the viewpoints of the United States, the Kurdish Democratic Union Party (PYD) and Baghdad. This will focus on the perspectives of Ankara and Moscow, Ankara's strategic calculations behind the attacks and Moscow’s position on the events.

Without doubt, the field situation in northern Syria has heated up. We have to note the serious clashes between the YPG and the Turkish army in the areas of Tal Rifaat, Tal Jibrin, Qari Baba, Derbisi and Maranez, and remember that Turkey has been pounding areas across the border constantly with 155 mm howitzers. On April 26, YPG militants fired anti-tank guided missiles four times and mortars several times at Turkish army border outposts at Hatay, Kilis and Mardin. Two Turkish soldiers were wounded, and two Turkish tanks and some other vehicles were damaged. These clashes are causing much concern, as they could grow into all-out battles.

The April 25 attack was Turkey's first simultaneous, coordinated, major air operation against PKK-linked targets in Iraq and Syria. While announcing the operation, Ankara officials did not feel the need to blame any attack from the other side as a pretext. The first statement by Chief of General Staff Hulusi Akar was clear: “Operations will continue as long as the threat prevails. We are assessing the situation and will decide accordingly.”

Ankara’s undeclared intention appears to be creating situations on the ground to probe the intentions and seriousness of the United States in cooperating with PKK-linked Kurdish armed groups in northern Syria and Iraq. Ankara wanted to test the waters with the United States in the lead-up to the much-awaited May 16 meeting scheduled between Presidents Donald Trump and Recep Tayyip Erdogan. Turkey will decide what it wants from that meeting based on the United States' reaction to Turkey's air attacks.

The official statement of the Turkish high command emphasized that the PKK-linked groups in Iraq and Syria have been smuggling into Turkey sophisticated weapons systems such as anti-tank guided missiles and shoulder-launched missiles, and significant amounts of military-grade explosives. Turkey has noted increasing use of these items in attacks inside its borders. The Turkish military is taking seriously PKK claims that its affiliated groups in northern Syria blew up the police building in Diyarbakir by digging a tunnel under it and planting explosives. Officials believe the groups smuggled in the 700 kilograms (1,543 pounds) of TNT-type explosives used in the April 11 attack.

Turkey's air attacks on April 25 were accompanied by a well-organized, intensive public relations effort designed for domestic public consumption. Turkish media was flooded with photos of Akar and air force commander Abidin Unal at the operations headquarters directing the attacks, and photographs taken by F-16s during the actual attack. The public was being told that the Turkish Armed Forces are recovering from the July 15 coup attempt and all is going well in the revamped Turkish security sector.

Will such operations continue? The answer will be determined by reactions of first the United States and then Russia.

I had earlier written that I wasn’t expecting a Turkish ground operation at Sinjar west of the Euphrates River, where Russia has air superiority, or east of the river, where the United States controls the air space. But I had noted that a Turkish ground operation with or without the participation of allied Kurdish peshmerga forces in the mountainous regions of Avasin-Basyan, Zap and Hakurk along the Turkey-Iraq border was possible because of the relatively low interest of the United States and Russia in those areas.

In that case, it will be interesting to watch US planes taking off from Incirlik Air Base in Turkey in attempts to prevent Turkish airplanes from entering the no-fly zone. If the no-fly zone over Syria and Iraq is also applied to Turkish planes, can Turkey retaliate by closing its airspace to coalition planes? That is a critical question.

Russia’s reaction to the Turkish air attacks was interesting. Political science expert Kerim Has of Moscow State University told Al-Monitor Russia did not rush to express its reaction. “The first reason for the slow reaction was the Russian expectation of even more stress in US-Turkey relations. When you hear the statements from Ankara and Washington, Russia was vindicated. Deteriorating ties between the United States and Turkey because of the YPG issue, which could expedite Turkey's possible NATO exit, is a strategic gain for Moscow. A short-term gain may be apparent after Erdogan and [Russian President Vladimir] Putin meet May 3, strengthening Russia’s hand in the Syria issue. The second reason for Russia’s slow reaction is this: Moscow wanted to augment the dependence of PYD/YPG on Russia.”

That explains why the first reaction from the Russian Foreign Ministry, two days after the Turkish attacks, was strongly worded, calling the actions "unacceptable."

Has says there are two critical points in the Russian official reaction: First is the criticism of Turkey for carrying out air attacks without the permission of the sovereign states of Iraq and Syria. The second point is that Russia considers PYD/YPG forces to be “truly fighting” terror organizations. In this case, Moscow’s vision of the PYD and the YPG overlaps with that of Washington. Russia’s first strong backing of PYD/YPG forces so openly in an official statement could well be a signal that the groups may count on more protection from Moscow. Has pointed to Russia's increased military presence in YPG-held Afrin, a common stand between the United States and Russia to thwart Turkey's desire to take Kurdish-controlled Manbij, and Turkey’s ending of its stymied Operation Euphrates Shield.

“Even if there are divergences in other issues, the United States and Russia are moving toward a much more concrete and serious convergence of interests. Russia may well give a green light to the no-fly-zone proposals over northern Syria that it had been rejecting,” he concluded.

Ankara is now awaiting Washington’s next move while Russia is preparing for the May 3 meeting between Putin and Erdogan, which will be followed by the Trump-Erdogan meeting May 16. The month of May promises to be an animated one in the Ankara-Washington-Moscow triangle.