How to read Trump’s blow to Turkey on Syrian Kurds 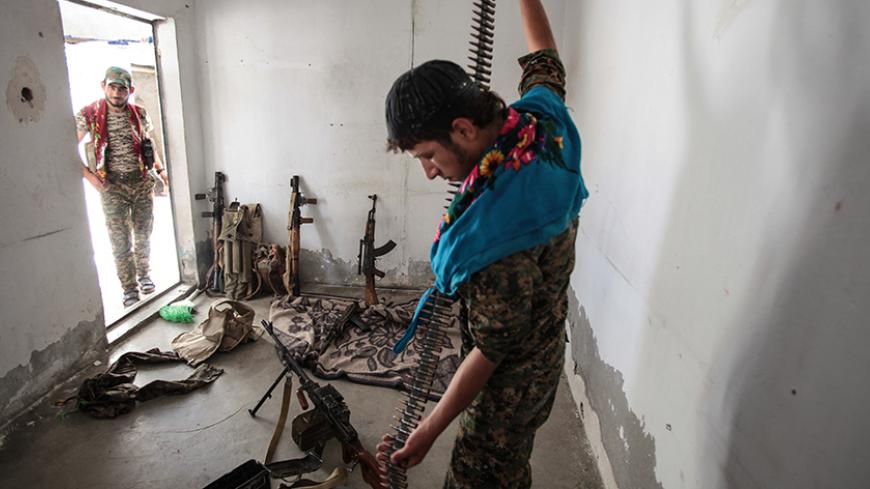 There should be no doubt that President Donald Trump’s approval of a plan to directly arm Kurdish forces in Syria is a severe, devastating blow to President Recep Tayyip Erdogan’s obstinate efforts to undermine the relationship of the Syrian Kurdish Democratic Union Party and the People's Protection Units (YPG) with Washington.

The decision is an additional inflammatory step in the already strained US-Turkey relations emanating from divergences over Syria. The relationship between the two NATO allies was dislocated during President Barack Obama's administration, primarily due to divergences on Washington’s approach to the Kurds in Syria. Yet even Obama had not gone the extra mile to anger Erdogan (or the Turks) by giving approval to directly arm the YPG. In mid-October 2014, when the United States provided air support to the besieged Kurds in Kobani, the move was recorded as a milestone in the problematic relations between the United States, Turkey and the Kurds.

From the official Turkish viewpoint, that air support was seen — and not wrongly — as a “political statement,” as much as military and humanitarian assistance to thousands of people desperately struggling to survive under Islamic State (IS) siege following the capture of Mosul and Raqqa. The air support had made Turkey’s ally — the United States — strange bedfellows with the alleged branch of the Kurdistan Workers Party (PKK) in Syria, the PYD/YPG.

Since then, rifts have developed between Ankara and Washington that culminated in Erdogan’s courting Trump, hoping that with him the prospects of Turkish-American relations on Syria — mainly on the issue of Syrian Kurds — would be different than those of the Obama era.

The Turkish side insists on saying that Washington should cooperate with Turkey instead of the Syrian Kurds for the ultimate Raqqa operation against IS.

Turkey detected positive signals from Washington and interpreted them to mean that Erdogan’s ostensibly pro-Trump attitude would be rewarded in the upcoming operation to liberate Raqqa. Despite the protestation in Washington's political milieu, Trump called Erdogan to congratulate him on the April 16 referendum results even as they were being contested inside and outside of Turkey — thereby legitimizing the alleged fraud.

Erdogan is to meet Trump on May 16, a much-heralded event on the Turkish side over the past couple of weeks. Prior to this visit, Erdogan dispatched his top confidants on security issues, including head of Turkish Intelligence Hakan Fidan, Justice Minister Bekir Bozdag, Chief of the General Staff Gen. Hulusi Akar and — as if a “political commissar” — his own spokesman, Ibrahim Kalin, to Washington to meet with the American authorities to pave the way for a successful outcome of the two presidents' encounter.

The main purpose of the Turks' visits to Washington was to dissuade the American side from supporting the Syrian Kurds for the Raqqa operation that aims to recapture the “Syrian capital” of IS. The main interlocutor of the highest-level Turkish delegation in Washington was Lt. Gen. H.R. McMaster, Trump’s national security adviser.

While the Pentagon on May 9 publicized its decision that had shocked Turkish officials the day before, chief Pentagon spokeswoman Dana W. White said the Syrian Democratic Forces (SDF) are "the only force on the ground that can successfully seize Raqqa in the near future." To many, the SDF is synonymous with its main component, the YPG. Aware of this and thus trying to assuage Turkish resentment, she added, "We are keenly aware of the security concerns of our coalition partner, Turkey. We want to reassure the people and government of Turkey that the United States is committed to preventing additional security risks and protecting our NATO ally."

The same day, hours before the official disclosure of Trump’s decision to directly arm the Syrian Kurds, Reuters quoted Secretary of Defense James Mattis as saying, "Our intent is to work with the Turks, alongside one another, to take Raqqa down — and we're going to sort it out, and we'll figure out how we're going to do it."

The Turkish reaction was unexpectedly low-key, given — in terms of the timing and the substance of the matter — the heavy blow inflicted upon Turkish-American relations and its ramifications in Turkey. The decision, beyond any doubt, looks to have a very strong negative bearing on the future.

Prime Minister Binali Yildirim invited the United States to make a choice — as if it has not already done so — and said, “It is impossible for Turkey to accept the initiatives that would mean supporting the PKK directly or indirectly."

A similar statement was made by Foreign Minister Mevlut Cavusoglu, who emphasized that all of these issues will be addressed during the meeting between Erdogan and Trump.

Erdogan, at a joint press conference with the president of Sierra Leone, touched on the issue but did not even go as far as his prime minister and foreign minister. He limited his reaction and said that he "will convey" his "concern” on the matter to Trump during their meeting. Erdogan expressed his “hope that there could be a reversal of the mistake committed.”

Well-known for his fiery speeches — and taking into consideration how sensitive the issue of arming the Syrian Kurds is and that it has been the mainstay of his resentment against Washington in Syria — Erdogan’s remarks were incredibly weak.

There will no reversal of "mistakes committed," and Erdogan knows it very well. Turks were aware that the Pentagon — the lead agency of the American administration — was calling the shots in Syria and determined to go with the SDF and the YPG for the liberation of Raqqa. For the Pentagon, the issue was not whether to replace the Kurds with Turkey. It was how to keep Turkey on board.

Since Trump endorsed the Pentagon’s decision before meeting with Erdogan — and while a high-level delegation dispatched by Erdogan was still in Washington — it is quite certain that America took the step after long consideration and calculation.

What motivated this decision?

Therefore, Trump’s decision to directly arm the Syrian Kurds automatically restrains Turkey’s freewheeling in dealing with Syrian Kurds and also sent an implicit message to Turkey that Washington is unlikely to endorse Turkey’s flirtation with Moscow and Tehran in the Middle East.

From the unusually muted attitude of Erdogan, it seems the Turkish side received the message in the way the American side wanted it to be received.