The battle for Raqqa is near as arms from the United States are dispersed among the coalition’s Kurdish ally, the Syrian Kurdish People’s Protection Units. 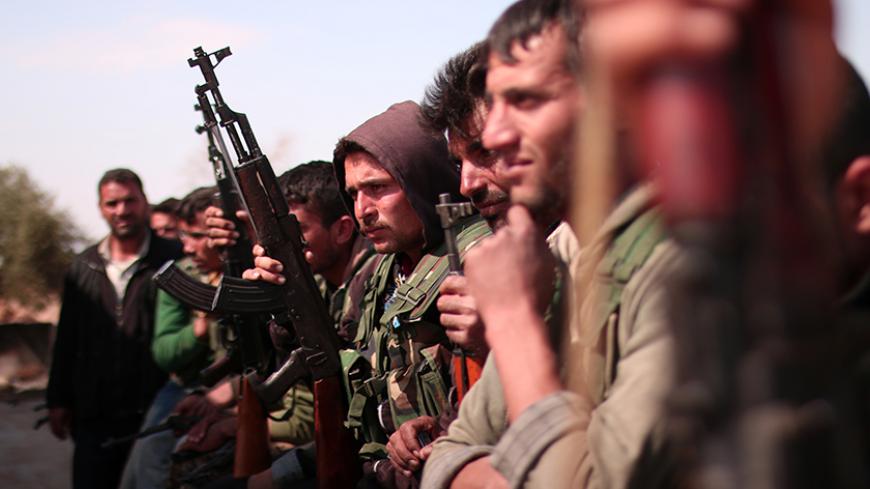 The long delayed battle to capture Raqqa is imminent after the United States formally announced that it has begun to arm the Syrian Kurdish People’s Protection Units (YPG), the coalition’s premier ally in the war against the Islamic State in Syria.

An official from the Syrian Defense Forces (SDF), the umbrella group that brings together the YPG and its Arab allies from the Syrian Arab Coalition (SAC), told Al-Monitor that the offensive will begin in the coming weeks. “It's unlikely, but … maybe even tomorrow [June 2],” the SDF official said.

The noose around Raqqa, the capital of the IS “caliphate,” has been tightening as thousands of YPG and Arab fighters advised by US special operations forces have encircled it from the north, the west and the east. They have now pushed to within about 2 miles of the mainly Arab city where IS will likely put up fierce resistance, as it has in Mosul in neighboring Iraq.

One of the biggest decisions is how much of a physical US presence will be necessary to ensure that the battle is won and swiftly. Nicholas A. Heras, a Bacevich fellow at the Center for a New American Security, told Al-Monitor, “The coalition is asking a militia force with airpower to seize a city that is likely to be heavily contested by IS. That reality will demand a more hands-on US and coalition partner military presence with the SDF/SAC, and will put the coalition advisers on or near the frontlines.”

The liberation of Raqqa is already being touted as a huge strategic and moral victory against the militants, though some coalition officials air doubts about how decisive it will be. “It's more like whack-a-mole — [IS] will keep moving elsewhere,” an official speaking on strict condition of anonymity told Al-Monitor.

Some analysts closely monitoring the conflict agree that the offensive is nigh. Aaron Stein, a senior fellow at the Atlantic Council, told Al-Monitor, “It’s time to go. The US has been planning this operation for well over a year but politics bogged down the start of it.”

Stein was referring to Turkey, a critical coalition ally, and its unremitting objections to the United States arming the YPG. Turkey insists that the YPG poses a threat to its national security because of the group’s tight links to the Kurdistan Workers Party (PKK), a Kurdish militia that has been fighting since 1984 for self-rule inside Turkey.

The United States finally decided to take the leap, however, and last month President Donald Trump signed a waiver authorizing the Pentagon to directly arm the YPG only days before meeting with Turkish President Recep Tayyip Erdogan in Washington.

A US military spokesman in Baghdad confirmed that the US-led coalition has begun issuing arms and other equipment to the YPG. The New York Times reported that they have included small arms, ammunition, heavy machine guns and anti-tank weapons to use against heavily armed vehicle-borne improvised explosive devices, or VBIEDs.

In sharp contrast to its earlier bluster, Ankara’s reaction has been one of resentful resignation punctuated by the occasional anti-American squawk. Veiled threats to rescind coalition access to the Incirlik Air Base have all but evaporated. And Turkey’s lethal April 25 airstrike on YPG positions inside northern Syria that endangered US special forces in the area seems, in hindsight, to have been more of a one-off aimed at massaging nationalist domestic sensibilities.

Still, Stein reckons that Turkish pressure made a difference in the equipment that is being provided to the YPG. Referring to anti-tank guided missiles, or ATGMs, Stein noted, “It looks like the SDF has been given ATGMs that can’t kill Turkish tanks but will be able to take out IS VBIEDs.” He added, “US special operations forces are also in the area and pictures suggest that they have the Javelin missile, so the US and YPG could be splitting ATGM duties.” The Javelin is a US-made portable ATGM. The United States has pledged to track all the equipment it is providing to the YPG and to halt deliveries if they wind up in PKK hands or are used to target Turkey.

A recent assertion by Jonathan Cohen, the deputy assistant secretary of state for Turkey, Cyprus and Greece, that the US alliance with the YPG is “temporary, transactional and tactical” will have also helped to ease Turkish jitters. While US officials have offered similar assurances behind closed doors, his words marked the first time any administration bigwig has defined the US-Kurdish relationship in quite such stark terms. Speaking at a panel organized by the Middle East Institute a day after Erdogan’s May 16 encounter with Trump, Cohen said, “We’ve not promised the YPG anything.”

His remarks had a cold-shower effect on the Syrian Kurds, who are demanding that their military prowess be rewarded with US recognition of their self-declared Democratic Federation of Northern Syria. The Syrian Kurds demand to know what comes post-Raqqa and what they will get out of all this. They're are not getting any clear answers from the United States, a member of the federation assembly told Al-Monitor on condition anonymity.

“This is a major question and is driving debates within the US government as we speak,” said Stein. “This question is more important, I would argue, than Raqqa. Raqqa will fall. But what comes after will drive the agenda for US-Turkey [relations] long after the weapons flows [to the YPG] stops.”