Who will liberate Raqqa?

The United States says a military operation to isolate the Islamic State stronghold of Raqqa needs to get underway within weeks, but Turkey as well as Washington’s Syrian Arab allies oppose any plan to use Kurdish forces to take the city. 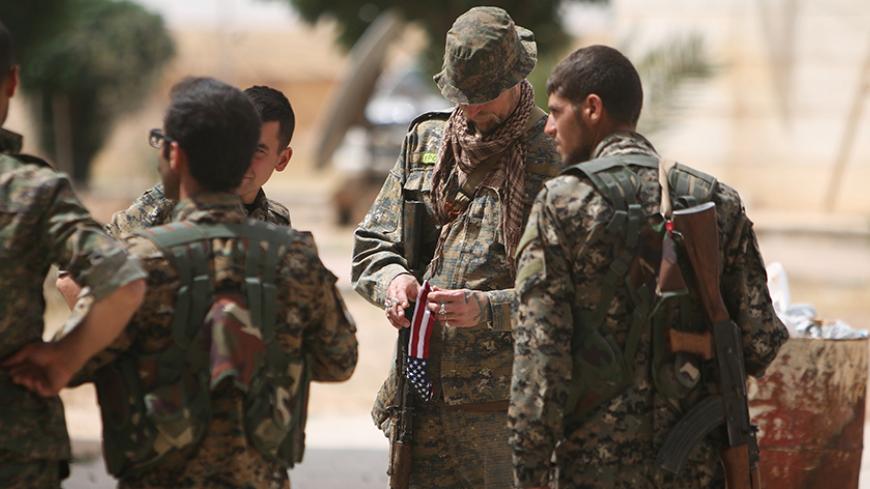 A US fighter, who is fighting alongside the Syrian Democratic Forces (SDF), carries his national flag as he stands with SDF fighters in the northern province of Raqqa, Syria, May 27, 2016. - REUTERS/Rodi Said

WASHINGTON — US military officials say an operation to isolate the Islamic State-held city of Raqqa should get underway within weeks, warning that intelligence shows planning is taking place there for external terror attacks. The officials said the only capable local force to work with in such an operation in the near term is the Kurdish-majority Syrian Democratic Forces (SDF). But the officials acknowledged that intense consultations with Turkey in recent days, including a phone call between US President Barack Obama and Turkish President Recep Tayyip Erdogan on Oct. 26, had not resolved the matter of Turkey’s intense opposition to using Kurds in any operation to take the IS stronghold in Syria.

“We think there's an imperative to get isolation in place around Raqqa because our intelligence feeds tell us that there is significant external operations attacks planning going on, emanating … centralized in Raqqa,” the top US commander in Iraq and Syria, Lt. Gen. Stephen Townsend, told journalists in a satellite press briefing from Iraq on Oct. 26.

But Ankara was at odds with the plan, Townsend acknowledged.

“So, how are we going to thread that needle with Raqqa, with the SDF and our NATO allies, Turkey?” Townsend asked.

“Turkey doesn't want to see us operating with the SDF anywhere, particularly in Raqqa,” Townsend said. “So, the facts are these. The only force that is capable on any … near-term timeline … are the Syrian Democratic Forces, of which the YPG [People's Protection Units] are a significant portion. So, we're negotiating, we're planning, we're having talks with Turkey and we're gonna take this in steps.”

US officials suggested that they would need to rely on Kurdish forces and the SDF for the next phase of isolating Raqqa, but are stepping up recruitment of Arab forces for the subsequent phase of taking the city from IS.

US Secretary of Defense Ash Carter, speaking to reporters in Brussels after meeting with his French and Turkish counterparts on the sidelines of a NATO meeting on Oct. 26, effusively praised Turkish Defense Minister Fikri Isik, but acknowledged that no new arrangement had been finalized yet.

“We didn't conclude any new arrangements, but we continued these … very important discussions with a very good partner,” Carter said. “So we all want to keep [IS] under sustained pressure — that's the key — and defeat it in both Iraq and Syria, and everybody shares that objective.”

As to when the operation against Raqqa would get underway, Carter would only say “weeks. I can't be more specific than that.”

“We know what we’re doing,” Carter continued. “We’re going to execute to that plan. And that plan has us generating those forces in a matter of weeks. … Generating them, and positioning them for the isolation of Raqqa.”

Bassam Barabandi, a former Syrian diplomat now with the Syrian opposition High Negotiating Committee, said it has told the US administration it is important for the long-term success of any operation to take Raqqa that it be conducted by Syrian Arab forces, not Kurds.

He said, “The SDF will not be involved in any of the daily fight, rather they could be advisory, provide support, far away from the city. The administration said they like the idea, but their argument is, it is very difficult to create a new body now, and we will go with what they have.”

He added, “We told them, Raqqa is a small city, it will be the first [major] American operation in Syria on the ground, and we need it to be a success story. That would be good for Syria, the revolution, everybody. The way the Americans are thinking so far will make it a very tragic story.”

The Americans told the Turks that no Islamist group will be allowed to participate in the Raqqa operation, because Ahrar al-Sham and Jabhat al-Nusra had previously held Raqqa and gave it up to IS, Barabandi said. Turkey said the SDF and Kurds are a red line, and from their perspective, the only way to go forward is to have a major Arab force to do the job.

Erdogan repeated that view Oct. 27, saying he had told Obama as much in their phone call Oct. 26.

"We do not need terrorist organizations like the PYD/YPG,” Erdogan said he had told Obama in their phone call. “I said, 'Come, let's remove [IS] from Raqqa together. We will sort this out together with you.' We have the strength.”

The SDF is also wary of providing up to two-thirds of its 25,000-strong forces for the operation to isolate Raqqa, leaving smaller numbers to defend against potential Turkish attacks on cities it is holding in other parts of Syria, said Aaron Stein, a Turkey expert with the Atlantic Council.

“The US wants Raqqa because … that is where it [IS] plans external operations,” Stein said. “If the mission is to degrade and destroy IS, they need to push it out of there, so it is more difficult to plan external attacks.”

“My guess, they [US-led coalition] will do what they did in Manbij, set up a military council ostensibly run by Arabs,” Stein said. “But it’s a fig leaf. The US did not keep their promise to the Turks. Manbij still has the YPG in it. Switching their patches, thrusting a few Arabs in, does not cut it.”

“The SDF does not actually exist,” Stein said. “It is a made-up name given to the YPG. The SDF doesn’t function without the YPG. It is the complete backbone.”

“But the difference is, compared to the rest of Syria, the YPG is completely homogenous, with one command structure,” Stein said. “It is ideal for the way the US fights wars, it is not hostile to the US, [they] don’t have to worry about the YPG kidnapping US troops,” as it does with some elements in Arab rebel groups.

“I told them, ‘Syria is Arab,’” Barabandi said. “So it is difficult you don’t see Arabs.”