US allies mobilize on two fronts against IS, but Sunnis wary

US-backed Iraqi forces have encircled Fallujah, and mostly Kurdish Syrian Democratic Forces have advanced on villages north of Raqqa, but Sunni residents are terrified of retribution by Kurdish and Shiite local forces preparing to liberate those cities from the Islamic State. 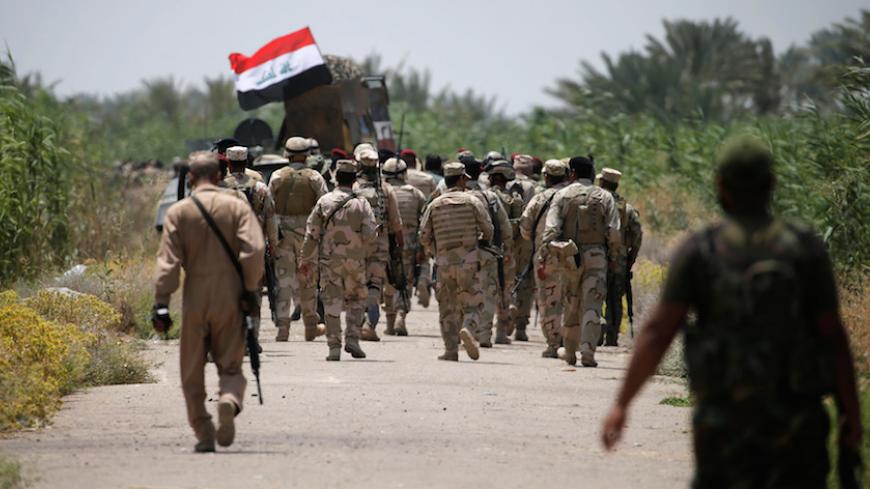 WASHINGTON — As US-backed Iraqi security forces and allied militias have encircled the Islamic State (IS)-held city of Fallujah, Iraq, and mostly Kurdish Syrian Democratic Forces (SDF) have advanced into villages north of the IS stronghold of Raqqa, Syria, Sunni residents of both cities have expressed fear at the prospect of violent retribution by the mostly Shiite and Kurdish forces moving toward them.

Officials with the US-led coalition have cheered progress made to seize territory from IS in recent days, dropping leaflets over the weekend into Raqqa telling civilians it’s time to leave the city and taunting IS over a May 21 audiotape by its spokesman acknowledging setbacks. Accompanied by a small group of reporters, Gen. Joseph Votel, who leads US Central Command (Centcom), even secretly crossed into northern Syria on May 21 to meet with the SDF as the fighters prepared to move toward the IS stronghold of Raqqa.

“While [IS] leaders are reduced to audiotapes in the dark, Centcom commander Gen. Votel was in Syria preparing [the] push to Raqqa,” Brett McGurk, President Obama’s special envoy for the Global Coalition to Counter IS, wrote on Twitter on May 21.

US officials have said the Fallujah operation is more about tackling the terrorist threat to Baghdad, while the Kurdish/SDF push on Raqqa is about isolating the city, but not going in and clearing it, at this time.

“In response to your question about Raqqa, we do continue to work and support the efforts of the Syrian Democratic Forces to retake territory from [IS] and further isolate its transportation, communications, supply routes into Raqqa in order to really choke off their hold on that city,” State Department deputy spokesman Mark Toner told journalists at the State Department press briefing May 24.

But as US officials have expressed growing confidence in the trajectory of their campaign against IS, and coalition-backed local forces have advanced on Fallujah and Raqqa, Sunni residents have expressed growing alarm and trepidation about the prospect of violent retribution from the mostly Shiite and Kurdish local militias that have mobilized to encircle them, after years of civil war have exacerbated sectarian tensions and mistrust.

In a sign of the scope of concern about potential sectarian violence in the coming campaigns, Iraq’s top Shiite religious leader, Grand Ayatollah Ali al-Sistani, issued an appeal May 25 to spare civilians and conduct war ethically.

"Sistani reaffirms his recommendations that the ethics of jihad (Islamic holy war or struggle) be respected," Sistani’s representative, Sheikh Abdul Mahdi al-Karbalai, said in a statement May 25, Reuters reported. "Don't be extreme … don't be treacherous. Don't kill an old man, nor a boy, nor a woman. Don't cut a tree unless you have to," Sistani’s representative continued, quoting sayings of the Prophet Muhammad.

Raqqa residents were also frightened after the US-led coalition dropped leaflets on the city telling them it was time to leave the city and mostly Kurdish SDF forces advanced to villages north of the IS stronghold.

The group Raqqa is Being Slaughtered Silently posted on Twitter on May 24: There is “too much fear among civilians in Raqqa because of the SDF advance toward Raqqa.”

“People in Raqqa in general don’t want SDF to take Raqqa city, people are not welcoming them,” they wrote. “More than 700,000 civilians in Raqqa City center don’t know where to go if the battle for the city start.”

While Sistani and SDF official statements may be conciliatory, there are YouTube videos by Iran-affiliated Shiite militias that portray the Sunni residents of Fallujah as complicit with IS and urging their fighters to seek retribution, Bassam Barabandi, a former Syrian diplomat turned opposition activist, told Al-Monitor.

“It is really scary,” Barabandi told Al-Monitor on May 25. On the videos, “they are talking about, 'No Sunni in Fallujah is good. All of them should be killed.'”

“It makes it very complicated,” Barabandi said. “Most [Sunni residents of Fallujah] want to run away from [IS], want to fight [IS]. But the people coming to liberate them say they are going to kill you. … And [there is] the same problem with the Kurdish SDF talking about liberating Raqqa. ... What they are talking about, the way they behave against Arabs, doesn’t give confidence they are the right people to liberate” the predominantly Sunni Arab city.

The solution is to bring more Sunni Arab units into the SDF — which he estimated to be a maximum of 10% Sunni Arab at this point — so they can be the ones to go into Raqqa city to liberate it, Barabandi suggested.

“What we are trying to tell [the Americans] … is that everybody is united against [IS]. Everybody wants to be involved in this fight and wants to finish from this,” Barabandi said. “We hope that the US uses its leverage to empower Arab Sunnis to participate in this fight. It will make it easier for everybody.”

“There is a small force already vetted by the US in this geographical area — the New Syrian Army. It is very small, [and has done] some special operations with US help,” Barabandi said. “Empower them, encourage more Arab Sunnis to join them. … That is the easy way to encourage them. So many people from Raqqa, Deir ez-Zor … want to participate [in the fight against IS], but they don’t have the contacts with the Americans to do that.”

“The more you use them, the more things will be easy,” Barabandi said. “People living in the city [Raqqa] will see the people who come are their cousins and relatives. Work with them to keep more cooperation.”

In an apparent effort to alleviate the reported anxiety of Raqqa’s residents, the SDF, after announcing the start of their campaign to advance on the countryside north of Raqqa on May 24, said May 25 it was not planning to imminently move on Raqqa city.

"The campaign is aimed at repelling terrorist attacks on Shadadi, Tell Abyad and Kobani, ensuring the security of our people," SDF commander Rojda Felat was cited on the group’s official Twitter account, adding that what he called the Raqqa Liberation Brigade would be accompanied by members of the international coalition.