In an interview with Al-Monitor, Kurdish commander Rojda Felat, one of the leaders in the battle to retake Raqqa, shares her experience as a female fighter against the Islamic State. 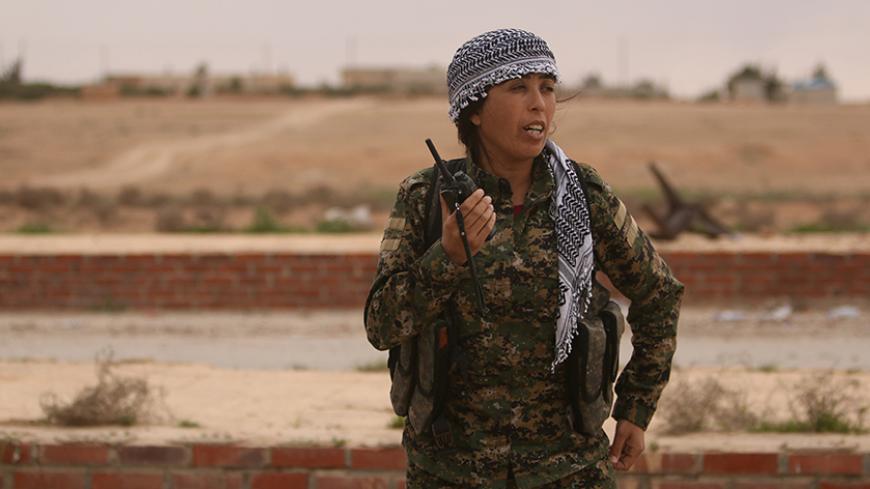 Rojda Felat, the commander of a US-backed operation by Kurdish and Arab fighters to capture the Syrian city of Raqqa, uses a walkie-talkie near the Tabqa Dam, west of Raqqa, Syria, March 30, 2017. - REUTERS/Rodi Said

Rojda Felat, one of the top commanders of the Women's Protection Units (YPJ) who fought groups like Jabhat al-Nusra at Ras al-Ain in 2012 and IS in Kobani, is now one of the leaders of a major campaign against IS — Operation Wrath of the Euphrates in northern Raqqa. The operation is headed by the People’s Protection Units (YPG), the YPJ and the Syrian Democratic Forces (SDF) with the support of the United States. The inclusion of female fighters is an intentional response to IS members' fear of being killed by women because that would prevent them from entering paradise.

In the city of Tabqa, west of Raqqa, Al-Monitor interviewed Felat about the battle in northern Syria to retake Raqqa, ongoing since November 2016. The text of the interview, edited for clarity, follows:

Al-Monitor:  How did you get to this position? Why was a woman chosen to lead Operation Wrath of the Euphrates? Did you face difficulties when you took the position because you were a woman?

Felat:  I have never had any problems. In the YPG, there is no difference between women and men, and both sexes can direct campaigns and lead. There are several reasons I was chosen as the leader of the operation, including my experience in previous campaigns against IS, such as the campaigns of Tal Hamis, Hasakah, Tell Abyad and Suluk, among others. The main reason I was selected is that IS members said that they fear being killed by women as that would prevent them from entering paradise. So I was appointed to show them that women can lead forces such as the SDF, and that they will avenge women who have suffered a grave injustice as a result of IS’ practices.

Al-Monitor:  How do you describe the role of the SDF today in northern Raqqa? What is the secret of your success?

Felat:  The forces that are actually fighting and advancing on the ground are our forces, the SDF. They are fighting and directly confronting IS. These forces include residents of the area who want to liberate their own areas. The coalition forces, such as the United States, British, French and other forces, have also played a role in advancing our forces as they supported us with heavy weapons and ammunition, and we cannot deny their role in helping our forces advance. The more we move toward the city of Raqqa, the more support we get.

Al-Monitor:  Some opposition figures accuse you of seeking to bring about demographic change in the region. What is your take on this? And how do you deal with civilians on the ground?

Felat:  The population in this region knows that we came neither to stay nor to impose our control. We are only here to liberate the region and protect our defenseless people from IS. In all of the areas we liberate, a local council is formed to manage the liberated cities, and the military forces never stay in the cities. Had we been treating the population poorly, we would not have seen thousands joining the ranks of the SDF only a few days after the liberation of some areas.

Al-Monitor:  The distance separating you from the dam at Tabqa was very short. Did you expect IS to carry out its threat to destroy the dam, which could destroy entire cities such as Deir ez-Zor and Raqqa as well as Anbar in Iraq?

Felat:  This dam is one of the largest dams in Syria, and its location is sensitive. We conducted its liberation operation [on May 10] in a very sensitive way. We did not attack the dam or the nearby areas, nor did we bomb them. IS was threatening to destroy it, and it resorted to many methods such as mines and car bombs. Had we not conducted the liberation operation with such sensitivity, IS would have destroyed it already and a humanitarian disaster would have taken place. But it is thanks to our sensitive treatment of the matter that we managed to encircle IS members and force them to move away from the dam, despite some attempts to sabotage it.

Al-Monitor:  You liberated Tabqa on May 10. What did you expect from IS?

Felat:  IS made it a point to intimidate civilians even after its departure. It planted mines everywhere. We had expected this — it planted so many mines in Tabqa because it had nothing else to confront our forces with. It relies on mines at some times and on car bombs at others. We will try to tread with great caution so that not many civilians will lose their lives as a result of IS’ terrorist acts.

Al-Monitor:  What will happen after the liberation of Raqqa?

Felat:  Raqqa is a strategic center for IS, and the organization considers the city its capital. IS has put all the civilians it arrested and abducted from other regions in Raqqa. We know that the liberation of Raqqa will be a tough task, but our forces are ready. We will encircle IS members in the city. Just like we won in Tabqa, we will win in Raqqa. We know that IS will use all its ways, like booby-trapped vehicles, snipers and other means, to defeat us. But we also know how to foil these tactics. The US support for our forces will expedite our advancement to Raqqa and its liberation. I do not think many civilians will help IS. When we liberated the [Tabqa dam] civilians ran away to us. After all the injustice they faced, from murder to slaughter from IS, not many will help the organization unless they are IS supporters who came from foreign countries or they were forced into joining the organization.

Al-Monitor:  How are you taking care of civilians under these tough circumstances? Which parties are helping you?

Felat:  In our battles with all factions like Jabhat Fatah al-Sham, Ahrar al-Sham and finally IS, we are freeing civilians first then taking them to safe zones and camps. But in Tabqa, we kept them close so that they could see the difficulties we face. We do not have enough support from humanitarian organizations to provide for the civilians who are freed. We are trying to help them ourselves. Only our organizations from Kobani and Jazira offered help to civilians.

Al-Monitor:  What are the possible situations to prepare for in Raqqa? How will the Arab component in that region be treated? Will you head to Deir ez-Zor and Idlib next?

Felat:  The liberation of Tabqa was key to an imminent liberation of Raqqa. We promised to fight IS wherever it is in Syria. The SDF, the YPG and the YPJ, if needed, will destroy IS. We will advance to Deir ez-Zor and Idlib and even to the Mediterranean Sea. We are ready and well prepared. The fourth stage of Operation Wrath of the Euphrates is ongoing from Tabqa, the borders of Deir ez-Zor and the north of Raqqa. Our forces need to rest after having liberated Tabqa, which was key to liberating Raqqa completely.

We are trying our best, and we hope to succeed in Raqqa soon. We are removing mines from liberated areas so that civilians can return home. We are also providing their daily needs like food, and we are establishing a Tabqa civilian council. Recently, there was a lapse in supplying citizens with their basic needs, but it was due to scarce capacities and ongoing battles. We also did not receive enough aid from international relief organizations like the UN. There has been some improvement in this regard, and we are now trying to meet all civilians’ needs.

Battles are still raging in the northern Raqqa countryside with the advancement of the international coalition forces and the SDF to the city. We expect a catastrophe in the city because IS is detaining civilians and not letting them escape the conflict zones. Many might die because the organization is turning them into human shields.