Turkey angry, stoic with US decision to arm Syrian Kurds

Will US-Turkish relations worsen in the wake of the Trump administration’s historic decision to directly arm Syrian Kurds? 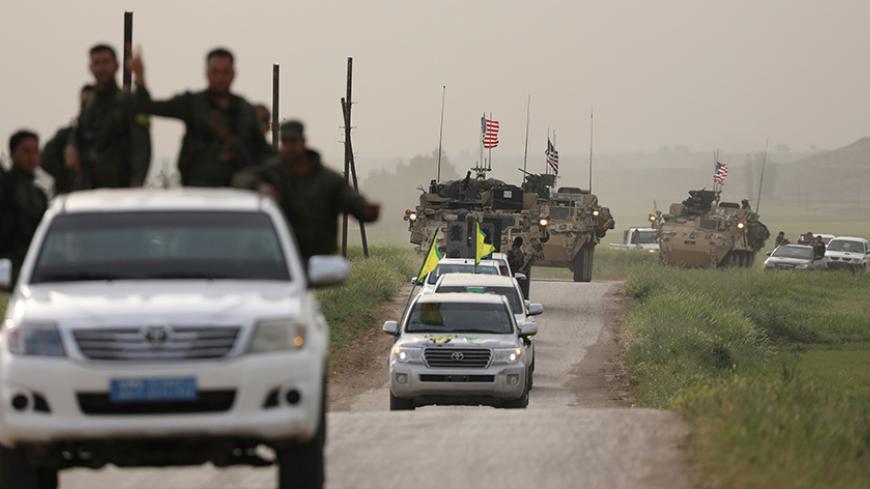 Kurdish fighters from the People's Protection Units head a convoy of US military vehicles in the town of Darbasiya, Syria, April 28, 2017. - REUTERS/Rodi Said

US President Donald Trump’s May 8 decision to directly arm the Syrian Kurdish People’s Protection Units (YPG) against the Islamic State did not surprise anyone. If anything, the United States stated what it had been doing for some time.

Since the United States began conducting airstrikes against IS in August 2014 and the US Congress passed legislation to train and equip Syrian Kurds in December 2014, the YPG and YPG-led Syrian Democratic Forces (SDF) have fought against IS with great success. Thanks to US support, the SDF has reversed the territorial gains of the extremist Sunni group and, since spring 2016, has been marching toward IS’ capital, Raqqa.

Indeed, as Al-Monitor’s Fehim Tastekin noted in May 2016, the US partnership with Syrian Kurds to liberate Raqqa from IS has been going on for quite some time. But this situation has long angered America’s erstwhile ally, Turkey. Ankara possesses the second-largest military in NATO and considers the YPG an offshoot of the Kurdistan Workers Party (PKK), which both Ankara and Washington consider a terrorist organization.

Interestingly, so far, the Turkish response to the Trump administration’s decision has been tough but reasonable, at least considering that Turkish President Recep Tayyip Erdogan had lashed out against the United States and its Western partners for “supporting terrorists in Syria” in December 2016.

Answering journalists’ questions in Ankara May 10, Turkish Foreign Minister Mevlut Cavusoglu said, “The YPG and the PKK are the same, there is no difference. Every weapon they get their hands on is a threat to Turkey.” Cavusoglu added that because Raqqa is a “99% Sunni Arab city, it would be appropriate for Arab [forces] to enter Raqqa.” Meanwhile, Turkish Defense Minister Fikri Isik called the US decision to arm the YPG “a crisis in its own right,” and claimed that the operation to liberate Raqqa would go more smoothly if the YPG were withdrawn and the Turkey-backed Free Syrian Army units took charge of defeating IS.

In fact, several Turkish columnists sympathetic to the Erdogan government have argued that the Turkish military’s April 25 airstrikes against YPG and PKK positions in northern Syria and northern Iraq deliberately aimed to undermine the US-YPG partnership and the YPG-SDF offensive against Raqqa.

Lisel Hintz, a visiting assistant professor of political science at Barnard College, Columbia University, told Al-Monitor that the US side was waiting for the Turkish referendum to be over so as not to corner Ankara. Hintz said, “The general attitude [in Washington] towards the US arming of the YPG as part of the [SDF] … was pragmatic and refreshingly unpolitical. Formalizing a policy supported by President [Barack] Obama and recommended by [Trump’s national security adviser] Lt. Gen. H. R. McMaster, who is highly respected in the military and has strong bipartisan approval, providing support to accomplished Kurdish forces is regarded as the most effective way to combat [IS] in Raqqa without risking US lives.”

Although Ankara had braced itself for the Trump administration’s announcement, that it came out while a high-level Turkish delegation was visiting Washington angered Ankara.

Hintz suggested that the timing of the announcement may have been deliberate. “The fact that the decision to do so was announced to Turkish officials including Chief of General Staff Hulusi Akar, head of national intelligence Hakan Fidan and presidential spokesman Ibrahim Kalin before they could even make their case against [the decision to directly arm the YPG] indicates that US leaders are pushing back against a Turkey that has been able to leverage its geopolitical role for its own gain in the recent past, including squeezing the EU on the refugee crisis.”

So what does the future hold for US-Turkish relations in the wake of the historic decision to arm groups that the Americans consider allies against IS and the Turks equate with IS and the PKK? As Al-Monitor’s Semih Idiz reported May 9, Erdogan’s May 16 visit to Washington, where the Turkish president will meet his American counterpart, is likely to fail. Many of the outstanding issues in US-Turkish ties will remain unresolved.

Now, the million-dollar question is whether Ankara will make any moves to weaken the YPG-SDF offensive (as it did with the April 25 airstrikes), or wait out the United States, which has a habit of prematurely withdrawing from Middle Eastern conflicts and a history of abandoning Kurds?

And will Syrian Kurds overplay their hands and demand more than their battlefield gains, such as an opening to the Mediterranean?