The Turkish foreign minister shared a heated conversation with his American counterpart in the wake of the Turkish airstrikes in Syria, and despite US fury, Ankara's increasingly roguish behavior will likely remain unchanged. 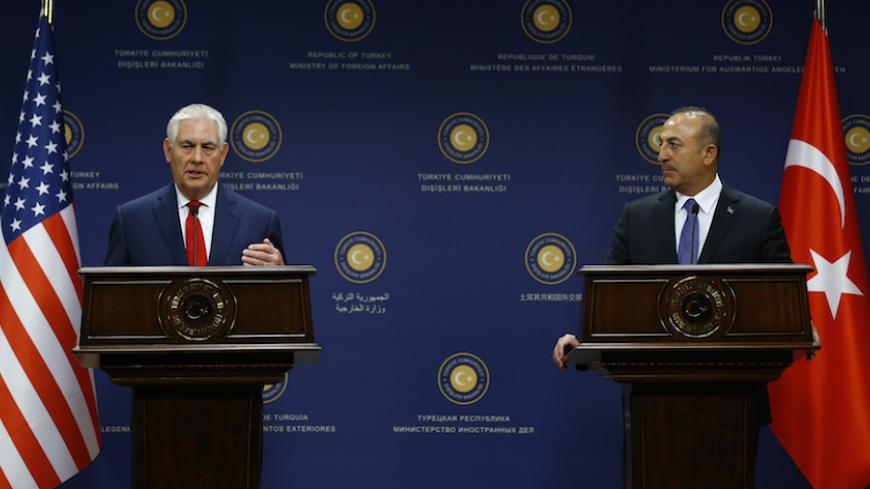 Soon after Turkish air force jets carried out a wave of airstrikes against Kurdish targets in northeastern Syria and northwestern Iraq on April 25, Turkish Foreign Minister Mevlut Cavusoglu spoke with US Secretary of State Rex Tillerson over the phone. The reported tone of the conversation speaks volumes about the new low in Turkish-American relations ahead of President Recep Tayyip Erdogan’s planned May 16 meeting with President Donald Trump.

According to three separate sources familiar with the details of the exchange, it went horribly. Cavusoglu’s shrilly defensive explanation of why Turkey had ignored US calls to back off and bombed the headquarters of the Syrian Kurdish People’s Protection Units (YPG) on Mount Karachok, killing 28 militants and endangering US special operations forces’ lives, didn’t cut any ice. One of the sources told Al-Monitor on condition of strict anonymity, “At one stage in the conversation Tillerson was kind of like saying 'OK, whatever, you go your way, we will go ours.'” Another said, “It wasn’t quite that dramatic,” but concurred that the phone call went badly.

Turkey’s top diplomat has a reputation for being very undiplomatic. Cavusoglu is brusque, aggressive and there is talk that he may soon be replaced. But according to the sources, Tillerson was the undiplomatic one this time. “Tillerson made no attempt to disguise his fury over the attacks. Cavusoglu didn’t get to say much,” one of the sources said. The Turkish military reportedly gave only 52 minutes' warning to coalition forces before carrying out the airstrikes, putting their lives at risk. The United States had troops in Syria within six miles of the strikes.

A coalition official told Al-Monitor on condition that he not be identified by name, “The Turks did not even provide specific coordinates for where they would be bombing. All they gave us was a box.” The lack of information was probably to prevent the coalition from tipping off the YPG so it could clear out in time.

Ibrahin Kalin, the presidential spokesman whose name is making the rounds as a potential replacement for Cavusoglu, is due to arrive in Washington May 8 for meetings with National Security Council and State Department officials to smooth the ground ahead of Erdogan’s trip.

The former academic, who also taught at Georgetown University, is together with Turkey’s spy chief Hakan Fidan the go-to people for Western officials when they want to get a message across or questions answered. Kalin is said to enjoy the backing of Erdogan’s younger son Bilal. But Berat Albayrak, the energy minister who is married to Erdogan’s elder daughter Esra, wants to be the foreign minister as well.

The head of the Turkish Armed Forces, Gen. Hulusi Akar, is also expected to hold talks in Washington before Erdogan’s arrival, presumably to persuade Pentagon officials to accept Turkey’s offer to partner with US forces in the long-planned operation to capture Raqqa, Al-Monitor has learned. He is unlikely to succeed.

To be sure, many analysts are voicing skepticism about the success of the Trump-Erdogan meeting. “Fundamental differences will remain unresolved,” said Gonul Tol, the executive director of the Middle East Institute’s Turkey program. Tol told Al-Monitor, “For as long as the United States and the Syrian Kurds are in partnership, relations between Ankara and Washington will by default remain rocky."

Tol added, "Turkish hopes that Trump would change course in Syria in Turkey’s favor were unrealistic from the start. Surprising as it may sound, the Trump administration is seriously alarmed by Turkey's rapid descent into authoritarianism and view it as an unreliable ally.”

Yet Turkey’s increasingly roguish behavior will likely remain unchanged. Asli Aydintasbas, a senior fellow at the European Council on Foreign Relations, told Al-Monitor in a telephone interview, “The airstrikes against the YPG were Erdogan’s way of being heard.” She added, “He is telling the Americans we can disrupt your plans, and he can."