Israeli Prime Minister Benjamin Netanyahu is promoting neither the two-state solution nor one state for the two people, but one state on Israeli and West Bank territories, only for the Jews. 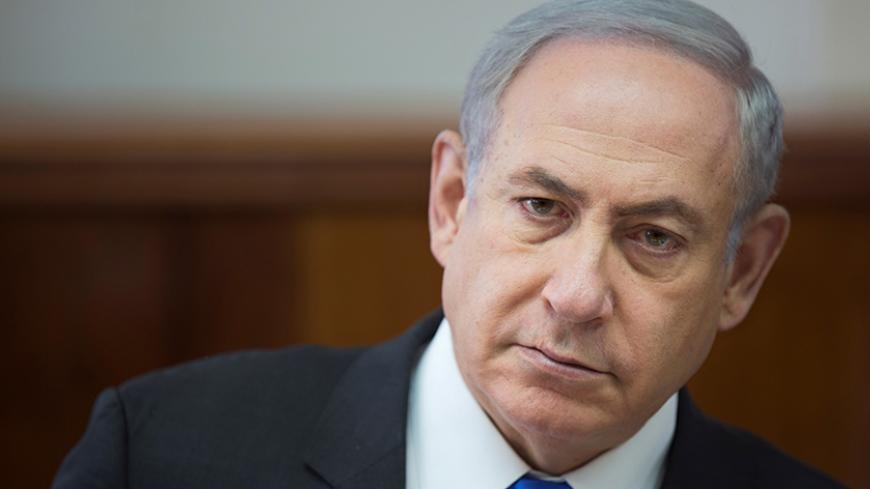 Ahead of his upcoming visit to Israel, US President Donald Trump should update the two options he presented at his joint Feb. 15 White House news conference with Israeli Prime Minister Benjamin Netanyahu. These were either two states for two people — one Jewish and one Palestinian, on the land between the Mediterranean Sea and the Jordan River (Israel’s territory together with the West Bank) — or one state for the two people on all this land.

As Education Minister Naftali Bennett said in an Al-Monitor interview with Ben Caspit on May 8: Trump must now be told the truth. So this is the truth: The option being promoted by Netanyahu and Bennett is one state for one people. One state for the Jewish people, between the Mediterranean and the Jordan River. As far as they are concerned, the Palestinians are not “a people” and never were “a people.” Therefore, they do not deserve a state. They should thank Israel for not expelling them from their homes and for even being willing to make “economic” peace with them.

The truth is that since 2009, when Netanyahu first spoke of a two-state solution in his landmark Bar-Ilan speech, more than 100,000 people have been added to the population of the Jewish people in Area C (under Israeli civil and security control) — the part of the West Bank intended for a future state of the Palestinian people. In 2009, there were about 300,000, now there are over 400,000. The truth is that out of Area C, which comprises some 60% of the West Bank, Israel has designated 36.5% as “state lands” — namely lands belonging to the State of Israel, of course. Some 63% of Area C is under the jurisdiction of the local and regional councils of Israeli settlements; some 30% is designated as Israel Defense Forces live-fire drill zones. The truth is that the Israeli authorities grant very few construction permits to Palestinians in the remaining areas, and treat with indifference the abuse of Palestinians by Jewish thugs in the illegal Israeli outposts.

The truth is that senior government ministers are promoting a legislative initiative designed to turn all the Jewish population between the Mediterranean and the Jordan River into one solid mass. No more Green Line (which delineated Israel from the West Bank until 1967), and no (virtual) red line of apartheid. According to this joint initiative by Justice Minister Ayelet Shaked (HaBayit HaYehudi) and Tourism Minister Yariv Levin (Likud), all Israeli legislation would apply to the West Bank, too. Needless to say, they don’t mean that it would apply to the Palestinian majority living there, but to settlers.

From the explanations furnished by Levin, one of Netanyahu’s closest allies, it appears that the proposed bill leaves the Palestinians with only three options: living forever under foreign occupation, emigration or expulsion. Levin said with no trace of ambiguity, “The settlement of Judea and Samaria is a fait accompli. … The measure we are leading will put an end to the blatant discrimination and the disregard by the laws of the State of Israel against the regions of the homeland and the Israeli citizens living there.”

In other words, one could say that the move that Shaked and Levin are promoting will offer a juridical stamp of approval (not a legal one, as the settlement enterprise is contradictory to international law) to clear discrimination and to Israel's ignoring the human rights of 2.5 million West Bank Palestinians. Such a policy has a name: Apartheid.

The Shaked-Levin initiative is a direct sequel to the regularization law, which enables the Jewish people to expropriate Palestinian land rights in the area intended for a sovereign state of the Palestinian people. In a Feb. 6 Knesset debate, Science Minister Ofir Akunis (Likud) responded to critics of that bill by saying, “We are voting on the link between the Jewish people and its land. Fortunately, the public places its trust in us and not in you, which also means that it believes the Land of Israel belongs to the people of Israel.”

Akunis and his government colleagues keep coming up with new laws designed to silence opponents of apartheid in the territories or, euphemistically speaking, of the solution calling for one state for one people.

The political right does not want the public to know what this “belonging” of the land of Israel to the people of Israel, as Akunis described it, looks like — a "belonging" that is actually conducted through military occupation, banishment and violation of international law. Proponents of the two-state solution, such as Peace Now, B’Tselem and Breaking the Silence, impede the political right's efforts to present Israel as a victim of the Arabs. As far as the Israeli right is concerned, Israel is not an occupier, but a victim, while the Palestinians dare act against it in international fora, such as the international soccer body FIFA. The Israeli government sees nothing wrong in having the soccer clubs of settlements located outside Israel's sovereign borders included in its national soccer league.

President Reuven Rivlin took the opportunity during his May 7 meeting with German President Frank-Walter Steinmeier to protest UNESCO’s criticism of the Israeli occupation of Palestinian territories. Rivlin repeated HaBayit HaYehudi leader Bennett’s mantra that “a nation cannot be a conqueror in its own land.” But unlike Bennett, the president advocates full equality for all Israeli citizens, regardless of religion, race or nationality. Nonetheless, this week the ministerial Legislative Committee voted in favor of the proposed nationality law, which even gained preliminary Knesset approval, granting priority to the Jewish people — the one who “is not a conqueror” in its own land — over the non-Jewish people living in its state.

Zionist Camp Knesset member Erel Margalit said in response to the ministers’ approval of the nationality law, “A government that is afraid to determine the country’s borders is not entitled to determine its nature.” The truth is that the government is not afraid to draw the state borders. But instead of deciding them in a diplomatic agreement, it does so by establishing facts in the occupied territories. And it does so by endless deception. On the one hand, the prime minister implores the Palestinians to return to the negotiating table, and on the other, he advances the nationality law, explaining that he has to “ensure the future of the people of Israel in the Land of Israel.” Pay attention: “Land of Israel,” not “State of Israel.” Sometimes he says that in the foreseeable future it appears that Israel must control all the territories and promises that it will forever live on its sword, and other times he accuses the leadership of the Palestinian people of incitement to violence against Israel.

The next time Trump meets Netanyahu, he must demand that the prime minister present the government and the Knesset with a proposed resolution saying that the government of Israel “commits to promoting the establishment of a state for the Palestinian people based on the 1967 borders. Until then, it will freeze all construction in the Israeli settlements.” At the end of their previous meeting, Trump said that unlike his predecessors at the White House, he believes a deal can be made between Israel and the Palestinians. Such a resolution is essential for a true regional peace deal. And as Bennett said, Americans like those who tell the truth.