Justice Minister Ayelet Shaked has scored a victory in the ongoing campaign of the Israeli right to gain control over the Supreme Court. 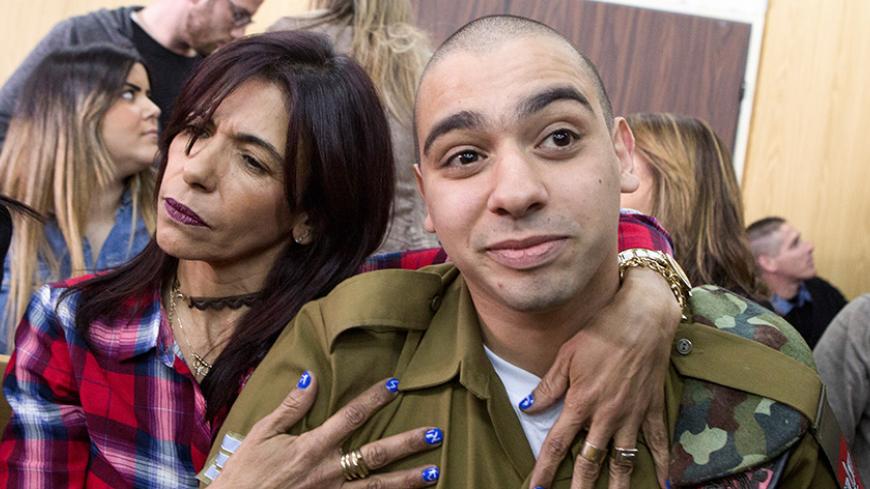 Israeli soldier Elor Azaria is embraced by his mother at the start of his sentencing hearing at a military court in Tel Aviv, Feb. 21, 2017. - REUTERS/Jim Hollander

The shocking video of an Israeli soldier executing a wounded man lying prostrate on the ground in the West Bank city of Hebron last March threatened to do irreparable damage to the “enlightened conqueror” image that Israel tries so hard to present to the world. That damage pales in comparison, however, to the deep cracks left in the pillars of Israeli democracy by the affair of the “shooting soldier,” Elor Azaria. In a somewhat ironic coincidence, on the day after Azaria's court martial sentencing, the state’s Judicial Appointments Committee on Feb. 22 appointed four new justices to the Supreme Court. Since the founding of the state, never have the prospects for justices' appointments depended so heavily on the similarity between their political views and those of the sitting government. Indeed, three of the four justices selected by the committee are considered conservatives.

When I was young, we were taught that the court was a place where people went to get justice. We were told that the judicial and enforcement arms of government, which also includes prosecutors and police, were equipped with the best possible tools for protecting the values of morality, equality and compassion. The most cherished tool among them was said to be public trust in the integrity of judges and their ability to render justice impartially. Indeed, it is incumbent on an enlightened state to maintain a system of checks and balances through its various courts and judicial panels.

What is a school child to think, then, about the reaction of the education minister, Naftali Bennett, to the verdict rendered in the trial of the soldier convicted of manslaughter for killing an unarmed, injured assailant — to wit, “The investigation process was basically contaminated”? How will a teacher respond to a student who asks about Culture and Sports Minister Miri Regev's charge that the Azaria verdict was a “direct outcome of the summary justice” meted out to the soldier from the start? Is it possible that the three judges who sat in judgment of the soldier did not base their rulings on the laws of evidence, natural law and the particular circumstances of the event? Given such views, there are two possibilities to explain the judges' action from the perspective of the right, which claims Azaria is innocent and is demanding that his 18-month jail sentence be commuted even though it is a more lenient punishment than the ones meted out to Palestinians who throw stones at Israelis.

One possibility is that the military police, the military prosecutors and the judges conspired to convict a “brave soldier.” Their contention, however, that Azaria shot Abdul Fatah al-Sharif because “he deserved to die,” to quote the soldier, is a despicable plot not supported by the facts. The second possibility is that the judges in their verdict veered from the customary norms of the Israeli military when they wrote, “The use of force for reasons other than a defined mission, involving the taking of a human life, even that of a terrorist, is unacceptable.” In keeping with that possibility, there was also no reason for the judges to write, “Respect for human rights and the safeguarding of human dignity, even that of an enemy, are embedded in the character of the state as a Jewish and democratic state.”

The Azaria affair teaches young Israelis not yet conscripted that they are entitled to execute a Palestinian who is no threat to anyone. In the worst case, they will become “everyone’s child,” as Azaria was described by many, get a lighter sentence than a Palestinian suspected of a minor infraction even when no one gets hurt and compile an album of Facebook posts by ministers demanding that they be pardoned immediately. Even Isaac Herzog, chairman of the opposition, called Azaria a “victim of the situation … since you cannot ignore the circumstances of the incident, which reflect an impossible reality in a field that is complicated.”

Indeed, for 50 years now, Israeli soldiers as well as citizens have been victims of circumstances stemming from their country’s occupation of another people. That includes the years in which Herzog’s center-left camp and that of his predecessors held power. Barring unexpected surprises, these circumstances will exist for decades. The current victim of these circumstances is the Supreme Court, the most powerful and important legal body in Israel. Justice Minister Ayelet Shaked is not content that the court lends a hand to the Israeli settlement enterprise and to the violation of the Palestinian population’s rights. She will not rest until she has turned the nation’s top court into a branch of her rightist HaBayit HaYehudi.

The Feb. 22 meeting of the Judicial Appointments Committee had been preceded by an initiative Shaked came up with in an attempt to shift the balance of power on the panel and determine the nature of the Supreme Court in years to come. In short, if the committee refused to approve conservative justices, she threatened to propose legislation designed to override the three justices on the committee and enable the appointment of candidates they oppose, revoking their veto power over the appointment of their peers. Currently, a majority of seven out of nine panel members — Knesset members, Supreme Court justices and representatives of the bar association — is required to approve or reject a candidate, effectively giving the three sitting justices veto power.

Shaked's threat was apparently convincing enough, and this week the high court marched in the direction of HaBayit HaYehudi. As mentioned before, three of the four new justices are considered conservatives: Judge Yosef Elron of the Haifa District Court and Judges David Mintz and Yael Vilner. Mintz will be the second justice residing in a settlement, the other being Justice Noam Solberg. West Bank settlements are considered a violation of international law and even a war crime, hence official visitors from abroad avoid traveling to the settlements.

The right-wing freebie Yisrael Hayom celebrated Shaked's victory with the headline “The Supreme Court changes face.” One might wonder whether Tourism Minister Yariv Levin will like this new face of the court. Levin never misses the opportunity to verbally insult the Supreme Court justices. Considered one of Prime Minister Benjamin Netanyahu’s closest political associates, Levin has claimed that Justice Miriam Naor’s rulings boldly discriminate against Jewish settlement in the occupied territories compared to her rulings involving Israeli Bedouins and Palestinians from the territories. In an interview with Israel Army Radio, Levin charged that the court was being controlled by the “school of the radical left,” a claim that was a natural follow-up to the line consistently taken by Netanyahu, according to which the political left buses Arabs to polling stations on election day to defeat the right, the leftists have forgotten that they are Jews and the left controls the media that incited the judges against “our child,” Azaria.

Azaria is, indeed, a victim. Like all other Israelis, he is destined to live in a country that has elected a bunch of people who regard such concepts as morality, the rule of law and natural law as designed for only one nation and one religion, and preferably, also for one political persuasion.