Will 'conservative' justices deliver for the Israeli right?

Right-wing Justice Minister Ayelet Shaked's declarations of victory in getting conservatives appointed to the Supreme Court might be premature. 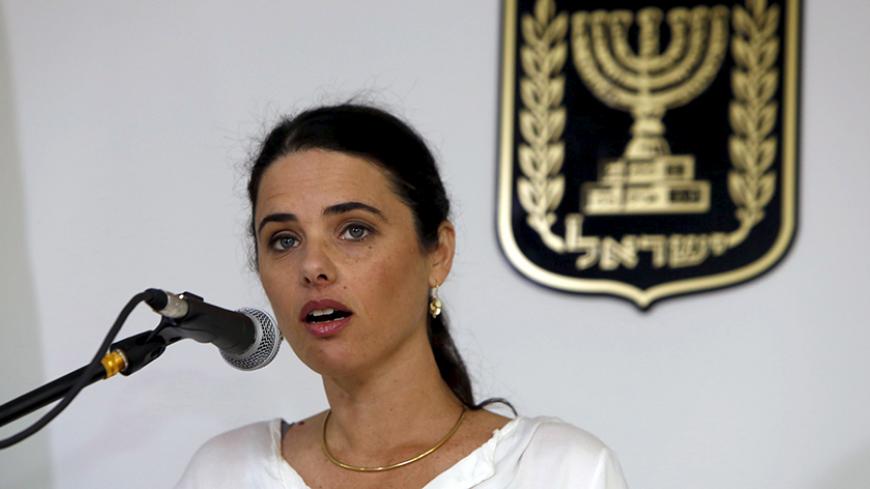 Ayelet Shaked, Israel's new justice minister of the far-right HaBayit HaYehudi party, speaks during a ceremony at the Justice Ministry in Jerusalem, May 17, 2015. - REUTERS/Gali Tibbon

In the political language of the media, Justice Minister Ayelet Shaked waged one of the most brilliant campaigns of the past few years in marketing three out of the four new justices selected to serve on the Supreme Court as a “conservative revolution.” Her public relations machine moved with pinpoint precision on the evening of their selection, Feb. 22. After three months of political infighting and heated legal battles, Shaked scored a victory with the selection of two justices identified with the religious right, Yael Willner and David Mintz, as well as a third of Mizrahi origins, Yosef Elron. The fourth justice, George Karra, is a Christian Arab.

"We made history!” a jubilant Shaked celebrated on her Facebook page the night the new justices were announced, marking her victory over the elitist legal establishment personified by Supreme Court Justice Miriam Naor. In an interview with Channel 10, Shaked said, “For so many years, the judges that were chosen tended to be more compatible with a liberal approach, yet I didn't hear any heart-wrenching cries about that. This time, we, the politicians on the committee, represented the agenda for which we were elected, as it should be in a democratic state.”

It is impossible to minimize the importance of the Supreme Court and its justices in Israel, a country without a written constitution. The court's rulings serve as the society's conscience and moral compass, establishing the basis of the country's values as represented by the vision set out in the 1948 Declaration of Independence by its founders, who hoped to establish a democratic Jewish state with equality for all its citizens.

That is why the possibility that Shaked would change the natural order of things, transforming the Supreme Court into an emasculated, conservative body that acts in the spirit of the settlers and the right, should be worrisome at the very least. It is especially troublesome against the backdrop of the anti-democratic steamroller of recent Knesset legislation and government actions.

The fact, however, is that Shaked's conservative revolution could soon turn out to be nothing more than an exaggerated headline to sensationalize the appointment of new justices. It is true that one of them is a settler, one is a national-religious woman and one is a Mizrahi Jew, whom members of the Judicial Selection Committee reportedly suggested is not “Supreme Court Justice material.” Nevertheless, the bottom line for the new justices is that they are all an integral part of the legal establishment. Cataloging them as foot soldiers in Shaked's revolution does them a disservice.

Willner is the first religious woman to take a permanent seat on the court. She currently serves as a judge for the Haifa District Court and was once an intern for former Supreme Court Chief Justice Dorit Beinish. In other words, she represents the DNA of the Supreme Court with every fiber of her being.

Mintz has been tagged by the media as a “religious settler.” He has a doctorate in law and lives in Dolev. Like Willner, he too interned at the Supreme Court. Elron was the candidate championed on the Judicial Selection Committee by Kulanu Chairman and Finance Minister Moshe Kahlon. Tagged as a “conservative Mizrahi,” Elron, one of nine children, was raised in a transit camp by parents from Iraq. His original family name was Alfarich. Elron, a judge since 1994, is considered drab but efficient. He currently serves as chief justice of the Haifa District Court.

To Shaked's credit, it must be said that she succeeded in shattering the traditional paradigm for Supreme Court justices and making the court a more diverse and pluralistic body. This, in turn, will encourage more communities to identify with the court. There has, in fact, been a decline in the Supreme Court's standing over the past few years, with the public, particularly on the right, having lost faith in it. The court's new diversity should strengthen its status as representing all of society. That in itself is no small achievement.

On the other hand, Shaked's declaration that this was a revolution and the subtext that the new judges will advance a conservative agenda and follow a right-wing political line are pretentious at best. That Mintz is a settler and that Willner is a national religious woman are not guarantees that they will support anti-democratic legislation in the spirit of the current Israeli right and serve as a rubber stamp for the decisions of a right-wing government intended to erode the rule of law. That these judges are part of the right-wing religious community does not transform them into anti-liberals regardless of what Shaked wants us to think.

Shaked and Education Minister Naftali Bennett, the chairman of her party, HaBayit HaYehudi, really do have an achievement they can show off to their voters. One problem is that large swaths of the “liberal” media served as a tool for them to promote their “narrative of the revolution.” For example, on the morning after the judges’ selection, Bennett posted an image of the headline blazoned on the front page of Haaretz, “The Judicial Selection Committee Appointed Three Conservatives Candidates, Who Will Change the Face of the Supreme Court.”

Even former Justice Minister Tzipi Livni of the Zionist Camp helped advance their line without realizing what she was doing. In an interview with Channel 10, she accused Shaked of "wanting a docile court, a court that does not criticize the government and does not impose limits on it." Livni is correct about the intentions of the most powerful woman in HaBayit HaYehudi, but she is also fueling Shaked's political campaign. To the hard right, Livni's sharp criticism only serves to prove that their long arms have already reached the bastion of the left that is the Supreme Court.

The best example of a gap between expectations and actual performance is the political storm that surrounded the appointment of Supreme Court Justice Asher Grunis as chief justice in 2012. His appointment was only made possible after the law was changed so that he could be appointed, even though he would serve less than three years, instead of a full term of six years, before he reached 70, the mandatory age of retirement for justices.

The amendment to the law was initiated by the National Union Knesset faction. They sold the idea of appointing the conservative Grunis by claiming that Grunis was a right-winger and good for the settlers although he had no basis for saying such things. The new law came under heavy criticism, with its opponents charging that it was intended to solidify the right's position on the Supreme Court and make it less liberal. They called it a “slippery slope.” Nevertheless, analysis of Grunis’ years as chief justice indicates that he never initiated a conservative revolution nor did he favor the right. In fact, the right intensified its attacks on the "left-wing” Supreme Court during his tenure.