Israelis prefer to focus on celebrating their country’s 69th anniversary, while ignoring 50 years of occupation and suffering in the West Bank. 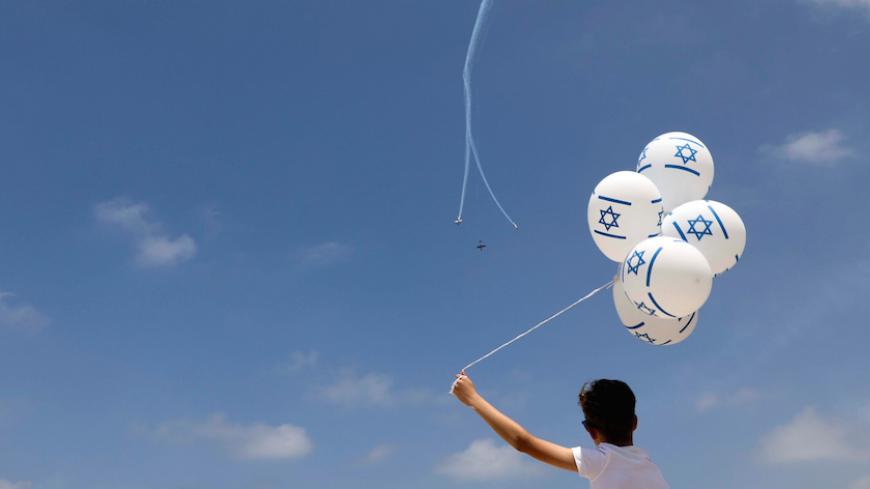 A boy watches the Israeli air force aerobatic team fly over the Mediterranean Sea during an aerial show as part of the celebrations for Israel's Independence Day marking the 69th anniversary of the creation of the state in Tel Aviv, Israel, May 2, 2017. - REUTERS/Ammar Awad

The State of Israel’s 69th Independence Day, on May 2, is overshadowed this year by the 50th anniversary of the Arab-Israeli Six-Day War that took place on June 5-10, 1967. This underscores the fissures gouged in the core of Israeli society by the country’s impressive military victory, which continue to tear it apart.

In the 69th year of the state’s establishment, one part of its Jewish society — under the orchestration of the government — will celebrate the 50th anniversary of the liberation of Jerusalem and raise a glass to 50 years since the liberation of Judea, Samaria (the biblical names of the West Bank) and the Golan Heights. Another part of Jewish society, along with the state’s Arab minority, will mark the jubilee of the forced annexation of East Jerusalem to Israel and its occupation of the West Bank. (For now, the Syrian civil war has removed the Golan Heights from the equation.)

On May 1, at ceremonies marking the country’s national Remembrance Day for Fallen Soldiers, and on the morning on its Independence Day, millions of Israelis sing the national anthem, "Hatikva" ("Hope"): “To be a free people in our land.” Does ruling over another nation make the Jewish people residing in Zion freer than they were 50 years ago? And where is “our land” anyway? Even after 69 years of existence, “our land” does not have recognized borders. There is not even agreement about where they are among the millions of Israelis and Jews who identify with Zionist values, but refuse to take part in the flag parade in the Old City of Jerusalem held annually on Jerusalem Day (celebrating the 1967 unification of the city), and do not celebrate the “liberation of Judea and Samaria and the Golan Heights” captured by Israel in 1967.

On the 69th anniversary of its independence and the 50th anniversary of its splendid military victory in June 1967, Israel is moving away from the realization of the Declaration of Independence crafted by its founders and read on the 5th day of the Hebrew month of Iyar (May 14), 1948. It says the state “will be based on freedom, justice and peace as envisaged by the prophets of Israel.” It also says that the State of Israel will ensure complete equality of social and political rights for all its citizens, regardless of their religion, race and gender. It calls on the Arab people, residents of the State of Israel, to preserve peace and take part in the building of the state based on full and equal citizenship and appropriate representation in all the state’s institutions, both temporary and permanent.

In 1966, on the eve of the liberation/occupation, the State of Israel took an important step toward promoting the freedom of all its people by abrogating the military rule that had limited the rights of the country’s Arab minority. Some 1.8 million Arab citizens of Israel currently enjoy full political rights and play a significant role in the building of the state. But since June 1967, Israel has been using its military might to rule some 3 million other people (Palestinians) who live in the West Bank and East Jerusalem, as well as the 2 million Palestinian residents of the Gaza Strip. Israel holds their fate in its hands, depriving them of their freedom, trampling on their dignity and violating their basic human rights.

“We extend our hand to all neighboring states and their peoples in an offer of peace and good neighborliness, and appeal to them to establish bonds of cooperation and mutual help with the sovereign Jewish people settled in its own land,” says the Declaration of Independence.

More than 15 years have gone by since all the member states of the Arab League extended a hand to Israel in an offer of peace and good neighborliness with their 2002 Arab Peace Initiative. The Arab League confirms the initiative each year anew and continues to extend its hand in peace. But instead of accepting the outstretched Arab hand, Israel has taken the lands it conquered in 1967 and is holding on to them. The word "shalom" (peace) is at best considered a synonym for naivete, and at worst an equivalent of defeatism.

Sixty-nine years ago, the fathers of the Jewish community in Palestine appealed to the United Nations “to assist the Jewish people in the building-up of its State and to receive the State of Israel into the comity of nations.” The 1979 peace agreement with Egypt, the 1994 peace agreement with Jordan and especially the 1993 Oslo Accord with the Palestinians opened the gates of the “comity of nation” to the State of Israel. But the ongoing occupation and the settlement enterprise in those occupied lands are closing those gates in Israel’s face. A good many faithful members of the extended Jewish family (Jews living outside of Israel) are also closing their hearts and pockets to the Israeli occupier, refusing to continue donating money to the Jewish state.

The founding document of the State of Israel promises freedom of conscience, education and culture for all its citizens. The evils of the occupation and the desire to conceal them erode Israelis’ freedom of conscience to the extent of declaring open season on anyone who opposes these evils. On April 26, Deputy Foreign Minister Tzipi Hotovely incited against activists of two human rights groups — B’Tselem and Breaking the Silence — by calling these army veterans and law-abiding citizens an “enemy.” Tourism Minister Yariv Levin compared these two rights groups to the Basque terrorist underground.

Education Minister Naftali Bennett tells the children of Israel that “a nation cannot be an occupier in its own land” and trots out “the biblical narrative” as irrefutable proof of Israel’s ownership of “Judea and Samaria.” School principals and teachers who invite representatives of human rights organizations to address students risk their jobs. Minister of Culture Miri Regev punishes cultural institutions that enable artistic expression of creators and works that deviate from the mainstream.

And despite it all, 44% of the Jewish public in Israel grades Israel’s situation as good or very good, and 39% rate it “so-so.” The Israel Democracy Institute monthly Peace Index, issued at the end of April, found, surprisingly, that two-thirds of Israel’s Arab citizens are pleased with the situation of the state. Their rating of its achievements (except in defense issues) was even higher than that of the Jews. A very large majority (86%) of the Jews and a small majority (51%) of the Arabs are proud of being Israelis.