Why is this year different for Israeli civil society organizations?

As the 50th anniversary of the Six-Day War approaches, some Israeli civil society organizations are rallying efforts to end Israel's occupation of the West Bank. 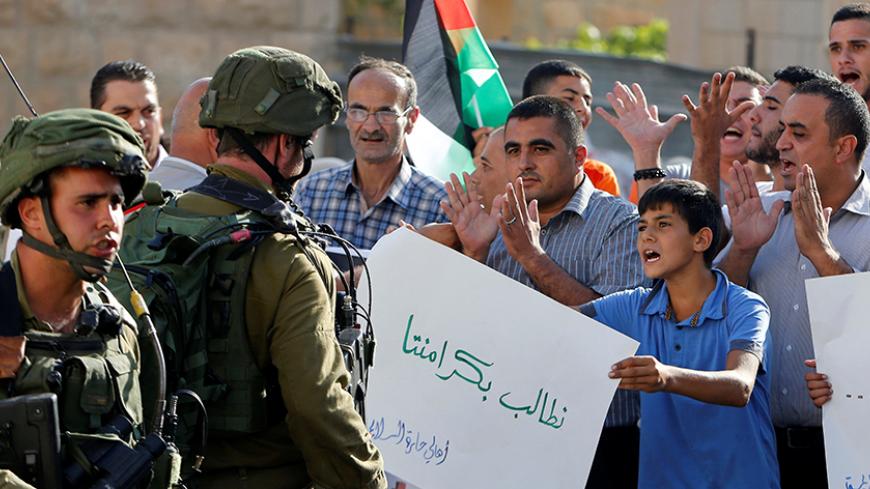 A Palestinian boy holds a sign that reads "We demand our dignity" in front of Israeli soldiers during a protest in the West Bank city of Hebron, Aug. 24, 2016. - REUTERS/Mussa Qawasma

The decision came down from the highest echelons of the Israeli government shortly before the Passover Seder, the traditional holiday meal that enjoys rare consensus among Jews in Israel, bringing together relatives, friends and guests from all over the country and all colors of the political rainbow. Before wishing the people of Israel a happy and kosher holiday, Prime Minister Benjamin Netanyahu announced that a series of events would be held in the coming weeks and months to mark the half-century anniversary of the “liberation of Judea, Samaria and the Golan Heights” — that is, the 1967 takeover of the West Bank, including East Jerusalem, and the Golan in the Six-Day War.

That same evening, several thousand Israelis read a special Haggadah at their Seder dinner. Instead of the traditional rendition of the Israelites’ Exodus from Egypt, they used a Haggadah issued by the organization SISO — Save Israel, Stop the Occupation. In stark contrast to Netanyahu’s policies, SISO, together with other civil society organizations, is trying to turn the 50th-anniversary celebration of the spoils of war into a protest against the 50-year Israeli occupation and a call to end it.

The traditional Passover Haggadah includes a series of questions designed to spark the curiosity of the children about the Exodus story. In addition to offering questions about why this night is different from other nights and the words to “We Were Slaves to Pharaoh in Egypt,” the “Jubilee Haggadah” includes commentary by Jewish thinkers from Israel and the United States. One of the first pages contains a lament penned by the writer Amos Oz in August 1967, some three months after the war.

“We are condemned now to rule people who do not want to be ruled by us,” the noted author wrote in “Davar,” the now-defunct daily newspaper of the then-ruling Labor Party, “condemned, not merry and euphoric.” Oz warned that all occupations corrupt the occupier. “I have fears about the kind of seeds we will sow in the near future in the hearts of the occupied,” he wrote. “Even more I have fears about the seed that will be planted in the hearts of the occupiers.” Like many of his friends on the political left, Oz did not imagine that five decades later Israelis would be “merry and euphoric,” celebrating the “liberation.”

“The Six Day War … completely changed our strategic situation,” Netanyahu pronounced with glee. He did not acknowledge that it had also transformed our moral and diplomatic situation and the state of our democracy. Culture Minister Miri Regev, head producer of the upcoming celebrations, rejoiced on Facebook that the celebrations “touch every Jew, because these lands were always and continue to be the heart of the Land of Israel and an important center of Jewish history.” It leaves one to ask: What about all those Jews for whom the lands that Israel has ruled since 1967 are occupied lands? What about Israel’s Arab citizens who will not take part in the “liberation” festivities, but will be forced to foot part of the NIS10 million ($2.74 million) bill?

There is a reason the right-wing government decided to hold the main event in Kfar Etzion, a settlement established under the Labor government headed by Levi Eshkol. In the platforms of the Zionist political parties, the Etzion bloc is among the settlement blocs proposed for annexation to Israel within the framework of a permanent peace agreement with the Palestinians. Leaders of the opposition parties vying for a win in the patriotism championships — led by the center-left Zionist Camp and the centrist Yesh Atid — will not dare spoil the jubilee, not as long as the Likud enjoys such a broad national consensus.

The protest events against Netanyahu and his government cohorts — Education Minister Naftali Bennett and Defense Minister Avigdor Liberman, who are doing everything in their power to perpetuate the “liberation” — will be left to Meretz, representing the Zionist left, and the Joint List, representing most of the country’s Arab minority. Israel’s civil society has been tasked with most of the protest activity, but it is not an easy job.

Decades of de-legitimizing occupation opponents have borne fruit. Most residents of Israel were born during the occupation. They know no other reality, and most were weaned on a fear of Arabs, often mixed with hatred. Rami Elhanan, who lost his 14-year-old daughter in a Jerusalem terror attack, is one of the activists heading Palestinian Israeli Bereaved Families for Peace. Elhanan spoke publicly April 4 about the derision he encounters when he gives talks in schools alongside a Palestinian member of the organization. Despite such treatment, he said, 620 Israeli and Palestinians families who lost their loved ones are working tirelessly to bring an end to the violence and the occupation.

Elhanan spoke at a seminar convened by peace groups and the Tami Steinmetz Center at Tel Aviv University about the role of peace organizations. In recent years, various groups have managed to get through to entire communities that they had given up on in the past, such as residents of economically disadvantaged towns in the Gaza border area and ultra-Orthodox Jews. For example, Women Wage Peace counts as one of its activists Yahaloma Zechut, a member of Netanyahu’s Likud from the southern town of Ofakim. The Jerusalem branch of Darkenu (Our Way) — a new version of the anti-Netanyahu group V15, which was slammed by the right-wing during the 2015 elections campaign — is run by Pnina Feuer, a young ultra-Orthodox woman.

In addition, former senior security officials, among them Ami Ayalon and Carmi Gilon, both of whom headed Shin Bet, did not hesitate to appear in Jerusalem April 6 at the Barbur art gallery, which had dared to hold an event by the controversial, anti-occupation group Breaking the Silence despite mainstream opposition. Talking at the event, part of the anti-occupation campaign End 50, both men warned against the abyss that the occupation is digging at Israel’s feet.

Ayalon spoke with foreign reporters covering the event about a growing tyranny in Israel. Tyranny, no less! Gilon condemned the government and right-wing elements for inciting against Breaking the Silence, which presents Israel and the world evidence of Israel Defense Forces soldiers harming Palestinians. The British newspaper The Guardian saw fit to devote extensive coverage of the comments by the two “Gatekeepers,” also the name of a 2012 documentary featuring former heads of the Shin Bet who oppose the occupation. The Israeli media, on the other hand, did not write a single word about the event.

Public opinion researcher Tamar Herman of the Israel Democracy Institute noted at the Jerusalem conference that there is no better proof of the importance of organizations like Breaking the Silence, which challenge the “complacency” of Jewish Israeli society, than the vicious war being waged against them by the right. Nonetheless, Herman stressed that ending historic conflicts, especially protracted ones like the Arab-Israeli conflict, is a multifaceted project that civil society organizations cannot conduct alone. Thus, all that is left is to hope that by next year a new leader will rise and liberate Israel from its 50-year war.