US President Donald Trump would like Israeli Prime Minister Benjamin Netanyahu’s assistance in tabling the issue of moving the US Embassy to Jerusalem, but Netanyahu fears the reaction of his right-wing coalition partners. 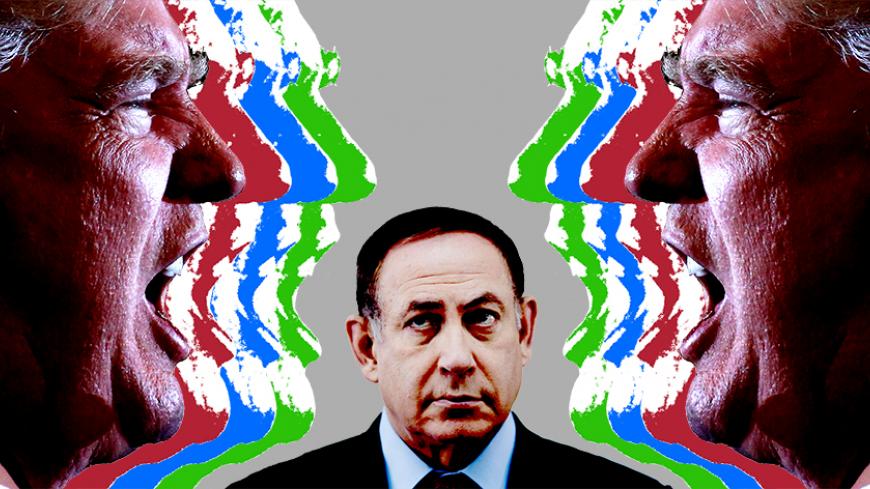 Tension continues to rise with only one week to go before US President Donald Trump's visit to Israel May 22. The Israeli right had originally hoped to turn his visit into a modern-day version of the coming of the Messiah, but the real world refused to cooperate. The blasts of the shofar announcing the Messiah’s arrival have been replaced by a bitter political skirmish with the potential to turn into a real political struggle as soon as Trump leaves, tearing Prime Minister Benjamin Netanyahu's coalition, and maybe even his party, to shreds. It might all happen even before the Trump administration defines its basic principles on the Palestinian-Israeli conflict or puts together a comprehensive peace plan.

The opening salvo was fired right here, in a May 8 Al-Monitor interview with HaBayit HaYehudi Chairman Naftali Bennett. In it, he complained about Israel, i.e., Netanyahu, having made no effort to influence its future or for that matter the incoming president. Instead of filling the vacuum that has emerged between the two administrations, the Israeli government has lowered its head, waiting to find out what lies in store for it. Days later, on May 13 in a press briefing by US national security adviser H.R. McMaster, it was revealed that Trump is considering recognizing the Palestinians' right to self-determination during his visit to the region.

Although Israel has long recognized this right, that has not helped to lower the flames on the right. To the contrary, Bennett actually turned them up, asserting, “We cannot continue to run a ‘bunker’ policy, or Israel’s fate will be decided by others.”

Once again, Bennett rose to explicitly criticize Netanyahu, who continues to maintain radio silence on every step Washington takes. Netanyahu is walking on tiptoe, quietly freezing West Bank settlement construction and restraining himself from pressuring Trump until these days of rage are over or at least until the presidential visits end peaceably.

This game of ping-pong was ratcheted up a notch on May 14, when Secretary of State Rex Tillerson announced that Trump is carefully considering his election promise to move the US Embassy to Jerusalem. According to Tillerson, his deliberations will take into account the two parties' positions, with particular emphasis on the Israeli position, as well as on the question of how the move might affect the peace process between Israel and the Palestinians.

It is not as if anyone in Jerusalem is actually waiting for the embassy to be moved, as much as they might want that to happen. Yet Tillerson's remarks provoked an expected reaction by Bennett, in which he called on Netanyahu “to make it clear that we expect the US administration to move the American Embassy to Jerusalem and recognize a united Jerusalem under Israeli sovereignty.”

In the past, Netanyahu would have responded harshly to such a provocation and issued a brusque statement condemning Bennett. This time, however, he rose to the challenge. Just moments after Bennett issued his statement, the prime minister's office released a statement of its own, calling on the secretary of state to support moving the embassy: “Moving the US Embassy to Jerusalem will not only not harm the peace process, it will advance it by correcting a historical wrong and by shattering the Palestinian fantasy that Jerusalem is not the capital of Israel.”

Netanyahu himself does not believe this — but on the other hand, he is fed up with losing prestige among the right and bleeding voters to Bennett. In other words, the prime minister is stuck between a rock and a hard place, between Israel's right-wing electorate and Trump.

Bennett learned something from Netanyahu in the last 2015 elections when the prime minister gobbled up a significant part of Bennett's electorate in the final days leading up to the vote. Now Bennett is the one eating away at him on the right, drawing clear lines to distinguish himself from Netanyahu by putting indirect pressure on Trump.

In any other circumstance, Netanyahu would back away from the pied piper that is Bennett. The problem is that he is facing Trump, the orange-haired man that no one in the world wants to upset. This includes Netanyahu, who doesn’t want to end up like former FBI Director James Comey.

This sense of awe, not to mention abject fear of Trump, has left Netanyahu paralyzed. He is like a deer in the headlights, utterly unable to move. Bennett's announcement was the electric shock that jolted Netanyahu into action and forced him to release his statement on moving the embassy to Jerusalem benefiting peace.

The drama is also playing out behind the curtains. Tillerson's remarks implied that the Americans were expecting help from Netanyahu. In recent conversations between the concerned parties, the possibility was raised that Israel would either hint at or quietly acquiesce to reports that there are serious security consequences to moving the embassy. Doing so would allow Trump to climb down off his high horse. While Netanyahu did not explicitly confirm that he would agree to such a gesture, he did give it consideration.

The idea was shelved, however, on May 14. Netanyahu's breaking point had been reached: He prefers the calculated disappointment of the US administration over the continued cannibalization of his right-wing voter base by Bennett. How will the Americans respond? It looks like we'll find out in the coming days.

As of now, no one in Jerusalem — or anywhere else, for that matter — knows how determined Trump is to broker the “ultimate deal” between Israel and the Palestinians. As far as Netanyahu is concerned, the deal will be nothing short of a nightmare, and he has to wake up from it somehow. So far, however, that hasn't happened. While he doesn't (yet) miss former President Barack Obama, at least openly, that unfamiliar feeling is starting to stir in the dark. If Trump presents Netanyahu with a cruel choice, the biggest problem that the prime minister will face will be from within his own party.

According to a senior political source who spoke on condition of anonymity, these problems — coupled with criminal investigations against Netanyahu that never seem to ease up — led him to state repeatedly to his associates on May 14, “The current government will finish up its term in October 2019.” This translates as, “Don’t start eulogizing me prematurely. I'm not going anywhere. Anyone who tries to take advantage of this weakness to show off their nationalist and right-wing fortitude will be dealt with severely.”

A week before the leader of the free world pays a visit, Netanyahu is trying to buttress his leadership in Israel. The question is to what extent Likud members buy into it. In other words, what will scare them more: the rage of a scarred and weakened Netanyahu, or the rage of Likud voters solidly seated on the far right and unwilling to hear about a two-state solution or the establishment of a Palestinian state? The sense is that sometime in the near future, all the players in the Middle East will have to decide.