Israeli Prime Minister Benjamin Netanyahu claims that he has no plans to advance the next election, but the leaders of the coalition know that he can make them any time it suits him. 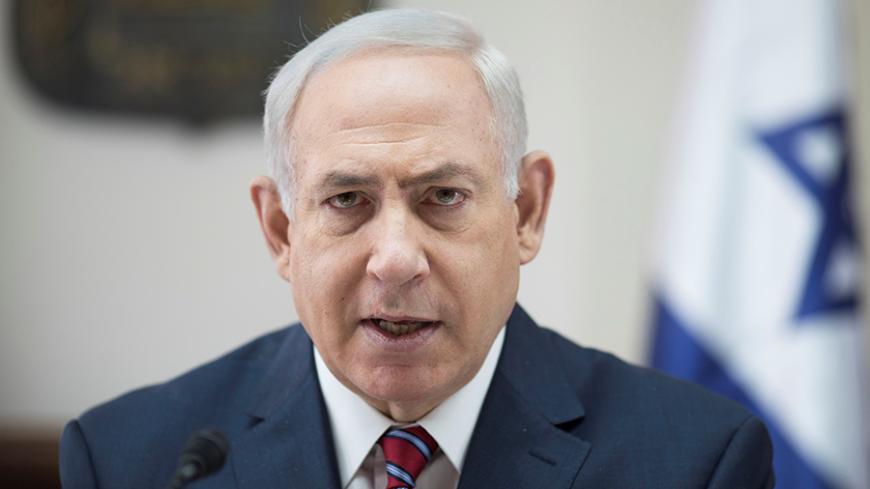 Israeli Prime Minister Benjamin Netanyahu's May 14 assessment that the next election will not be moved up was intended to stifle the buzz in Israeli political circles. According to him, the election will be held as scheduled, in November 2019.

Over the last few weeks, Netanyahu watched as a coalition crisis over Israel's Public Broadcasting Corporation — a crisis for which he was responsible — threatened to see the Knesset dissolved and set his coalition partners into campaign mode. Netanyahu threatened Finance Minister Moshe Kahlon in March with early elections unless the Kulanu chair accepted a compromise on the issue.

Netanyahu released this mollifying message at a meeting of coalition leaders on May 14. That evening, Channel 2 News reported that he even instructed the heads of the Finance Ministry to prepare a state budget for 2019, hinting that the current government is here to stay.

On the other hand, even if it now looks like the prime minister does not want the election moved up, not one of the coalition party leaders takes his statements seriously. It is obvious to all of them that Netanyahu will have no qualms about coming up with an excuse to call an election as soon as it suits him. They also have no way of knowing when that will be.

Throughout his fourth government's tenure, Netanyahu has been waging political fights on two main fronts. The first is with his finance minister, and the second is with Education Minister Naftali Bennett. Neither of them has any interest in advancing the election, either — particularly not Kahlon, who is still recovering from the way that Netanyahu played him politically during the public broadcasting crisis. For electoral reasons, they both want to keep their common front with Netanyahu on a low flame before the next election campaign, but not longer than that.

"It is obvious to everyone that Netanyahu will be the one to bring about the next election. He will decide when to squeeze the trigger," one Likud minister told Al-Monitor on condition of anonymity. He added, "Right now, Netanyahu has no reason to advance the election."

While there has been a cease-fire of sorts on the Kahlon front over the past two weeks, fighting between Netanyahu and Bennett has intensified. The HaBayit HaYehudi leader has been pouring fuel on the fire as part of his fight with the Likud over the support of voters on the right. Once it became clear that US President Donald Trump would not fulfill his campaign promise to move the US Embassy from Tel Aviv to Jerusalem, Bennett has demanded repeatedly that Netanyahu insist the move take place. He went so far as to insinuate that Netanyahu himself is behind the US decision. In an interview with Al-Monitor's Ben Caspit published on May 8, Bennett criticized Netanyahu for his passivity, saying that it prevented the Israeli right from attaining swift achievements immediately after Trump's election, when it seemed like the incoming administration's policy was more in line with that of the Israeli government.

Netanyahu refuses to remain indifferent. The Likud released a response mocking Bennett by claiming that he "memorizes the prime minister's press releases and recites their demands as if they were his own. … That is what he did with the prime minister's persistent demand that the US Embassy be moved to Jerusalem.”

At a Likud meeting on May 15, Netanyahu raised the issue of moving the embassy, referencing Secretary of State Rex Tillerson's suggestion that Israel isn't too excited about moving the embassy, either. In a statement released later, his office said, "Israel's position has often been expressed to the American administration and to the world. The transfer of the American Embassy to Jerusalem not only will not harm the peace process, but the opposite. It will advance it by correcting a historic injustice and by smashing the Palestinian fantasy that Jerusalem is not the capital of Israel."

When the prime minister's office realized that claims that Netanyahu played a role in the shift in the American position persisted, it took the unusual step of releasing the protocols of a conversation between Netanyahu and Trump on Feb. 15. According to the document, Netanyahu made it clear to the president that moving the embassy to Jerusalem would pose no security risk.

Netanyahu realizes that Bennett is already caught up in a battle over voters on the right. He is acting quickly to counter his attacks. Recent reports that Trump plans to pressure Israel into rebooting negotiations with the Palestinians when he visits the region on May 22 offer Bennett a golden opportunity to continue pummeling Netanyahu and score a few points on the right.

On the other hand, even if negotiations between Israel and the Palestinians are restarted, there is still a long way to go before a coalition crisis would put the government at risk. Bennett plans to squeeze all he can out of it by depicting Netanyahu as having betrayed the right. Bennett will not quit the government during the negotiations. Obviously, Netanyahu is extremely adept at negotiating with the Palestinians without ever reaching the implementation stage.

In a Channel 2 report, a senior Likud member was quoted commenting about Yesh Atid Chairman Yair Lapid, who is in a dead heat with Netanyahu, according to recent polls. "It is time to let Lapid dry out in the opposition for another two years, with all the dozens of seats that the polls give him. It would be stupid to advance the election," said the official, who was unnamed. But the truth is that Lapid's impressive results in the polls do not pose a real risk to Netanyahu's right-wing government, since most of his votes come from the center-left Zionist Camp. While the division of votes among the parties has changed, there has been no real change to the party blocs, and Netanyahu has no competitors among the right.

The only thing that currently threatens Netanyahu's survival comes from outside the political system: the criminal investigation into the gifts he allegedly received from businessmen. A dramatic development in this investigation such as an indictment could force Netanyahu to resign. If, however, there is no progress in the investigation, his government could continue to serve until 2019.

At this stage, Netanyahu's preparations for the next election can be summed up as follows. He is sending out feelers to Yisrael Beitenu chair and Defense Minister Avigdor Liberman over the possibility of running together in a single list, like the Likud Beitenu list in the 2013 election. As unviable as it seems, Netanyahu also holds onto the hope that he can convince Kahlon to run together with him. According to one senior member of the Likud who spoke on condition of anonymity, "Netanyahu wants to compete in the next election as head of a large Republican Party and ensure his victory well in advance."