Netanyahu feels on top of the world

Israeli Prime Minister Benjamin Netanyahu multiplies his meetings with Likud activists, as a sign to his rivals in the party that no one can challenge his leadership. 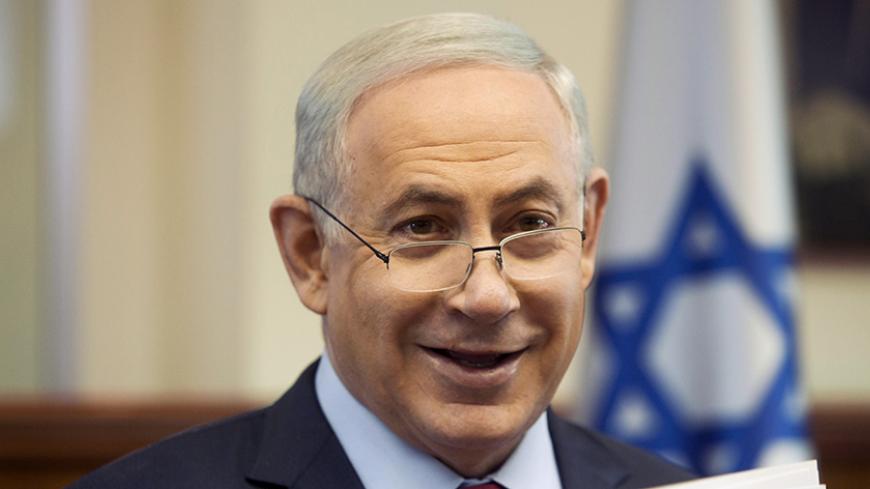 On May 29, Prime Minister Benjamin Netanyahu's convoy pulled up beside the home of Itzik Danino, the mayor of Ofakim and a prominent member of the Likud Party. Dozens of party activists were waiting inside. They had been invited for a private meeting with the prime minister. The mood was excellent, the refreshments were abundant and the people in attendance were treated warmly by Netanyahu. They left feeling flattered, even though nothing of significance was said there.

Netanyahu paid a visit to the town on the country's southern periphery that day to launch a local construction project, together with Finance Minister Moshe Kahlon, but he also used the opportunity for some political "maintenance." He has been doing that a lot recently in other cities in the periphery, which are considered traditional Likud bastions, among them Lod, Givat Shmuel, Beit Shemesh and Acre. These events usually take place in private homes, and attendance is generally limited. All of this is intended to give the guests the feeling that they just had a personal meeting with the prime minister. At Netanyahu's request, his schedule in the coming weeks will be determined in part by visits of this kind.

Anyone who has followed Netanyahu's three decades of political activity in the Likud will know that there are very long periods in which he invests next to nothing in such meetings with Likud activists. This usually changes when there are elections, primaries or other important political tests on the horizon. That's what makes this round of visits to Likud strongholds particularly interesting.

Why does he need this now, when he is in one of the best political periods of his career and when no one in the political arena in general and the Likud in particular is even capable of challenging his leadership?

According to a senior Likud member, Netanyahu is staking out his territory for anyone who wants to take it over from him, whether from within the party or outside of it. Within the party, this is mainly former Minister Gideon Saar, who has announced his intention to run for the party leadership position after the Netanyahu era comes to an end. Saar has plenty of time available, so he is crisscrossing the country. According to the same source, Netanyahu simply enjoys proving to Saar who the boss in the party really is.

Netanyahu’s increased activity in the periphery towns is also intended to prevent the loss of votes to Yesh Atid Chairman Yair Lapid and to Kahlon. Both men have been active in efforts to win the support of Likud voters identified with the moderate right, and they pay frequent visits to Likud Party strongholds.

Netanyahu arrives at these activists’ meetings with an aura of international respectability, especially since his outstanding relationship with President Donald Trump was documented and broadcast to every home in Israel during the presidential visit on May 22-23. He knows that this has the same powerful effect on Likud supporters as his speeches in perfect English, so he fills his Facebook page with photos and video posts of his official travels around the world.

Netanyahu is not only investing efforts into strengthening himself in the field. He has recently increased the number of political meetings he has held with members of the Knesset and other senior party members. Everyone who meets with him is impressed by his high spirits and by his intention to remain in power for many years to come. According to Netanyahu, the next election should take place as scheduled, or in other words, more than two years from now.

Netanyahu's good mood can be attributed to several factors. These include the drawing out of the criminal investigation into his activities, which has not yet led to an indictment, Trump's successful visit and recent polls, which show an increase in support for the Likud and the concurrent weakening of Lapid and HaBayit HaYehudi Chairman Naftali Bennett. Lapid is thought to have the best chance to defeat the Likud in the next election, while Bennett regards himself as a candidate to replace Netanyahu as leader of the right.

Unlike most of Netanyahu's coalition, which relays a sense of tranquility and stability, Bennett is deemed a problem. The relationship between Netanyahu and Defense Minister Avigdor Liberman is on track again, and they are rather close. His big conflict with Kahlon has subsided, at least for now, while Shas leader Aryeh Deri is busy with a police investigation of his own, so he has no reason to bring down the government.

Paradoxically, the election of Trump, the preferred candidate of the Israeli right, had a deleterious effect on the political standing of the HaBayit HaYehudi chairman. He began by celebrating the departure of President Barack Obama and then hailed the rise of Trump as if he was the messiah. Later, however, Bennett discovered that the reality is much more complex than it seems. Right now, Bennett's situation is fragile. While he was elected on April 27 by a large majority to lead his party into the next election, as far as the far right is concerned, he is failing to provide the outcomes they want. The settlers claim that Netanyahu is not building enough in the settlements, not to mention the disappointment by Trump's decision not to move the US Embassy to Jerusalem.

While Netanyahu is benefiting from his excellent relationship with Trump, Bennett is caught in a trap. If he speaks out against Trump, who is considered friendly to Israel, Bennett will be seen as having damaged Israel's relationship with its most important ally. On the other hand, he has been unable to provide his electorate with enough achievements, even though he plays a major role in the most right-wing Israeli government of all times. That's why Bennett has been choosing his words carefully for now, while the leaders of the settler movement — chief among them Yossi Dagan, the chairman of the Samaria Regional Council (the settlements’ umbrella organization) and one of the most powerful members of the Likud — have attacked Netanyahu for failing to build in the West Bank, even hinting that this could have political ramifications.

Netanyahu believes that in the next few weeks, Trump's staff will lay out a working paper on how to move forward with negotiations between Israel and the Palestinians. At that point, the "deal" that Trump put together to end the conflict will be revealed officially. Netanyahu has no plans to be the one rejecting this deal, so he is expected to cooperate. This will be a very sensitive period for his government, since the settlers will demand that Bennett put the brakes on the negotiations. It is quite conceivable that this will lead to a serious coalition crisis.

So far, Netanyahu has proved able to skip between the raindrops. The Likud reacted with uncharacteristic silence to Trump's decision not to move the embassy to Jerusalem. When the Knesset goes on its summer recess at the end of July, the big winner of this session will be the prime minister — even if just a few months ago, with the start of the criminal investigation against him, it looked like he was approaching the end of his political career.