Netanyahu has no diplomatic fig leaf

The setup of the new coalition now being negotiated offers no opening for a renewed diplomatic process, leading Israel into international isolation in a matter of a year. 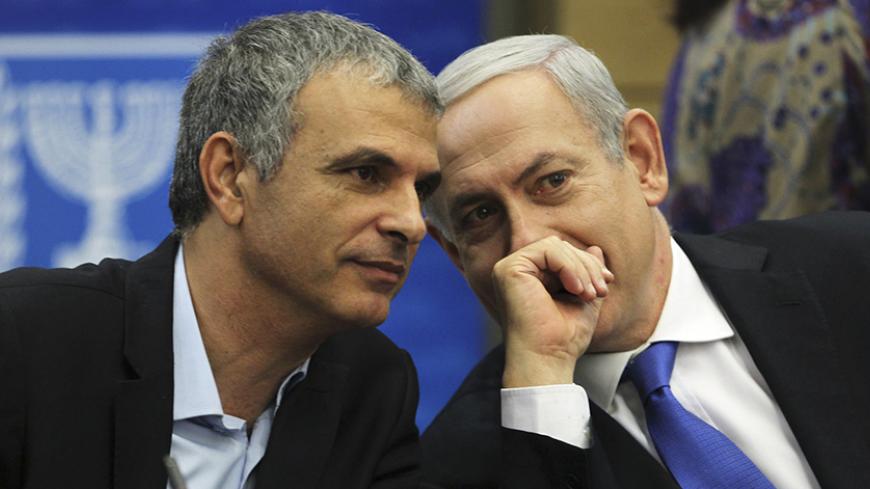 The current estimate is that in just a few weeks, once he finishes putting his right-wing, ultra-Orthodox coalition together, Prime Minister Benjamin Netanyahu will call Zionist Camp leader Isaac Herzog, inviting him to join the coalition. He’ll offer a similar invitation to Yesh Atid head Yair Lapid, too. Netanyahu won’t be doing this out of love or admiration for Herzog or Lapid. He will have no choice.

Netanyahu’s fourth government, which he will be hard at work patching together over the next few weeks, will be the first in which he has no diplomatic “fig leaf” to mollify the international community in general and the Barack Obama administration in particular. His problem is that the chances of either Herzog or Lapid responding positively to his call tend toward zero. They’ll let him simmer in his own juices, become an outcast in the international community, plead like a pauper for every Security Council veto, and try to withstand the tsunami of ostracism and boycotts expected to rain down on him from Europe, all with the express approval of the United States.

Netanyahu insists on having a fig leaf in every government he forms. During his first term, 1996-99, he received "in-house coverage" from Defense Minister Yitzhak Mordechai. Mordechai was a moderate pragmatist, who insisted on keeping an open line of communications with Washington and had an especially warm relationship with the United States. Former Prime Minister Ehud Barak played the same role in Netanyahu’s second government from 2009-13, while in his third government, 2013-15, it was Hatnua head Tzipi Livni, with a dose of Lapid.

Netanyahu’s new government will include Yisrael Beitenu head Avigdor Liberman in his new, far-right incarnation, HaBayit HaYehudi Chairman Naftali Bennett, the ultra-Orthodox parties and Kulanu head Moshe Kahlon. There is no obvious fig leaf among them.

Now, of all times, however, a fig leaf like that is more essential than ever. Now, of all times, after Netanyahu lurched wildly to the right in his campaign, just to survive. Now, of all times, after Netanyahu disavowed his Bar Ilan speech and announced that there will be no Palestinian state on his watch, only to be forced, one day after the election, to summon American interviewers in a panic just so that he could explain to them that he really didn’t take back his Bar Ilan speech after all. That he has remained at the same spot exactly. It is the reality around him that changed, not him.

So who will Netanyahu’s current fig leaf be? Kahlon is a moderate Likudnik, who has recently adopted a pragmatic centrist approach. Ostensibly, he could fill the spot, but it's hard to believe that he would focus on diplomatic issues during his upcoming term. Kahlon is candidate for the finance minister role, which will keep him very busy. His field of expertise is not in the diplomatic sphere. The international arena really is foreign to him. He will not commit political suicide just to save Netanyahu’s neck, whether it is in Washington or Brussels.

Could the responsible adult in the room this time around be Shas leader Aryeh Deri? The chances of that happening are equally unrealistic. On a personal level, Deri really does identify with the center-left. The problem is that his voters are situated on the right. And Deri can expect to receive the Interior Ministry in Netanyahu’s fourth government. It is hardly a position that provides him with diplomatic leverage.

It’s not even worth discussing Bennett in this context this time around, but what about Liberman? He is asking for the Defense Ministry, though it is highly unlikely that Netanyahu will give it to him. If he does give Liberman the Defense Ministry, he will be forced to give Bennett the Foreign Ministry as compensation. Imagine a government headed by Netanyahu, with Defense Minister Liberman seated to his right and Foreign Minister Bennett seated to his left. Israel would be better off in self-imposed exile in Siberia. Liberman also broke far to the right in the campaign, after the police investigation against him blocked his way to the center of the political spectrum. This means that he must continue to align himself with the right, at least for now. It is his base and the sole source of his political energy. Liberman is an unpredictable politician, who is capable of just about anything. He could stay in the opposition or even retire suddenly from political life.

So who is left? It looks like the only viable candidate is Kahlon, and even then, only in part. Netanyahu has yet to meet with Kahlon. Apparently, that meeting is scheduled to take place next week. They’ve already agreed on the Finance Ministry, but Kahlon, without whom Netanyahu has no government, is expected to present a long list of demands and commitments from the new government. He also bears a deep-seated grudge against Netanyahu, who pushed Kahlon out of the Likud upon the success of his popular “cellphone revolution,” when he was minister of communications.

Apart from the professional demands that he will inevitably make, which are vital to the success of his planned reforms (involving banks, the cost of housing and cost of living), he's also expected to make certain demands pertaining to Israeli democracy itself. One of these, for instance, will be the right to veto anti-democratic legislation of the kind that HaBayit HaYehudi Party proposes about twice a week on average. Kahlon will not allow any harm to befall the democratic nature of Israel, the rights of minorities, etc. He is expected to have a powerful ally in the person of President Reuven Rivlin. Rivlin doesn’t care for Netanyahu either, and that's putting it mildly. He will provide Kahlon with whatever public umbrella he needs to maintain his equilibrium.

In any case, the next government will be made up of people who can’t stand Netanyahu, and who would prefer Herzog over him. The only exception is Bennett, also a longtime bitter rival of Netanyahu’s but for whom Herzog is not an option. Liberman is seething with vengeance toward Netanyahu. So is Deri. Kahlon prayed for Herzog to win so that he could join his government. Herzog would have let Kahlon get on with his job in peace and quiet. He would have celebrated Kahlon’s successes along with him. On the other hand, Kahlon knows that Netanyahu will try to trip him up, and even if Kahlon somehow does manage to succeed, he knows that Netanyahu will try to curb that success and take credit for it.

Politically, the new government could actually be stable. It is more or less homogenous on the diplomatic front. There are no irresolvable differences on the social and economic fronts. Any really big problems that could challenge it are likely to pop up from the outside. In my previous article here, I mentioned the “reassessment of relations” that President Gerald Ford’s administration announced in 1975, in all matters pertaining to its policies toward Israel. Just yesterday, March 19, the Obama administration used the exact same term upon learning that Netanyahu had disavowed his Bar Ilan speech and continues to make racist and anti-democratic statements. I wrote about how the Obama administration did not know how to make Netanyahu pay for his antics, and that this enabled Netanyahu to portray himself to the Israeli public as the man who brought Obama down on his knees and be lauded as a triumphant victor upon his return from Washington. Only now that he won the election did the Americans remember to bring up “reassessment.” It was too little, too late.

If Netanyahu does have a right-wing, ultra-Orthodox government, if the peace process disappears from the region once and for all, and if Netanyahu does nothing to try and restore trust between him and the Palestinians, Israel could find itself in diplomatic siege in less than a year. Netanyahu is an experienced individual. He is well aware of the situation. His renewed support for the Bar Ilan speech in the interviews he gave just one day after the election is proof of that. The question is whether he will be imaginative enough to reboot the process. No, this does not refer to the peace process, which is supposed to reach some target or other. No, it refers to the diplomatic process from the famous “Maison de Netanyahu,” which is not supposed to get anywhere, and whose sole purpose is to waste time by trudging along in place.

One such move could be a new Bar Ilan speech from Netanyahu, which emphasizes a regional agreement and the Arab peace initiative. Should he take that route, the only serious problem Netanyahu is expected to run into will be Bennett. At that point (a year from now), he will be happy to replace Bennett with Lapid or Herzog. He can then reboot his government, inject more positive DNA into it, as far as the rest of the world is concerned, and set off on a new path. It is also possible that at that point, Herzog or Lapid will be weak enough to say “yes” to Netanyahu, for reasons of national interest, of course. In that case, Netanyahu can expect a new life, a new coalition and perhaps a brand new start. Until we get there, however, if somehow we do, things will likely be very unpleasant around here.