Bennett: We must tell Trump the 'truth' about peace process

In an interview with Al-Monitor, HaBayit HaYehudi leader Naftali Bennett says that "the age of maneuvering is over" as the Israeli government must be honest with US President Donald Trump about the reality of creating a Palestinian state. 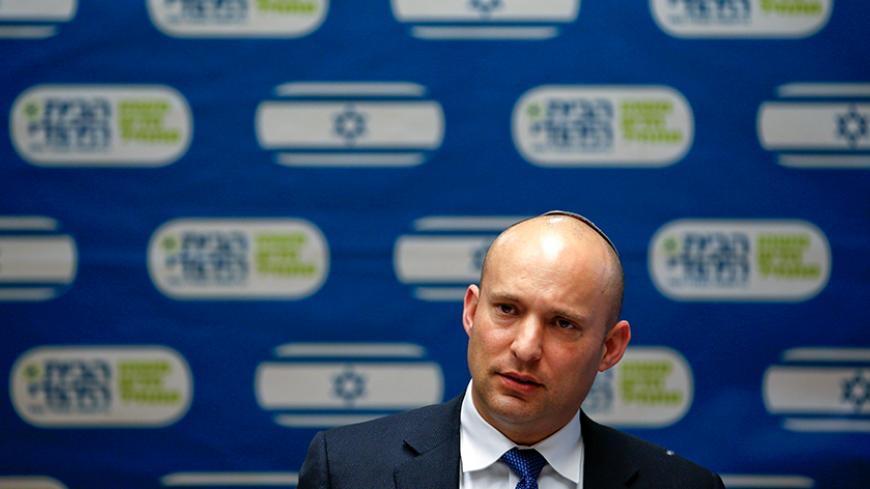 Israel's Education Minister Naftali Bennett is not exactly disappointed with President Donald Trump. He is more disappointed with Prime Minister Benjamin Netanyahu. Reports that Trump is planning a two-state solution and that he wants to revive the diplomatic process so he can reach the ultimate deal to resolve the Palestinian-Israeli conflict have sounded a death knell to the Israeli right's expectations and messianic visions, which considered the prospect of a Palestinian state dead and buried. Bennett, the chairman of HaBayit HaYehudi, laid out his view in detail during an interview with Al-Monitor.

"I expected that this is what would happen if we were passive," said Bennett. "We should have acted as soon as Trump took office and maybe even earlier. There was a vacuum, and we should have filled it, but we hesitated and got the same old template instead."

I asked Bennett what he meant. What exactly should have been done that wasn't done while the Trump administration took shape? "I am the only person in the government of Israel who ever made a business deal in general and a business deal in America in particular," said Bennett. "I lived in the US for years. I know New York and the American business world. I made dozens of deals with the biggest banks in America. What I learned about dealmaking in America from this is to tell the truth, even if it is unpleasant. Don't bluff. I had a very big client near Atlanta, a big bank, and we were supposed to provide it with a computer program costing several million dollars. I saw that we were going to be a few months late on the delivery date. It was a terrible problem. It was a major bank. In the past, we used to fudge it, take our time and come up with excuses. This time, however, I decided to do something different. I called the bank's CEO and told him the truth. We would not be delivering on time and would need another three months. He told me that he was disappointed, but that he appreciated the fact that I told him that straight up. You can do a lot in America, but you have to do it with integrity. You have to tell the truth, and the truth is that a Palestinian state will not be created in the foreseeable future."

"Would you have said it like that to Trump, right to his face?" I asked Bennett.

"Yes, because it's the truth, and I am sure that Trump would be able to appreciate that. The truth is that there is no [feasible] deal. The maximum that we are willing to give and the minimum that they are willing to accept don't jive. As for saying that it's possible, creating hopes and then causing disappointments and, later, violence, I don’t see who benefits from that. President Trump is talking about a deal? Let's talk about the real deal. The real deal is economic peace and expanded [Palestinian] autonomy. That's what there is in the foreseeable future. There won't be anything better than that. All the rest is an illusion, and it will be shattered."

Bennett is the leader of Israel's faith-based right wing (heading the national-religious party). When Netanyahu tells Trump that if he enters negotiations, his government will fall, he is referring mainly to Bennett. In a speech he gave on May 7 at the Jerusalem Post Conference in New York, Bennett surprised everyone by saying, "The left wing doesn't have a monopoly on peace, just like the right wing doesn't have a monopoly on patriotism. I am ready for negotiations without preconditions or preconcessions."

What Bennett's statement means is that he will not bring down the coalition if negotiations are revived. He would only do that if Netanyahu is asked to make significant concessions to revive the negotiations. I told Bennett that this is an important statement for him. "That's right," he admitted. "We decided that negotiations per se don’t bother us like they did under [President Barack] Obama and [Secretary of State John] John Kerry. I am ready to make economic gestures even without negotiations, such as allowing more laborers to come to work in Israel, easing the burden of the checkpoints and things like that. But a freeze on [settlement] construction? No!"

I asked Bennett how the peace that he is willing to talk about would actually look on the ground. After all, he is not ready to concede any territory and establish a Palestinian state. "The peace that I am talking about is based on economics," said Bennett. "What we need is a new Marshall Plan, or if you will, a Trump Plan. As far as I am concerned, peace means first and foremost no war — good life for everyone. It is not necessarily a written agreement. The main emphasis should be economic and entrepreneurial. Right now, there is no Palestinian economy. Israel is an entrepreneurial superpower. It's more than just high tech. Innovations and entrepreneurship could contribute significantly to the Palestinian economy. We will create a free tourism zone. We will be very flexible when it comes to the border crossings. Instead of five hours, it will take 20 minutes to cross, or even five minutes. We will bring economic prosperity to the Palestinians and a good life to everyone. The sky is the limit. Apart from the state that has already been created in Gaza, there will not be another state. In the future, we could consider the possibility of a confederation with Jordan. Under no circumstances should we annex [all] the Arab population of Judea and Samaria [West Bank], just Area C [under Israeli civil and security control], where the vast majority of the Palestinian population does not live. We should focus on the quality of life instead of trying to get written agreements. It's time for us to do that. It has been lying right in front of us for all these years."

While Bennett has not launched a full frontal attack on Netanyahu, it is obvious that this is the line he will be taking over the coming year. He will attack Netanyahu at every opportunity for giving up in advance on efforts to convince Trump to consider new ideas outside the box.

"The age of maneuvering is over," said Bennett, referring to all the games Netanyahu played with Obama for the past eight years. "It was right to do it then, at that specific time, but I don’t think we're there anymore. Right now, all that maneuvering is causing us more harm than simply telling the truth would. With this president, under these circumstances, all we have to do is simply tell the truth. Anyone with a modicum of common sense would understand that."

While Bennett didn't say it, he and many others like him are concerned that Netanyahu will try to play Trump too. The cost of such a mistake could be much steeper than the negligible price that Netanyahu paid for the eight years of misery he made Trump's predecessor in the White House endure.