Lapid on peace talks: 'Our role is to back the prime minister'

In an interview with Al-Monitor, Israeli Finance Minister Yair Lapid says that the main role of his party within the coalition is to make sure that the Israeli government remains committed to negotiations with the Palestinians, calling US Secretary of State John Kerry "a very fair mediator." 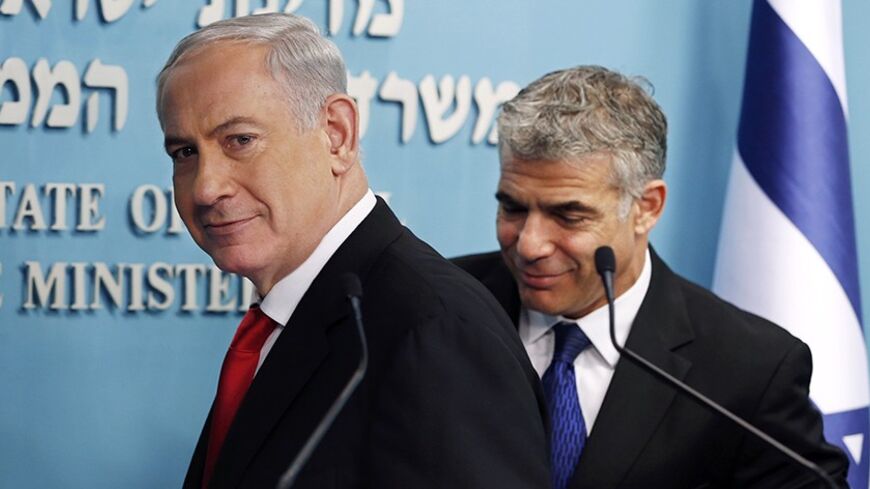 Exactly one month has passed since the chairman of the Yesh Atid Party, Minister of Finance Yair Lapid, took his involvement in the diplomatic process up a notch. Since then, the negotiations with the Palestinians have kept steady on his agenda. Lapid’s diplomatic frenzy began with a long post on his Facebook page on Dec. 8, in which he explained how critical a diplomatic agreement is for the Israeli economy. Later, he devoted entire speeches to his commitment to reaching an agreement with the Palestinians. On Jan. 6, he began his faction’s meeting by calling on the prime minister not to miss an opportunity to reach an arrangement, “which will enable us to separate from the Palestinians.”

Judging by the most recent polls, his increasing involvement with the diplomatic negotiations, which Lapid preferred to underplay at the start of his political career, has actually been good for him. A poll conducted by Israeli TV Channel 2 earlier this week gave his Yesh Atid Party 14 seats. This could indicate that the party’s long decline in the polls since the last election has finally been halted. While it is still five seats short of Lapid’s remarkable achievement in that election, it is good news for someone whose political eulogy had already been written.

Over the past few weeks Lapid has discovered that his constituents want to see him play a more dominant role in the diplomatic arena, and that they regard his alliance with Economy and Trade Minister Naftali Bennett and the HaBayit HaYehudi Party as unnatural. The advantage of this, as far as Prime Minister Benjamin Netanyahu is concerned, is, of course, the chance that this political alliance, which was a real nuisance to him at the start of his term, will ultimately disintegrate. The disadvantage for the prime minister is that as of now there is a large force within his coalition that will pressure him to make progress in the negotiations with the Palestinians. The balance of forces within the coalition is becoming less comfortable for Netanyahu, who is trapped between a government that demands a significant diplomatic process and his own party, of which large swathes are trying to sabotage that process.

During an interview with Lapid, which took place last Monday in his Knesset office, he was more than happy to discuss the diplomatic issue. Later that day, he was scheduled to hold a phone call with US Secretary of State John Kerry. Despite the pessimistic mood that has accompanied these negotiations since they started, the minister of finance is convinced that this time there is a real chance of reaching some tangible achievement.

When I ask him if John Kerry isn’t too naive, Lapid immediately answers.

Lapid:  Absolutely not. He is a lot more intelligent than people think. He is very sharp, and he is very familiar with all the details. He understands both us and them. Sometimes it is hard to determine whether it is some hypothesis that he doesn’t understand the issue, or if it is just wishful thinking. He understands exactly what is going on, which is why he leads this the way he does. It is his approach to say, 'I’ll sit you down again and again and again.' When you sit down that many times with the world’s greatest superpower, it eventually creates commitments that cannot be avoided.

Right now, neither of the sides can tell the Americans, 'Listen, that doesn’t work for us.' After all, Kerry has already been here more often than he’s been to any other country. The world’s greatest superpower — you only realize how dependent we really are on it when you sit in the Security Cabinet — committed itself on such a level that it commits you as well. In that sense, they are doing a good job. And they are doing one more thing. Kerry constantly talks about a position paper, which should be submitted. It is already clear to us that there will be a position paper.

Al-Monitor:  The Likud Party suspects him of being one-sided, or in other words, that he is taking the side of the Palestinians. I hear the same thing from senior cabinet members.

(Lapid is unable to explain why Kerry is so ambitious about this.)

Lapid:  I really have no answer for that. You can see how passionate he is about it. Maybe it is because in the end, every politician wants to be remembered as a Mandela.

There has been considerable tension in Lapid’s relationship with Netanyahu over the past few weeks, which only intensified over their big quarrel as to who would be appointed to chair the Knesset’s Foreign Affairs and Defense Committee. Each side wanted to appoint its own candidate to the position. The two sides are still standing firm in their respective positions, and it has been a long time since that important committee had a chairman. Nevertheless, people close to Lapid claim that despite everything, the two men work well together.

Al-Monitor:  Do you have any red lines regarding the diplomatic process? Does Netanyahu know what they are?

Lapid:  I don’t like ultimatums I announced before the elections that we would not sit in a government that does not conduct diplomatic negotiations. The government is conducting diplomatic negotiations. You don’t want to give your own government an ultimatum, because then you are helping the Palestinians. I don’t want to help the Palestinians. I am on the side of the Israelis. Therefore, it would be wrong for me to set red lines in the middle of the negotiations. But everybody knows that we will not allow the government of Israel to let these negotiations disintegrate. That is a general statement to the outside world, and it is a statement that has details behind it, when sitting in a room to hold a discussion, or as part of the diplomatic steering committee, or within the cabinet.

Al-Monitor:  Do you feel like you are kept up to date?

Lapid:  I also speak to Kerry. Last time I met with him. This time I’ll be talking on the phone with him a little later. I talk to the Americans all the time. And the diplomatic steering committee meets to discuss what to do. Some things are also brought before the cabinet. This means that I am sitting at all the critical junctures and know what is really happening.

Al-Monitor:  Do you believe that Bibi [Netanyahu] entered the negotiations wholeheartedly and willingly?

Lapid:  I don’t think any of us entered these negotiations wholeheartedly and willingly. Obviously, it tears us up inside. You want to reach an arrangement so that we can part ways with the Palestinians, but any such arrangement comes with a cost that we would rather not pay if we could avoid it. "Two states for two peoples" may be nothing more than a sentence, but behind that sentence lies the evacuation of tens of thousands of people from their homes and from a place that for me, with my family history — I come from a home that aligned with the nationalist camp — is really part of our homeland. I can tell you which prophet walked on which hill. In that sense, everyone is uneasy about it. But we have to do it so that we can separate from the Palestinians.

Al-Monitor:  Do you think Bibi is going there?

Lapid:  I am not a pundit. I’m a player, so it would not be right for me to say where it is heading. There was also a decision, which I consider to be correct, that of all the people involved in the negotiations, the only person who may say where we stand is John Kerry. That’s how it should be, too. There is so much gossip and so many rumors all around us, and that’s fine. It comes with the territory. And the Palestinians are a little less disciplined than us in these kinds of things.

Al-Monitor:  What do you think about their commitment to the negotiations?

Lapid:  At least once a month the Palestinian finance minister and his entire team comes to meet me in my office, and we go over all sorts of issues, from border crossings to their debts to the electric company. What is amazing is that the Palestinian finance minister comes from his office in Ramallah, and when you ask him how his ride was, he answers, "There was a lot of traffic today. It took me 40 minutes." Then you remember that this whole conflict is between peoples who are just 40 minutes apart.

Al-Monitor:  Let’s say that all the parties manage to reach agreements and produce a position paper. Can Netanyahu survive that politically, both within his party and with his right-wing coalition?

Lapid:  It is no secret that the same coalition will not necessarily remain intact, though it is possible. This will be the biggest test faced by the State of Israel since the Yom Kippur War. It could have an impact on the makeup of the coalition.

Al-Monitor:  Would you be willing to accept the ultra-Orthodox Shas Party into the coalition for that big test?

Lapid:  I don’t play games, and I am not playing around with that. It is too serious, as far as I am concerned. I don’t put coalitions together, and I don’t take coalitions apart. There is a prime minister, and that is his job. We have defined what our role is: Our role is to ensure that this won't disintegrate.

Al-Monitor:  What are you doing to ensure that it doesn’t fall apart?

Lapid:  That’s not something you talk about to the media. … We provide the broad backing for it. It wouldn’t happen without us. We make it possible. That has been our role from day one. Our role is to back the prime minister.

Al-Monitor:  But can you now say that Bibi knows what your red lines are?

Lapid:  What kind of question is that? In the end, the most fundamental and stable axis in the government is the axis connecting the Likud-Beitenu Party with Yesh Atid. It makes up the majority of the coalition.

Al-Monitor:  Let’s end with the polls. Getting involved in the diplomatic process has been good for you.

Lapid:  It is interesting how no one remembers that during the election campaign, I went to Ariel [settlement] to deliver a speech about the diplomatic process. I was greeted by young demonstrators from the Meretz Party and the [settlers] Hilltop Youth, who presented such a united front that it was really touching to see, all because I said that the settlement blocs should remain part of Israel, but that we have to separate from the Palestinians. What I am saying today is what I’ve been saying all along. I just started being vocal about it because that is what will always happen when it becomes necessary. There was a moment, and there still is a moment, in which we must make perfectly clear that there is a commitment behind that. So I am vocal. When that is no longer necessary, I’ll be happy to go back to dealing with issues pertaining to the Finance Ministry.