Iraqi Christians demand the reconstruction of the Mar Mattai and Mar Behnam monasteries in the Ninevah Plains. 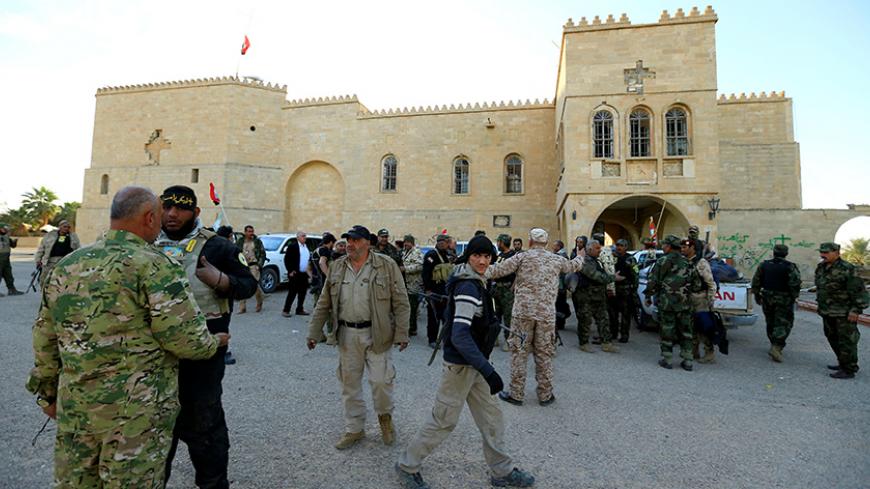 Fighters from Kataeb Babylon, a Christian group that fights alongside the Popular Mobilization Units, gather at the Mar Behnam Monastery after it was recaptured from the Islamic State, Ali Rash, southeast of Mosul, Nov. 21, 2016. - REUTERS/Thaier Al-Sudani

BAGHDAD — A new era has started in the northern Ninevah Plains, known for its ethnic and religious diversity, following the expulsion of the Islamic State (IS). IS took over the area in June 2014 and forced the Christians living there — estimated at more than 100,000 — to abandon their farms and towns and head to the neighboring Kurdistan Region and other areas in the country, or to leave Iraq altogether.

On May 16, the heads of the Christian churches told the media of their “concerns over the possible return of terrorism” and demanded that “the areas of the Ninevah Plains be protected by the United Nations and enjoy autonomy.” This fear, however, has not prevented many Christians from returning to their farms and cities and practicing religious rites in their monasteries and churches. During the Easter mass April 15 at the Mar Mattai Syriac Orthodox Monastery in Ninevah, Christians prayed for the safe return of the displaced to their homes and the spread of peace.

IS reduced several monasteries and churches to ruins, and Christians in the Ninevah Plains are demanding that plans be made for their reconstruction, especially for the monastery of Mar Behnam. It dates to the fourth century; IS occupied it in 2014 and bombed it in 2015. They are also calling for the reconstruction of the Mar Mattai Monastery, founded more than 1,600 years ago.

Yonadam Kanna, a Christian member of parliament, told Al-Monitor, “IS besieged the Mar Mattai Monastery in 2014 and prevented people from getting to it. So the first thing I did after the liberation of the Ninevah Plains was to restore the road leading to this monastery through the slopes of Mount Maklub, on top of which the monastery is built. [The monastery] extends over about 1 kilometer [0.6 miles] at a height of 2,400 meters [7,874 feet] above sea level."

Kanna said, “The security forces along with some volunteers have started to remove the words engraved by IS on the walls of the monastery of Mar Behnam and other churches inciting the killing and displacement of Christians. The monks' rooms are being renovated after IS turned them into rooms for the detention of civilians. Crosses have also been raised [on the grounds].”

He added, “IS destroyed about 40% of the Mar Behnam Monastery; this calls for government support and funding to turn these sites again into places of worship and religious tourism centers. The government needs to develop a strategic program to restore Mar Behnam and Mar Mattai in conjunction with the return of visitors.”

However, Faleh al-Shammari, the director of antiquities in Ninevah, told Al-Monitor, “It is still premature to think of a strategic reconstruction project due to the war and the financial crisis.”

Still, he said, “Local volunteer teams have begun to remove the debris in the monasteries and churches and started to paint the facades of the Mar Behnam Monastery. The Directorate of Antiquities is preparing a special program to redevelop Mar Mattai Monastery, which is a historic site of interest to humanity and is frequented by visitors from all over the world.”

Shammari said, “Ecclesiastical organizations from Europe visited Mar Mattai Monastery this month and expressed their willingness to participate in the restoration of Christian monuments in the Ninevah Plains. In addition, during a UNESCO meeting last month in France held in the presence of the Iraqi minister of culture, an agreement was reached over the reconstruction of Mar Behnam and Mar Mattai.”

Shammari said, “The main objective is to have tourists from all over the world return to visiting these places like they used to before the IS invasion of Ninevah.”

Christian Bet-Nahrain Democratic Party leader Yousif Yacoub told Al-Monitor, “The government should swiftly reconstruct Mar Behnam Monastery in Qarqosh, which had been turned into a training camp by IS. It should also reconstruct the churches of Mosul that were turned into IS headquarters and the Mar Mattai Monastery, which was besieged after the historical road leading to it was threatened. These places have become a national symbol and not only a religious one; victory over IS will only be completed once these symbols are reconstructed.”

Yacoub said, “The Christian institutions in Europe have to fund the reconstruction of these churches to maintain the Christian presence in the Middle East.”

As for the role of the Christian Waqf Foundation, Media Director Hani Kasto told Al-Monitor, “The waqf formed committees to study the reconstruction projects of the Mar Mattai and Mar Behnam monasteries."

He added, "Before the start of the reconstruction process, it is the duty of the government to restore confidence in the hearts of the Christians in their homeland and state by focusing on strengthening security in the Ninevah Plains and reassuring the population that the state is strong and that terrorist and extremist organizations will no longer return to the region.”

Yacoub said, “The security authorities reinforced security guard posts at the entrance to the Mar Mattai Monastery and reinforced security measures around Mar Behnam and the other churches. There are international promises to rebuild the churches in Ninevah. These promises remain within the context of symbolic support rather than real reconstruction projects.”

So long as the extremist ideas planted by IS remain rooted in the behavior and beliefs of many people in the Ninevah Plains, the situation of the Christians in the area will be of concern, even amid tightened security measures.

Before the reconstruction of the monasteries, churches and places of worship in the Ninevah Plains, cultural and intellectual rehabilitation is required, so that a culture of moderation, coexistence and tolerance can emerge.