Despite the liberation of the Ninevah Plains, very few Iraqi Christians have returned to their historical homeland, while the majority of them refuse to return due to security concerns. 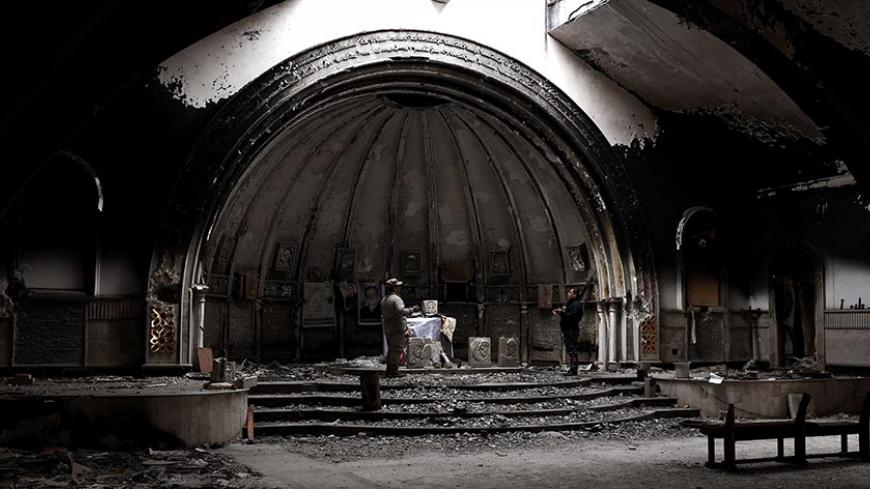 BAGHDAD — With the liberation of most of the city of Mosul in northern Iraq from the clutches of the Islamic State (IS), which took control of the city in June 2014, some of the displaced Christians began returning home. However, many Christians refuse to return, preferring to remain in the Kurdistan Region, Baghdad or abroad, for fear of suffering the same fate of displacement and captivity once again.

Chaldean Patriarch of Baghdad Louis Raphael Sako voiced concerns about the Christians’ return June 18, saying in a press statement, “We have security concerns after the liberation of the land.”

On Oct. 28, 2016, Chaldean Archbishop of Erbil Rabban al-Qas said, “Christians prefer staying in Kurdistan rather than returning.” However, over the past few months, several Christian clerics have been calling for the return of Christians to the Ninevah Plains.

According to a field investigation in early 2017, after the liberation of the Ninevah Plains, many Christians were uncertain about going back.

“However, this does not mean that some of them are ready to return no matter the situation and the conditions,” priest Yaacoub al-Bartali told Al-Monitor. “I am longing to return to the city of Bartala in the Ninevah Plains. But strong sentiments are not a sufficient drive to return as I still fear IS and the extremist forces that might seek revenge.”

He added, “The most important thing that the Christians have lost in their forced migration is not property and land, but the trust in the sons and daughters of neighboring Sunni Arab areas and villages, who have joined IS.”

He noted, “Some promises made by ecclesiastical organizations and the government have yet to see the light. If it weren’t for the meager aid of humanitarian organizations, those who live in Mosul today would not have survived.”

This appeared clearly through the opinions expressed by Christians living outside the country. Ayad Kule, a young Iraqi who was displaced in 2014 to the Netherlands, told Al-Monitor via Facebook, “Returning to Mosul is difficult in light of new social conditions. Many of my neighbors chose to side with IS based on an ideological conviction. I'm working now, and my return to Mosul means I would lose my job.”

He added, “Iraqis living outside Iraq — including non-Christians — refuse to return even to the areas where security is stable, such as Baghdad and the central and southern regions, let alone Christians.”

Since 2003, many Christians have left Iraq, which reduced the number of this community inside the country with about 50%, to 1 million.

“Faced with the dilemma of refusing to return, projects and solutions that transcend the financial aspect to social and cultural plans are necessary," Luis Caro, a Christian member of parliament in Iraq, told Al-Monitor.

He said, “How is it possible that Christians return home while explosive devices are still planted in their areas. Christians must be informed that the security forces are able to protect them now. The situation is not the same as before when the withdrawal of security forces made them an easy prey for IS.”

He added, "Christians will be persuaded to return to Iraq if they receive a financial compensation to restore their destroyed homes and churches.”

Caro noted that job opportunities must be provided to those returning to Mosul and the Ninevah Plains. “This can be done quickly by recruiting an appropriate number of young Christians in the security forces and deploying them in their places of residence until the security situation is fully restored,” he said.

Perhaps this understanding is in line with the actions of Christian armed factions affiliated with the Popular Mobilization Units (PMU).

On Oct. 23, 2016, these factions raised the cross over the churches of the city of Bartala in the Ninevah Plains after its liberation, asserting that from now on they will defend their cities themselves.

In addition, there are those who believe that the return of the Christians is conditional on the establishment of a Christian province in the Ninevah Plains.

Nizar Abdel Sattar, a Christian Iraqi media figure and author, focused in his book “Yuliana” on the Christians of Iraq as an integral, deep-rooted part of Iraq and highlighted their suffering throughout history.

He told Al-Monitor, “The vast majority of Christians now find sanctuary and work in the Kurdish areas, Europe and the United States. They are very reluctant about returning home, given the absence of any guiding government actions. In general, the Christian community in Mosul is a rural community and Christians generally do not receive the adequate protection and assistance from the legislative and executive branches in Iraq. Therefore, the Christians’ return today depends on purely social efforts.”

Rayan al-Kildani, the secretary-general of the Christian movement Babylon Brigade affiliated with the PMU, told Al-Monitor, “The most important thing is to distance Christian areas from political and sectarian conflicts and ward off all forms of demographic changes.”

He added, “It is necessary to bring about a societal reconciliation that allows coexistence between nationalities and religions and heals the deep psychological scars left by the violent practices of forcing Christians to change their religion.”

It seems initiatives in this respect are being launched. On June 7, the youth of Mosul launched an initiative to encourage the return of the city's Christians by cleaning a number of churches and monasteries, while activists raised the largest cross in the city.

A document issued by the office of the governor of Ninevah on April 23 revealed the formation of a supreme committee tasked with stopping the confiscation of Christian homes in Mosul and giving them back to their rightful owners.

Thus, it is necessary to set the appropriate security, social and economic conditions in Christian areas before calling on Christians to return.