Christmas without Christians in IS-liberated Mosul

Mosul's second Christmas after its liberation from the Islamic State is a far cry from its past celebrations — the few churches that have been repaired remain empty. 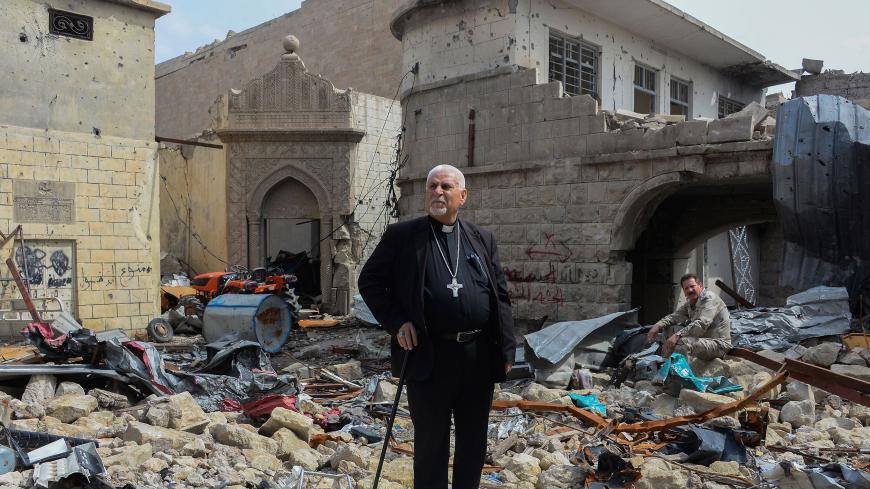 Father John Botros Moshi — the Syriac Catholic archbishop of Mosul, Kirkuk and the Kurdistan Region — stands among the rubble of the Tahra Church in Mosul, Iraq, April 29, 2018. - GETTY/Zaid al-Obeidi

MOSUL, Iraq — Christmas remains a sad affair in Mosul, a city that once hosted a lively Christian community, even two years after its liberation from the Islamic State (IS).

This is largely because most of the Christians who fled five years ago have not come back and few churches have been renovated to bring back the Christmas spirit of the past, Samer Elias, a Christian Iraqi researcher and writer, told Al-Monitor.

Elias’ book, "Mosul Churches, History and Pain," which was published in November, documents how Mosul’s churches and other Christian heritage sites were destroyed by IS. Elias calls on the Iraqi authorities to allocate more financial resources for the restoration and reconstruction of these churches, pointing out that the current process is very slow.

“Only one church has been rebuilt in Mosul — the Chaldean Church of St. Paul in al-Muhandisin district. The reconstruction was financed by the Chaldean Patriarchate, in cooperation with an Italian institution. UNESCO is currently working on the construction of two churches in the western part of Mosul — the Dominican Fathers Church known as the Our Lady of the Hour Church, and the Syriac Immaculate Church,” Elias said.

But even the recently renovated Chaldean Church of St. Paul remains deserted during the festive season, as most of the Christian community still has not returned to Mosul.

The head of the Gilgamesh Center for Antiquities and Heritage Protection in Mosul, Faisal Jaber, told Al-Monitor that the Christians are hesitant to return because of the security situation. “Just the reconstruction of churches with no guarantee of stability is not persuading the Christians to return,” he said.

Jaber expressed concern about the current government's policies toward the Christian heritage in general and misappropriation of Christian property in particular. He gave as an example the case of the Organized Crime Directorate at the Ministry of Interior’s intelligence service that uses Al-Nasr nunnery and neighboring monasteries as their headquarters.

He believes that the use of a religious site by a government security service without paying the owners rent further strengthens the fears of the Christian community that “the IS ideology” is dominant and the Christians are still a vulnerable minority.

Elias also spoke of other practices that cause both anger and anxiety among Christians, such as using destroyed churches as waste dumps or holding concerts there — both considered as unrespecful to the sanctity of places of worship.

In addition, the Christian church authorities do not give a single, unified message to the Christians on whether they can return.

Christian leaders are aware of the complex situation and say they face repetitive questions by their community on whether it is safe to return. “Today we are all called to have a deep spiritual reading of the prophets’ texts and words, to discover the rich meaning in our faith and [to gain strength from what] we went through during IS' occupation of our towns in August 2014. … Our homes were destroyed and we were displaced. We lived for over 3½ years in camps away from our towns. The towns were liberated in 2017 and the reconstruction process has begun, although it is a bumpy road filled with challenges,” Cardinal Mar Luis Rafael I Sacco told Al-Monitor.

Though he tries to motivate Christians to use the spiritual experience in the Old Testament to find strength, Sacco said he understood the hesitation to return. “The church cannot overlook the extent of the human suffering the displaced have gone through during the time of their displacement," he noted.

On the political level, the cardinal expressed belief that the issue of return requires “a political consensus between the countries of the region and the central government as well as the Kurdistan Region."

"Any demographic change is not acceptable because our properties and homes are neither for acquisition nor for sale," he added.

Christians have come to realize that their return is a challenge that cannot be faced alone and requires coexistence with other communities in the region.

Based on this, the head of the Department of Endowments in the Ministry of Endowments and Religious Affairs in the Kurdistan Region, Khaled al-Bir, stressed the need to preserve all religious heritage sites without any discrimination.

This approach holds an important message, as it reveals that the rebuilding of churches is an integral part of the process to rebuild trust between Christians and the various components of the city. This also requires raising awareness among the city’s Muslim community about the importance of Mosul’s religious heritage, which is not associated with Christians alone.