Iran’s judiciary chief attacks the president over his campaign promise to free the leaders of the Green Movement. 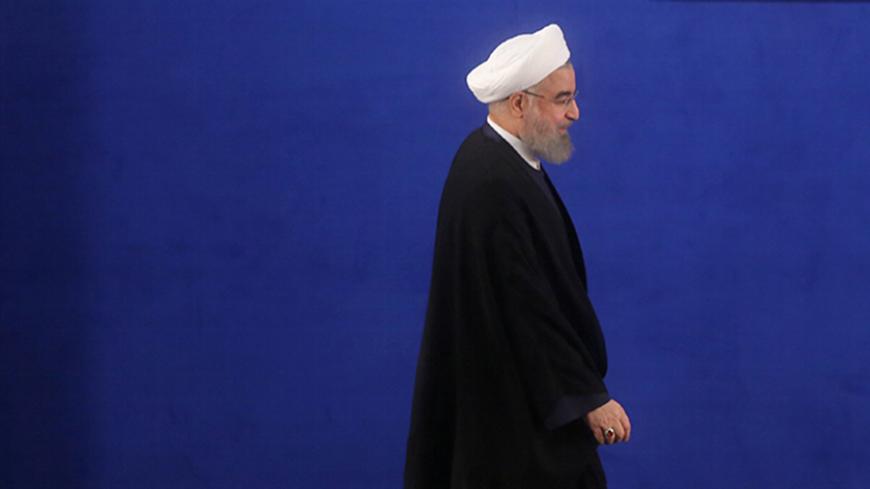 Iranian President Hassan Rouhani appears at a news conference in Tehran, Iran, May 22, 2017. - TIMA via REUTERS

On May 29, Ayatollah Sadegh Amoli Larijani, the head of Iran’s judiciary, railed against moderate president Hassan Rouhani for his campaign promise to free the leaders of the Green Movement.

After the 2009 presidential vote, which led to the re-election of hard-line President Mahmoud Ahmadinejad, Reformist candidates Mir Hossein Mousavi and Mehdi Karroubi objected to the results, saying the vote was rigged. After continuous protests across Iran, the opposition leaders were put under house arrest in 2011.

Larijani added, “We are warning the media and those who are reiterating such issues in concert, imposing pressure, to stop this lest the judiciary itself step in to put a firm halt to this.”

He said, “Suppose that the Supreme National Security Council repeals its own decision and lifts the house arrests [of Mousavi and Karroubi]. In this case, the judiciary’s duty to pursue this matter will begin.” What Larijani hinted at was that following the possible release of the opposition leaders, they would be put on trial. It should be noted that some conservatives have said execution is one possible verdict of such a trial.

In reaction to Larijani’s comments, Abdollah Ramezanzadeh, who served as government spokesman under the presidency of Reformist Mohammad Khatami (1997-2005), tweeted May 29, “What a surprise; [Larijani] addresses the head of the Supreme National Security Council, [and says] 'Who are you to intend to lift the house arrests?'"

Rouhani served as secretary of the Supreme National Security Council between 1989 and 2005, and has since 2013 headed the council, the top decision-making body in Iran, in his capacity as president.

Moreover, Mohammad Bagher Nobakht, the current government spokesman, said May 30, “In the structure of the Islamic Republic of Iran, power is divided between the three branches. The president must exercise his authority. The head of the judiciary shouldn’t express these kinds of views.”

Nobakht continued, “The meetings of the Supreme National Security Council are being held regularly and the judiciary chief is a member of [the council]. If he takes part in the meetings, these meetings are the best place to discuss these issues.”

In an audio file recently circulated on social media networks, Mahmood Nabavian, a member of the hard-line Endurance Front, is heard saying, “America has said that the banking relationships [with Iran] would be established if you hand over [Quds Force commander] Qasem Soleimani handcuffed to us. Unfortunately, the minister of Rouhani’s government went there and committed himself to the US and returned [to Iran].”

In response, Foreign Ministry spokesman Bahram Ghassemi slammed Nabavian for his comments and threatened to file a legal complaint against him. Meanwhile, a short clip of Zarif was released in Iranian media in which the foreign minister speaks about his more than two-decade-long and close relationship with Soleimani.