Did Rouhani sell 'grand bargain' with US to Iranian voters?

At a campaign rally, President Hassan Rouhani said Iranian officials are ready to negotiate with the United States on non-nuclear issues. 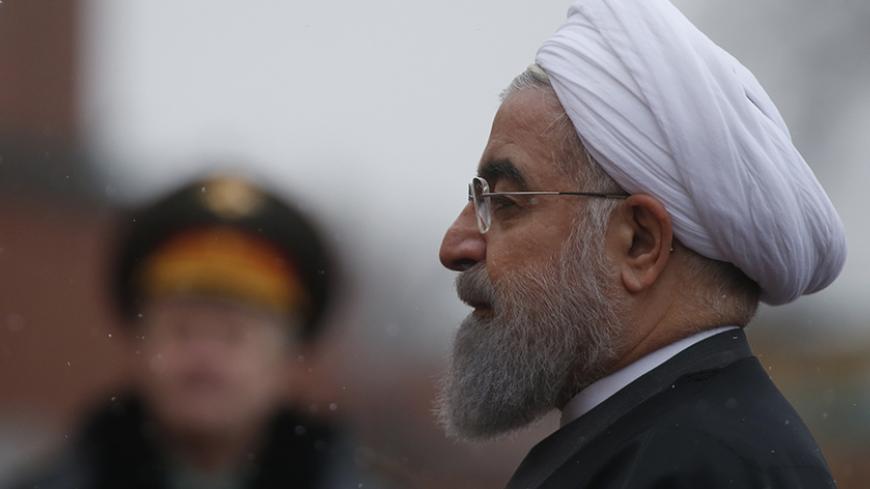 Iranian President Hassan Rouhani attends a wreath-laying ceremony at the Tomb of the Unknown Soldier by the Kremlin walls in Moscow, March 28, 2017. - REUTERS/Maxim Shemetov
Arash Karami
@@thekarami
May 14, 2017

The nuclear deal between Iran and the six world powers ended a decadeslong crisis that removed sanctions on nearly 80 million Iranians and potentially averted another military confrontation in the Middle East involving the United States. The talks to reach agreement on a deal required bilateral negotiations between Iran and the United States, at the foreign ministerial level, breaking a three-decade taboo on direct negotiations between the two countries.

While it was clear that US President Barack Obama had sought an opening with Iran — he shook hands with Foreign Minister Mohammad Javad Zarif behind closed doors in New York — Iran’s leadership, in particular the supreme leader, Ayatollah Ali Khamenei, never trusted the opposing side enough to allow discussions to go beyond the nuclear file.

Today, with the United States continuing to maintain non-nuclear sanctions against Iran, thus hindering foreign investment in the country, President Hassan Rouhani is making a pitch, to the public and to Khamenei, to pursue additional talks with Washington to resolve outstanding issues.

“With a wall of sanctions, they created distance between ‘half of the world’ and the world,” Rouhani said at a May 14 campaign rally in the historic city of Esfahan, once the capital of the Safavid Empire and in a proverb referred to as “half of the world.” Rouhani added that tourism in 2013, before the deal lifted some sanctions, was less than that recorded in April this year.

Referring to the nuclear deal, the Joint Comprehensive Plan of Action, by its Persian acronym, BARJAM, Rouhani said, “We established a bridge between Iran and the world with BARJAM. If the Iranian people allow it, if the supreme leader supports and guides it, with Dr. Zarif the rest of the sanctions can be removed.”

Rouhani's statement was not a fluke. During the third and final presidential debate on May 12, Rouhani made similar comments on being prepared in his second term to remove the remaining sanctions against Iran. For someone who served as secretary of the Supreme National Security Council for 16 years, Rouhani was well aware of what he was saying: Any negotiations concerning the broad list of US sanctions on Iran, whether in regard to Iran's missiles program or human rights, will need Khamenei's permission to proceed.

It is a smart campaign strategy for Rouhani to dangle further talks with the United States with the aim of lifting more sanctions in front of the Iranian public. A large number of voters likely support such an effort. In addition, Rouhani has clearly put the burden of moving to eliminate the sanctions on the supreme leader's shoulders rather than on his own. While the lifting of nuclear-related sanctions has alleviated pressure on Iran’s struggling economy, many European firms remain fearful of investing in Iran due to the remaining US sanctions, some of which threaten to punish third parties that violate them.

This would not be the first time that a discussion of a “grand bargain” between the United States and Iran has been broached. In the early 2000s, during George W. Bush’s presidency, Zarif, as Iran's ambassador to the United Nations, and the highest-ranking Iranian official in the United States given the absence of an embassy there, was reportedly involved in behind-the-scenes exchanges that sought to resolve a number of issues with Washington.