While Iran's 2013 presidential election focused primarily on foreign policy issues, this year's election is all about the economy. 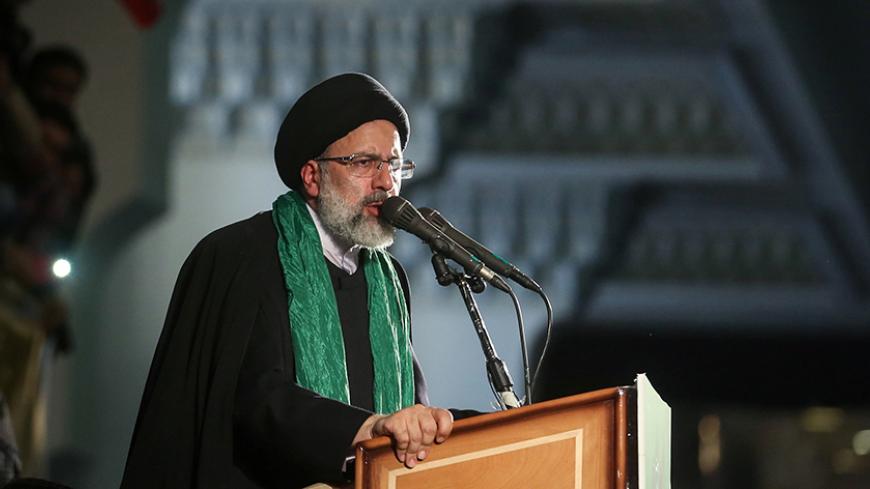 Iranian presidential candidate Ebrahim Raisi speaks during a campaign meeting at the Mosalla Mosque in Tehran, Iran, May 16, 2017. - REUTERS/TIMA

Iranian presidential candidates are wrapping up their final days of campaigning as the May 19 vote draws near. The economy has taken center stage this year, in contrast to the 2013 election, when the presidential debates focused on foreign policy and nuclear negotiations.

Indeed, none of the three televised debates in recent weeks were devoted to foreign policy. Instead, the candidates discussed foreign policy alongside domestic policy and cultural issues in the second debate, which aired May 5 on Iranian state television. The candidates have also seemed uninterested in foreign policy matters in their broader campaigning. Apart from incumbent Hassan Rouhani, whose four-year report card is a clear indication of his foreign policy performance, his key rival Ebrahim Raisi, the custodian of the holy shrine of the eighth Shiite Imam, appears lost in this field.

During the 2013 presidential election, Tehran Mayor Mohammad Bagher Ghalibaf — then a presidential candidate and now a Raisi ally — made a campaign appearance on Iranian state TV and said: “What part of the law permits me to say what I think in terms of foreign policy? Foreign policy is something the establishment decides on. Of course, the president also has a key and influential role in it, but the law does not give the president the whole share [and say] in foreign policy. No one can say that they will change [the country’s] foreign policy in [the span of] four years. Anyone who says they will make massive changes if elected is making false promises and voicing a [mere] slogan.”

However, this time around, Ghalibaf, who stepped aside in favor of Raisi on May 15, had a different approach toward foreign policy and entered the election with a revised view. In the May 5 presidential debate, he said, “In diplomacy, we need to consider both diplomacy of power and negotiation as well as general and economic diplomacy. If today the government truly says that it has been successful in foreign policy, it is because we were first successful in power diplomacy. Today we need to pursue economic diplomacy. My plan is to have a Ministry of Foreign Affairs and [a Ministry of] International Trade whose priority will be economic diplomacy [focused] on [our] neighbors and regional countries. There is a 400-million [-strong] market in the region that we need to pay attention to. We have to change our approach.” Ghalibaf, however, did not elaborate further. Indeed, his campaign focused on the economy and tackling unemployment.

Alireza Samoudi, a professor of international relations at Qom University, told Al-Monitor, “Ghalibaf only sufficed to [express] some generalizations and said that relations with neighboring countries must improve. But this is not an issue that can be solved with talks; this is not to mention that unless we have close relations with Europe, it will not be possible to solve differences with our neighboring countries either.”

Commenting on foreign policy issues during the May 5 debate, Raisi, Rouhani's main conservative rival, said, “We must ask the Foreign Ministry to place economic issues — [especially] those related to the ‘Resistance Economy’ — on its agenda in order to provide export markets for Iran’s products.” Raisi also criticized the Joint Comprehensive Plan of Action (JCPOA) and the Rouhani administration’s performance in regard to the nuclear deal. “The main critique that can be made about the government regarding the nuclear issue is that it portrayed itself as empty-handed during the [nuclear] talks," he said. "Given the weakness the [Rouhani] administration has shown the other side, there is no way it can cash the ‘JCPOA check.’”

It seems as if Raisi’s key foreign policy adviser is Saeed Jalili, Iran’s former chief nuclear negotiator from 2007-2013. Jalili met with Raisi on April 22, and one day later he announced his support for the conservative cleric. Jalili has consistently opposed the nuclear negotiations that took place under the Rouhani administration — both before and after the July 2015 deal was signed. In this vein, some speculate that if Raisi is elected president, Jalili will be his top choice to head the Foreign Ministry. The former nuclear negotiator does not appear to believe in alleviating tensions with the outside world; rather, he seeks to challenge the current world order. In a live presidential debate in June 2013, then-candidate Jalili said, “One of the key debates in foreign policy is that we do not accept hegemony in the world and want to challenge it. The Islamic Revolution is in fact based on this principle.”

Jalili further stated in the 2013 debate, “Drifting between right and wrong does not mean moderation or moving away from extremes. When something is invalid [wrong], it is wrong for people to walk in the middle and say they are taking the path of moderation." (Moderation was the key campaign slogan of Rouhani.)

Nosratollah Tajik, Iran’s former ambassador to Jordan, said a Raisi victory would "take our foreign policy back" to the era of former President Mahmoud Ahmadinejad. In the 2013 presidential election, he said, "Foreign policy was a hot topic for discussion. However, this time, with the good measures that Rouhani has taken [in foreign policy], the candidates have not even felt a need to present a foreign policy agenda during their campaigns and have only spoken about diplomacy.” Echoing Tajik’s remarks, Samoudi told Al-Monitor that the revival of past policies is on the table if Raisi is elected, since he is surrounded by “forces from Ahmadinejad’s foreign policy team.”

If Raisi is elected, Iran's foreign policy agenda will likely be very different from what it is today. In particular, the issue of whether to seek closer relations with Europe will be seriously challenged. The Rouhani administration’s foreign policy successes — coupled with the popularity of Foreign Minister Mohammad Javad Zarif among the Iranian public — have prompted conservative rivals to avoid broaching a subject that is seen as a strong point for the government, preferring to attack the government on the economic front.